Hey, ho, fans!  This week I want to take a look at a little more recent comic book, but one that you’ve likely never seen, but one I think highly of!  And what exactly is that comic?  Glad you asked!  It’s Boneyard # 1, published in 2001 by NBM Publishing.  And the this little comic book is the work of artist, Richard Moore.  He’s responsible for the writing, the pencilling, the inking and even the lettering!  And if this would have not been a black and white comic, he probably would have been responsible for the coloring too!

The series ran for twenty-eight (28) issues, plus a swimsuit issue that was un-numbered and published between issues nine (9) and ten (10).  It was published quarterly beginning in 2001 and ran through 2009.  It could be classified, I guess, as a “horror spoof”, or maybe a “funny horror” comic.  It’s hard to put an exact label on this little gem.  Here is the cover to the first issue: 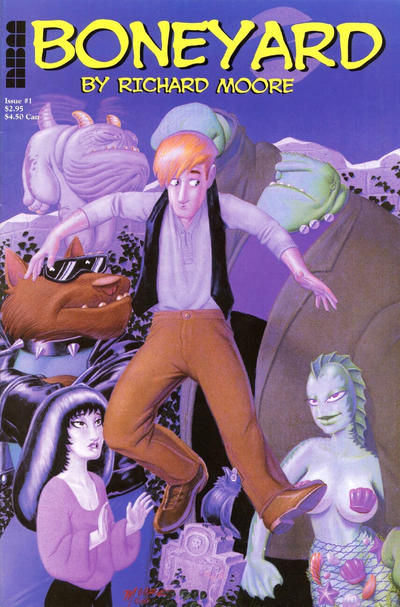 The first issue begins with our hero, a regular “normal” guy on the road to Raven’s Hollow, where he has recently inherited some property from his recluse uncle.  His name is Michael Paris, but he prefers to be called, simply, Paris!  His intention is to quickly sell the land, take his money and get back to his life, but his car breaks down on the way and he’s given a lift from a kindly stranger.  But said stranger won’t drop him off any closer than a mile or two away for some reason.  Paris car troubles are a recurring plot line within the series.

Paris hikes into the town of Raven’s Hollow, which seems to be under some sort of dark cloud.  This is made very apparent on page three, as Paris steps from bright daylight into shadow as he crosses the city’s limits.  He soon finds all of the town’s inhabitants gathered in the town’s center, where they are being directed by the mayor to gather up their torches and matches and follow him.  Besides the torches, the townsfolk are carrying hand made signs that say things like; Undead Go Home, Freaks Get Out & Just Say No To Evil.

Paris introduces himself to the mayor and the mayor quickly tries to get Paris to sign off on the sale of the land, but Paris is hesitant to do so.  The mayor suggests Paris accompany the mob (I mean townsfolk) out to the property in question, saying that there is an “evil in our midst”.

Paris soon discovers that his inherited property is actually the town cemetery, known as Raven’s Hollow Boneyard!  The townsfolk are met at the Boneyard, first by Leon & Boris a couple of talking gargoyles, and soon after, by other residents of the Boneyard.  And who are these other residents?  First off there is Abbey, a vampire, Ralph, a werewolf who always wears sunglasses, Sid, an animated skeleton, Hildy, a Scottish witch, Glump, who is a minor demon, Nessie, a amphibious female figure similar in shape to the Creature from the Black Lagoon and her husband, Brutus, who is similar in appearance to Frankenstein’s monster!

The mayor and the townsfolk and the Boneyard residents nearly come to blows and it is Paris who has to stand between them shouting for everyone to stop, or he’ll “Sue every last one of you!!!”  Well, that gets their attention and things calm down.  The mayor offers to put Paris up, at no charge, and the Boneyard residents offer a shallow grave for Paris to say in, as well.  Needless to say, Paris opts for the hotel room, but promises he won’t be swayed by the mayor’s offer of free room and board and that he’ll give every consideration to both sides before deciding whether to sell or not.

Next we see Paris being woken up during the night by a persistent knocking.  But’s it’s not someone at the door offering more free stuff, it’s Abbey knocking at the window, where she is hanging upside down.  She explains she is a vampire, but that she won’t bite!  She wants to take Paris back to the Boneyard, so that he can hear the other side of the story, knowing that the mayor has likely used lots of pressure to convince Paris to sell the property to the town!

Paris agrees and they are walking back to the cemetery getting to know each other a little, when a car attempts to run them down.  Abbey pushes Paris to safety, but is struck down in doing so.  The last page is a full page illustration of Abbey lying in a pool of blood.  And that’s how the first issue ends!  A pretty heavy cliffhanger, eh?

I’m sure it’s no spoiler to let you know that Abbey is okay, and she continues to play a large role in the Boneyard comic book, as well as, in Michael Paris’ life!

As I said earlier, the book is published in black and white, rather than in color.  Frankly I think this works well and it allows Richard Moore’s art to be shown off.  Though I know some people are turned off by black & white comics, for some reason.  Moore’s art is a little “cartoony”, but I also think that works to the advantage in this particular comic.

Anyway, something different for you all and I definitely recommend it for those that like their comics a little more light-hearted and also enjoy the horror milieu!  Give it a try, you just might find yourself agreeing with me!

See ya next week …