It’s Friday, so it must be time for another Fabulous Find!  This week I’ve pulled out some small plastic figures that were only available from your local McDonalds‘ restaurants.  Yep, this beauties were the happy meal toys from back in 1991.  They feature Warner Brother cartoon characters with snap on super-hero costumes, featuring DC Comics heroes and heroines!

As I said, you had to purchase the McDonalds’ happy meals each week to collect each of the available characters.  I do not remember the order in which the characters were released, but there were five figures in total, though I only have four of them.  Personally, I only thought that the four I have, were worth hunting down, but I’ve gone on-line nd snagged a picture of the fifth figure so I can show the complete set for your eyes here, twenty-three years later.

So in no particular order, here’s my Fabulous Finds for this week!  First up, Super Bugs, i.e. Bugs Bunny in Superman’s costume:

Next up, we have Daffy Duck dressed in a Batman costume, now named; Bat Duck:

Next we have Taz Flash, or as you can see the Tasmanian Devil sharply displaying a Flash costume: 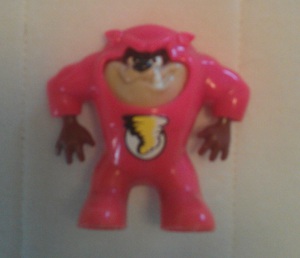 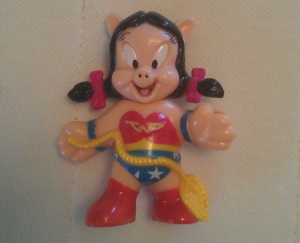 I’ve never been a big collector of McDonald happy meal toys, but back in 1991, I made the effort to pick these beauties up each week.  And a bonus picture of all four of the heroes:

As I stated at the beginning there was a fifth toy, but it was one I wasn’t interested in, or maybe that’s just how I’m remembering it.  Maybe I just couldn’t find the last one!  But it doesn’t really matter, does it?

As promised here’s the fifth toy, it’s Bat Duck in his Batmobile: 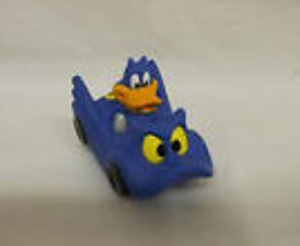 Bat Duck in the Batmobile

And here’s a picture of this toy next to the Bat Duck/ Daffy Duck figure for size comparison: 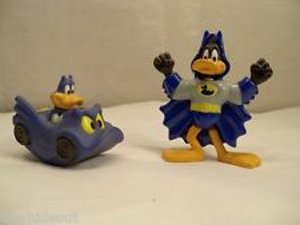 And looking at that final pictures, it doesn’t even look like the Batmobile wheels even touch the floor or surface.  Maybe it was meant to float, with the curved undercarriage?  Anyone out there have that particular toy in their collection?  What do you think?

Well that’s this week’s column.  Short but, I hope, sweet!

Is there any collectibles you’d be interested in seeing here in my Fabulous Find column?  If there is, please leave me a comment below, and I’ll see if I have it in my collection, or if not, I’ll see what I can find out on line, and share it with everyone here!

Take care and I’ll be seeing you …