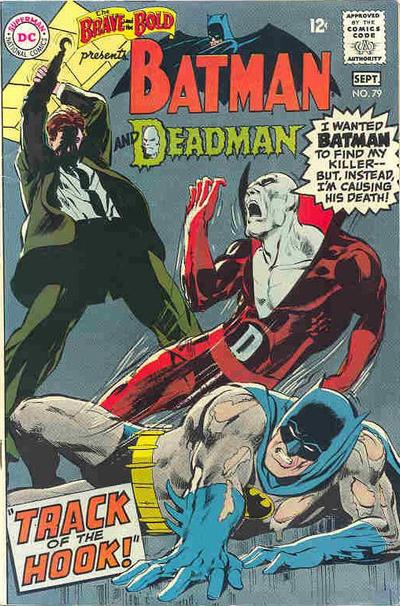 Welcome back to this week’s Retro Review.  Today we’re looking at D C Comics’ The Brave And The Bold # 79 cover dated September 1968.  It features a very nice Neal Adams’ cover of Batman and Deadman facing off against Deadman’s killer, the Hook!  The story is entitled; “The Track Of The Hook” and is written by Bob Haney with both pencils and inks provided by the above mentioned, Neal Adams.

The story opens with the Hook commiting a murder on the very first page, in a well drawn, five horizonal panel, splash page.  An unusual splash for 1968.  And page two features the “normal” full page splash and shows the reader Commissioner Gordon and the Batman investigating, with Deadman floating in the background shouting out to Batman that “No murder is ever routine!  Every life counts!  Means something!  Every killings gotta be avenged!”  Though Gordon and Batman cannot hear Deadman’s rant, as he is intangable and not inhabiting a body at the time.

A newspaperman appears with a couple of photographers and puts the Batman on the trail of the new mysterious leader of the Crime Syndicate known as, “The King“!  Gordon and Batman disagree on the identity of “The King” when a witness appears and says he saw a man with a hook for a hand was the killer, which garners Deadman’s interest.  Deadman inhabits a man’s body and tries to persuade Batman into following up on the Hook lead, but has to abandon the body once he starts physically fighting Batman!  Deadman bemoans the fact that no one knows who Deadman is and then “leaps into” Batman’s body to save him from being run down and gunned down by gangsters!

Alfred appears with a car, grabs Batman and whisks him back Wayne Mansion, where he inadvertly reveals Batman’s secret identity to Deadman.  Deadman makes a tape recording retelling his story, that he is the spirit of Boston Brand, a circus aerialist who was shot and killed.  He then leaves Batman’s body.   Batman plays the tape and decides to help this bodyless spirt receive vengeance.  Working in an assortment of available bodies, one at a time, which he possesses briefly along the way, Deadman assists the Batman in the investigation.

Batman and Deadman track down the killer from page one, only to discover that his hook is fake!  So this killer is not Boston Brand’s killer, but capturing him leads Batman to discover the true identity of “The King”, though I won’t reveal that here.  It turns out both Commissioner Gordon and Batman were wrong!  The Crime Syndicate King is taken down and Deadman leaves a final message for the Batman; “Next Time We’ll Get Him!  Thanks Buddy!”, thus ends the the Batman/Deadman team-up and the very first time Neal Adams provided art for a full Batman story

It’s a nice little story with excellent artwork, therefore I give it four (4) out of five (5) Legion Flight Rings!  Definitely worth seeking out and adding to your collection in it’s original format, though it is also available in a couple of reprint additions, as well.