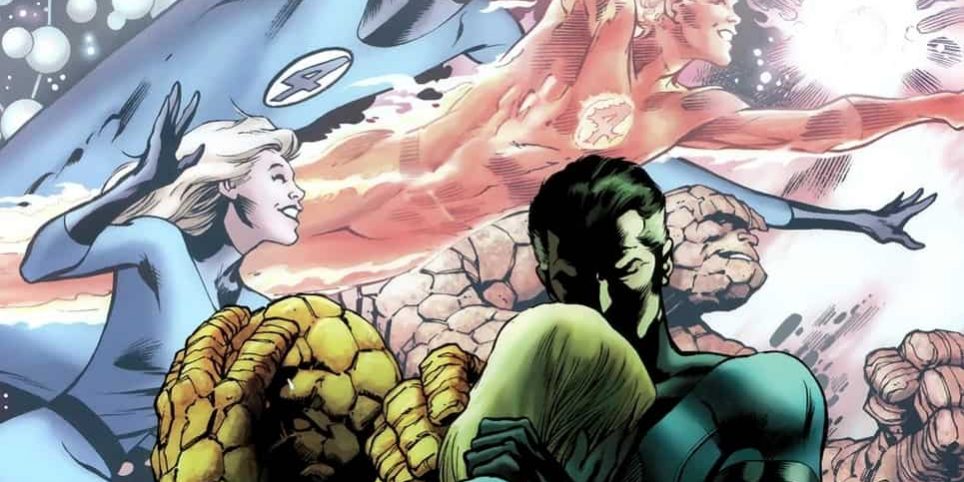 His flame went out. It’s better to burn out than fade away. He went down in a blaze of glory. He went up in smoke.

Those are all of the clichés that immediately come to mind when thinking about the fate of Johnny Storm, whose apparent demise was chronicled recently in Fantastic Four. I thought I’d get them out of the away so I’m not tempted to use them later.

So, we all saw Johnny’s fate coming, right? When a writer kicks off a story entitled 3 in a comic called Fantastic Four, the odds-on guess as to what that means was that someone would no longer be on the team. And since retirement or quitting to take a job at a car wash were unlikely and very mundane reasons to create a multi-issue arc, it’s a pretty safe bet to presume that one of them is going to get whacked. Especially since, in modern comics, getting whacked nowadays is like, well, getting whacked. In the gut, or the head, or the groin. You’re down for awhile, you need to recover, but eventually, you come back. In comics, death has become an injury. I’m sorry, Mrs Richards, your brother is dead, but he’s expected to make a full recovery.

There is no risk associated with the idea of killing a character anymore. Making a character appear to be dead has long been a fictional story device, and employing such a device was always good for two surprises; the character’s apparent death, and the subsequent return. But somewhere along the line, the idea became overused and as consumers, we became wise to it. Especially when the character was a protagonist in a recurring serial medium; we knew he would be back, well, because he had to be. Took us awhile to figure that one out, but we did it, yessiree.

So as consumers’ expectations were raised, confident that a major recurring character would never really be killed, storytellers had to up the ante. Now, if they were going to make it look like a character was dead, he really had to be killed. For real. Permanent like. Dead. Dee ee dee, dead.

Eventually, this was put into practice. And I think for a time, when such a character was killed off, the creators planned things a little more carefully, and actually intended it to be permanent. When DC did this with Barry Allen, there must have been some serious intent there, as the character was gone for two decades before subsequent editorial mandate declare that he be revived. Or if the intent was more short term, perhaps the success of Wally West taking the role of The Flash made DC reconsider. Either way, Barry was truly believed to be dead by readers, and truly intended to stay that way by DC. At least for a time.

Around the same time of Barry Allen’s death, there was a somewhat similar scenario playing out in another medium, but with different results. What scenario was this, you ask? I will tell you. Of all things, it was one of televisions biggest prime time shows of the day, Dallas, when the writers killed off one of its most popular characters, Bobby Ewing, in a season-ending tearjerker. But unlike DC’s success after killing The Flash, Dallas did not achieve much in the way of continued success after whacking Bobby and instead limped along in the ratings the following season. Whether or not this was due to the character’s absence is debatable. Regardless, seeing the slipping ratings, the network wanted something done to perk things back up, and the producers’ solution was to bring back this presumed-dead character, which was done via the now-famous Bobby-in-the-shower scene featuring his return.

So whatever the original intent was for Bobby Ewing’s character, the writers of that show believed that in the world of fiction, death isn’t so insurmountable that it can’t be overcome. And whether or not that episode can or should be credited to popularizing the idea, it certainly went a long way towards cheapening the idea of death in serialized fiction, and a lot of people were watching.

Of course, that episode also popularized another oft-criticized story device: writing off events as a dream sequence. DC themselves had done this numerous times in the past, but at least that was only to legitimize a story that had been created from its inception as “imaginary”; that is, not to impact future storylines. The writers of Dallas were just trying to retroactively undo a bad idea, and although the notion was implausible in the context of the show, at least it provided a threadbare explanation for this seeming resurrection.

But now, an explanation isn’t even necessary, really, because consumers’ expectations have swung back the other way again, back to the default belief that a character isn’t really dead, no matter how many bullet holes, how big the explosion, or how many creatures from the Negative Zone have piled on. And similarly, writers pen their stories with their character alive in the beginning, alive in the end, and whatever happens in between that might include the word “death” is incidental. Ask any creator past or present if a character they knowingly offed is in fact dead, and they’ll all say “yes”.

The only difference is: today, they’d be lying.

So, I’ll give it a year. Johnny Storm will walk it off and be back in FF #12. Which would have been Fantastic Four #600. Hmm; sounds like something else just might be resurrected, too . . .

(thanks to Cee Scott for pointing out the numbering thing regarding Fantastic Four & FF!)