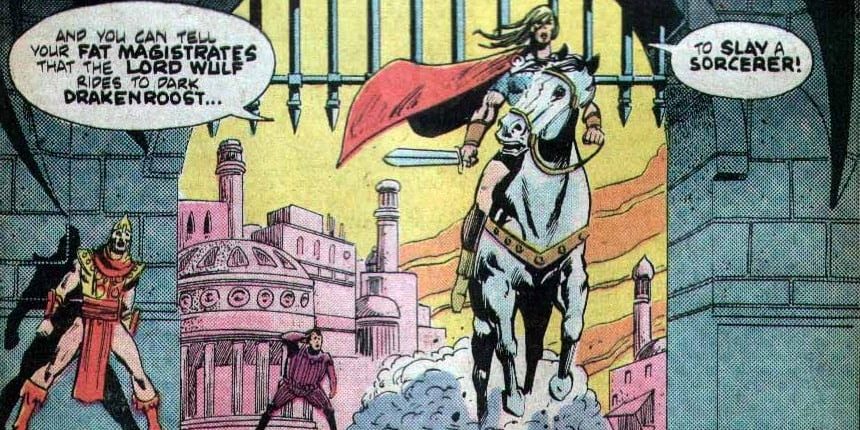 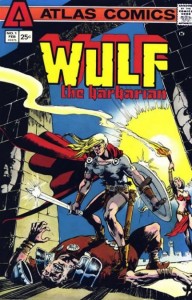 With the return of Atlas Comics heroes to the comic shop this week, in the form of Wulf, I decided to pull out the original series from Atlas Seaboard, so this week’s Retro Review is of Wulf The Barbarian # 1 cover dated February 1975.  The book would have hit the comic book stores / newstands in November 1974 and would have been either the first or second Atlas comic on the stands.   The first issue sports a nice Larry Hama cover showing Wulf standing over a fallen troll, with a torch bearing girl in the near  background, illuminating the scene.   It’s effective and captures the readers eye and invites you into the interior to see what this comic is all about.

The story is apparantly simply entitled, “Wulf The Barbarian” and it is written and pencilled by Larry Hama, with inks provided by Klaus Janson.  The story opens with Wulf walking the strees of Azerebajia, a city on a nameless world, in a forgotten time.  He is in search of Stavro the Juggler.  He finds and helps the crippled juggler home to begin sword practice.  But first he is sent out to secure Stavro’s favorite wine to help dull the aches from old wounds.   While purchasing the wine Wulf sees a golden falcon, which triggers his memories and Hama takes us on a long flashback to Wulf’s childhood.

Where we learn that Wulf was once a prince, son of Lord Wulfgar and his queen, Lady Lenore.  His memories return to a day when the family was far from their castle on Wulf’s first hunt.  The hunting party becomes uneasy due to the their golden hunting falcon’s eratic actions, and with good reason, as their party is ambushed by a troll army sent by the sorcerer, Mordek Mal Moriak.  The King is slain and the hunting party falls back to protect the queen and the young prince.

The trolls overcome the hunting party, but not before Count Stavro Dar Kovin is sent, with the prince in tow, to flee on the last remaining horse.  As Stavro and Wulf barely make their escape, Wulf turns to see his mother struck down by a grinning troll.  Even though they have escaped the reaches of the troll army, they are set upon by Balik, a minion of Moriak, who comes at them astride a dragon!  Stavros manages to kill Balik and destroy his link to Moraik, but they are carried far off on the back of the dragon.

Eventualy the wounded dragon tires and perishes, plunging Stavro & Wulf into a desert halfway across their world.  But this actually works to their advantage, as they are far from Moriak’s clutches!  They find their way to the city of Azerebajia, where Stavros juggles knives for money for their support and Wulf grows to manhood learning swordcraft from Stavros.  The flashback ends with Wulf being rudely brought back to the present with news that three swordsmen are attacking Stavros.

Wulf rushes back, but is to late, Stavros has been killed, but he has taken two of the swordsmen to death with him and has wounded the third.  Wulf gathers his sword and tracks the third killer.  He catches up and discovers that the third swordmen is not a man at all, but the same grinning troll that had slain his mother, ten years hence!  The troll even brags about using Wulf’s father’s own sword to kill the son, but Wulf manages to use the skills and techniques that Stavros has taught him and he overcomes the troll and gets his revenge by killing the troll.  Wulf decides that now it is time for him to return to his own lands, and to dark Drakenroost, to slay a sorcerer!       This ends the first promising story of Wulf The Barbarian.

Say what you will about Atlas Seaboard comics, and what went so horribly wrong, so quickly, but this first issue was quite a good sword and sorcery comic book.  It provided the needed back story, via the flashback, and set the tone, as well as, the direction for the series to follow.  The artwork, while not awesome, was very serviceable, and the story above average for comics.  Therefore, I give it three (3) out of five (5) Legion Flight Rings!

And as for the new Atlas, Wulf, by Steve Niles and Nat Jones, it’s nicely drawn, but doesn’t have a third of the story content that the original first issue by Atlas Seaboard had.  Just thought I’d let you know what I thought of it, as well.  But I’m along for the ride and look forward to modern stories, telling of these heroes, who had way to short a life span, back in the seventies!