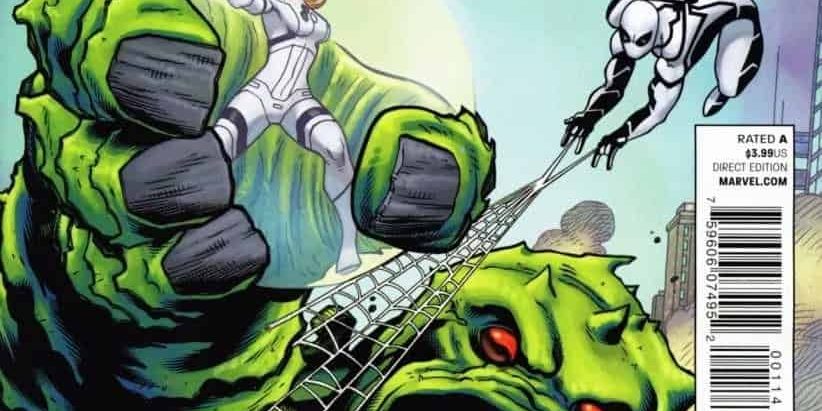 Whenever a member of any team is taken out of play because of illness or injury, the team has to make adjustments to carry on. Van Halen continued without David Lee Roth, although some of us dispute how well that worked out; the Packers had success post-Brett Favre, which no one can dispute anymore; and office managers shuffle around departmental responsibilities and give the rest of us more work, which is probably also in universal agreement. In comics, a bad case of death has sidelined The Human Torch for the time being, so The Fantastic Four have had to take extraordinary steps to move forward.

The extraordinary step in the FF’s case, though, isn’t replacing a departed teammate. They’ve done this a lot of times over the years, rather than go short a member and have to change to a non-alliterative moniker. But this time, they have changed their name, to the Future Foundation for those who don’t know, or at least they will come the release of FF #1 later this month. And because of this, they could have, for the first time in history, carried on with just three members and not stood in conflict with their own name. Or, they could have hired any number of new members, for that matter.

Johnny already had Spidey in mind as his replacement before he took a leave of absence due to a death in the family: his own.

But, despite the freedom from a pre-defined roster size that this new name grants them, it appears that, as usual, a single member will replace the absent Johnny Storm, the identity of whom has already been revealed as none other than one of Johnny’s closest superhero pals, the Amazing Spider-Man. Or perhaps that should be the Prolific Spider-Man, who last time I checked, was being featured in a flagship title that of late has been published on a high-weekly basis, two Avengers titles, a mini-series with Wolverine, the current Carnage mini-series, and a recent appearance in Invincible Iron Man. Not to mention the ongoing Ultimate Spider-Man and Marvel Adventures Spider-Man series, even though many will claim that the latter two don’t feature the “real” Spider-Man. Feh. Don’t even get me started on that.

No wonder Spidey’s always running out of web fluid. He’d have to be cloned to plausibly support all of the activities he’s involved in, but I don’t think that’s a topic that any sane writer is going to tackle again. And not only that, he gets another new costume.

As much as I feel I should condemn the saturation of the character across Marvel’s output, I’m having trouble with the idea. And how can that be, you ask? Well hold on, because I will tell you. If nothing else, I’m pretty thrilled that a premiere character is being chosen as a replacement, rather than a second-stringer like She-Hulk, or a third-stringer like the one-time Ms Marvel who eventually became a female version of The Thing. But with regard to the character’s addition to FF, writer Jonathon Hickman has impressed with a very rich, complex, storyline to the point where I’m more than happy to see how he plays it out, however pandering or commercial it might seem. Ditto with Spidey in The Avengers, where writer Brian Michael Bendis is making the idea of Spidey as one of Earth’s Mightiest Heroes work on two fronts, with Spider-Man as a member of both the traditional team as well as the New Avengers. And Dan Slott’s Big Time arc in Amazing Spider-Man is finally bringing the character out of the regressive Brand New Day era back into the realm of evolution and growth.

Essentially, for the first time, there is enough talent on board to support such a high amount of exposure, along with a diverse array of environments that can allow for storylines that aren’t all derivative of each other. This is not fifteen years ago, when Spider-Man titles, and those of other popular franchises, were churned out during an era of gut-turning quality-over-quantity mindset, and puked out a lot of pretty wretched product. Anyone remember such Spider-Man series such as Funeral For An Octopus? Or The Lost Years? Or The Final Adventure? Yeah, I thought not. 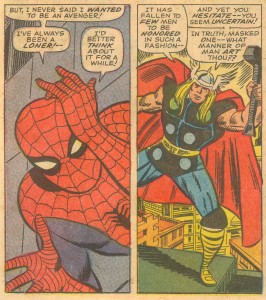 The Avengers made a very backhanded offer for Spidey to join the Avengers, and so offended was he that he took 4 decades to finally sign up. 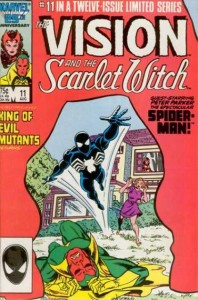 The month this comic was released was the same month Marvel said Spidey would not appear in any of its comics.

It’s hard to believe now that it took almost a decade after Amazing Spider-Man #1 hit the stands for a companion title, Marvel Team-Up, to finally appear. Hard to believe that Spidey’s decision to turn down his first opportunity to join the Avengers, back in 1966’s Amazing Spider-Man Annual #3, made so much sense apparently that he didn’t finally join for another forty years. And hard to believe that, back in August 1986, Marvel for some reason thought it would be a good idea for Spider-Man not to appear in any of his titles for that month in the puzzling Where Is Spider-Man? gimmick where some editorial coordination across the Spider-Man titles ensured that he did not make an appearance. This was something Marvel seemingly did for no other reason than to prove that they could.

Spidey joined the FF before. But it wasn’t “real”.

Which, by the way, they couldn’t; when readers were asked “Where is Spider-Man?”, they just said “There he is!” and pointed to the cover of the completely-unrelated Vision and Scarlet Witch #11, which shipped that same month and featured a Spidey guest appearance that apparently slipped through the editorial dragnet.

Now, readers can point to a lot of different comics on the rack and say “there he is”, which for the moment is most definitely a good thing. Now might be a good time to dig out that first What If? #1, from 1977, which initially posed another question: “What if Spider-Man joined the Fantastic Four?”

Hold on, because it appears we’re about to find out.

Category: Comic BooksBy Jim JohnsonMarch 8, 2011Leave a comment
Tags: I Will Tell You