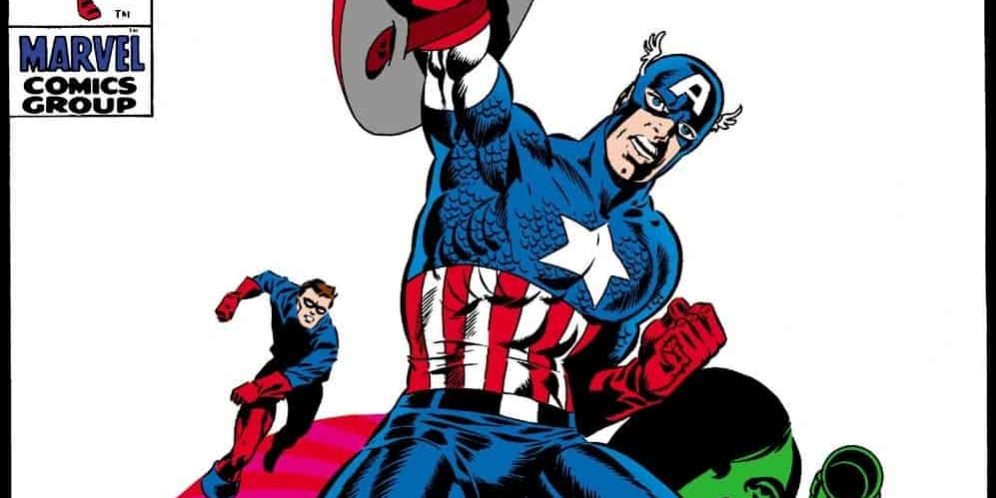 For this week’s Retro Review, I pulled out the three issue run of Captain America that Jim Steranko put together back in 1969.  The issues were # 110, 111 and 113.  Issue # 112 was written by Stan “The Man” Lee drawn by Jack “King” Kirby and was basically a point 1 (.1) issue, though it was billed as an album issue, as it recapped Captain America’s origin and touched on some of his more famous battles and foes, as told by Cap’s fellow Avenger, Iron Man.  If only today’s Marvel Comics did as good a job, as Stan & Jack, in bringing new readers up to speed today!

But let me get off my soapbox and get back to Captain America # 111.  It’s cover dated March 1969 and it picks up from issue # 110, with the hordes of Hydra, led by Madame Hydra, battling Captain America and Rick Jones, in Bucky’s costume, attempting to become Cap’s crime fighting partner.  The cover is a beautifully drawn gem by Jim Steranko, with a rare white background, which really made the book pop off the stands in 1969.  The story is entitled; “Tomorrow You Live, Tonight I Die!” and as I mentioned previously, it’s written and drawn by Jim Steranko, with inks provided by Joe Sinnott, slumming away from his Fantastic Four duties.

The story begins with a silent splash page divided up into thirteen small panels featuring penny arcade scenes, for example, a record your voice booth, a shooting gallery, a gypsy fortune teller machine, etc.  The title of the story is actually printed on a dispensed fortune card that Steve Rogers receives while he is waiting for Nick Fury to meet him.  One thing you need to know is that recently Steve Rogers had revealed to the world that he is Captain America.

Steve is set upon by numerous thugs, as the trap is revealed, and he realizes that it wasn’t Fury at all, that had set up the meet!  Steve changes into his Captain America togs, sans the mask/cowl, though iritating, throughout the book, it’s refered to as his helmet for some reason.  Cap beats off the bad guys, as well as, a couple of mechanical traps.  After which, he returns to Avengers Mansion to begin training Rick to assume the role of Bucky.

The scene shifts to Hydra’s headquarters, and it is revealed that the ambush and traps were set up by out of uniform Hydra agents.  After a couple of pages of Cap showing the ropes to Rick, with each having to deal with their own issues regarding Rick assuming Bucky’s role.  Rick feels Cap is never going to accept him, as he is no where near trained as Bucky was, and Cap having to deal with someone other than Bucky, filling that role and his guilt at Bucky’s death.  It doesn’t go well. 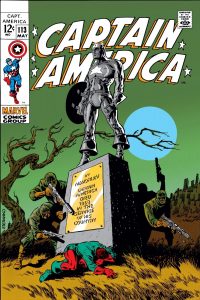 Cap leaves and Bucky remains at the mansion, to feel sorry for himself.  A letter is delivered for Captain America.  Bucky opens the letter and is felled by knockout gas, which leads to a beautiful two page psychedelic  spread where Rick suffers a terrible nightmare.  These two pages are Steranko’s nod to painter Salvador Dali.

Captain America discovers the message, but is too late to stop Rick’s capture.  Cap returns to the penny arcade, and is attacked by the Man-Killer, a HYDRA robot.  Rick manages to escape & he tries to warn Cap, which proves to Cap that he’s got what it takes to assume the role of Bucky!  After seeing that Rick is safe, Cap leaps from a rooftop into the river, straight through a barrage of HYDRA gunfire!  The police dredging the river, find only his bullet riddled costume and cowl, as well as, a mask with the facial features of Steve Rogers.  Thus proving that Steve Rogers wasn’t really Captain America!

Thus ends the issue, on that cliffhanger!  Is this the second death of Captain America?  With his first taking place back in World War II.  Will he manage to escape certain death?  Well, the readers back in 1969, had to wait two whole months and for Captain America # 113, to find out.  Luckily today you can just pick up the back issues or Marvel Masterworks # 64, the third Captain America volume in this wonderful series.  I give it a full five (5) out of five (5) legion Flight Rings!  Definitely you should add this short run to your comic book collection!

Oh yeah, Cap doesn’t really die! It was a ploy for him to regain his secret identity. But I guess you had already figured that out, eh?  Real heroes don’t die, or if they do, they eventually get better!