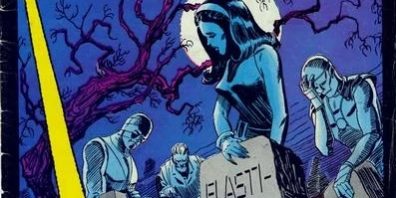 This week, we’re looking at DC Comics’ Doom Patrol # 121, cover dated October 1968.  It features a nice graveyard scene cover by Joe Orlando, showing tombstones of Elasti-Girl, Negative Man and Robotman.  It also asks the question; Is this the beginning of the end of the Doom Patrol?  You Decide!  That just reaches out and grabs you, doesn’t it?

Well, maybe not today, but in 1968 it sure did!  You open the comic and the title of the story is; “The Death of the Doom Patrol?” and it’s written by Arnold Drake and drawn by Bruno Premiani, and edited by Murray Boltinoff.  I mention Murray, as he, along with Bruno, are featured on the splash page, as characters in the story, breaking the fourth wall,addressing each other, as well as, the reader.  They also appear in the last panel of the story.

A quick aside, writer Arnold Drake was suppose to have been featured, not editor Boltinoff, but he had been replaced, because he had just resigned over a pay dispute with DC and had moved to Marvel Comics by the time this issue hit the news stands!  He finished the script only out of friendship for Boltinoff.  The question I have, is the likeness that of writer Drake, or editor Boltinoff?  I kind of lean towards Drake, myself.  Anyone know?

Anyway, the story pits the Doom Patrol against Madame Rouge, the spurned lover of Doctor Niles Calder and Nazi Captain Zahl, another old Doom Patrol enemy.  But before going after the Doom Patrol, they first bomb and kill fellow villains, The Brain and Monsieur Mallah (I guess Drake was trying to prevent anyone from ever using his characters again).  Then their efforts turn toward Rita, Larry, Cliff and the “good” Doctor Calder!

After a couple of failed attacks on them, the Doom Patrol, are forced to isolate themselves on an island, for the public’s protection, only to be put into a position of being trapped there when Madame Rouge’s henchmen blow up their plane.

The Doom Patrol are then told that they either give up their own lives or the villains will blow up the small fishing village of Codville, Maine, consisting of only fourteen people.  In a dramitic turn of events the Doom Patrol choose to sacrifice themselves rather than have fourteen innocents die in their place.  Thus Arnold Drake ends the Silver Age of the Doom Patrol with their deaths in this unpresendented issue!  This marked the first time in comic book history that a cancelled book ended by having it’s cast of main characters die!

One final aside, quite a few similarities exist between the original Doom Patrol and Marvel Comics’ original X-Men.  Both feature ‘misfit’ super-heroes shunned by society and both are led by men of intelligence confined to wheelchairs.  The first comics featuring each if these groups came out within three months of each other, but it’s unlikely that one copied from the other, much like the two companies coming out with the two swamp monsters Swamp Thing and Man-Thing within months of each other a few years later.  Some times a coincendence is just a coincendence!

I give the Doom Patrol # 121 three (3) out of five (5) Legion Flight Rings!  It’s an original ending for a once popular series.  One which happens to be a favorite of mine, even after all these years and the various attempts to revive the group since then.