I Will Tell You #2: Avengers Reassemble! 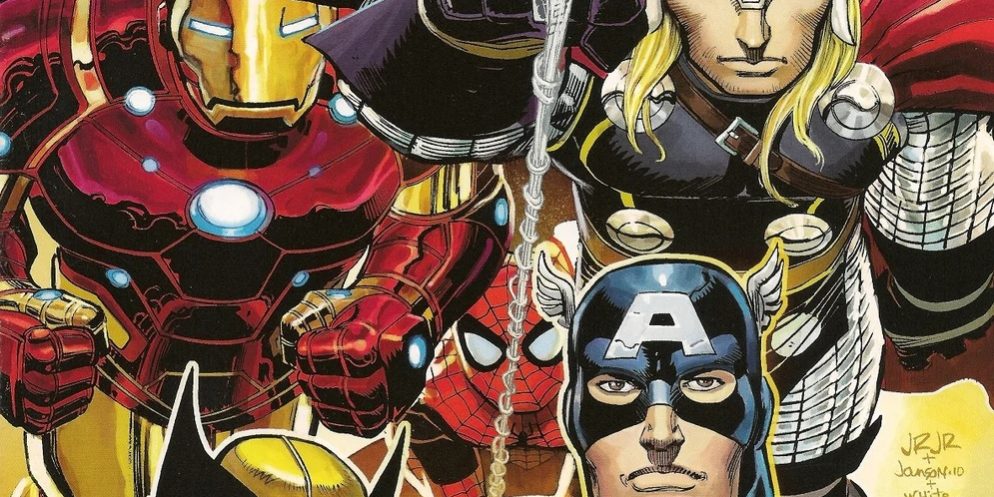 I’ve written about this many times before, but for those who don’t know: it was The Avengers that got me into reading comic books. I dug it for the same reason that many fans did: the group was essentially Marvel’s All-Star team. While members came and went, the nucleus of Thor, Iron Man, and Captain America made it a book that was very cool and a lot of fun to read.

Or, as I discovered, at least some of the time it was. When I discovered The Avengers in the late 70s, the title was in the midst of its stellar Jim Shooter / George Pérez run. In my mind, this has always been the title’s best era, although I suppose the high esteem I hold for it could be influenced by it being my first exposure to the comic. Roy Thomas’ earlier run, which included the Kree-Skrull war, was awesome, too, as was Kurt Busiek and Pérez’ subsequent run on the title a decade or so ago.

One thing I’ve noticed over the years, though, was that my favorite runs on the title were ones that featured The Big Three as the core of the team. And in conjunction with that, some of the eras I hold in lower regard, such as Roger Stern’s tenure during the mid 80s, did not feature that same dynamic, and instead featured line-ups that consisted of characters like the Monica Rambeau Captain Marvel, Starfox, and Tigra.

Because of this, I had incorrectly and unfairly maligned the title during runs like these, equating the team’s character roster to the title’s creative roster. Not that it really mattered, I suppose, because although my opinions of the eras I like or dislike remain unchanged, the true reasons for that have become apparent to me. Writers like Shooter and Thomas have always been excellent team book writers; they are among the masters of character dynamics and chemistry and largely have been able to make The Avengers click during their runs. Stern, while a good writer, never had the same skills with a team book. And it takes special talent to try to make a team book work with second stringers like Tigra. Gerry Conway learned this when he tried to make Justice League of America work with a cast of nobodies around the same time. Justice League Detroit? Ugh. Another black eye to the city. Anyway . . .

Flash forward to several years ago, and along comes the modern day master of all things Avengers, Brian Michael Bendis, who came from out of nowhere, destroyed the team in Avengers Disassembled, and rebuilt it with a bunch of characters who had never even been mentioned in the same breath as the team. And then further fragmented the team after Civil War, bringing on characters who would be flattered to be called second-stringers. And when he first did this, I thought back to those previous runs sans Cap, IM, and Thor and thought, oy. This is not going to be fun.

But, it was fun. Bendis was the writer who made me realize that a good writer can make such a team work. That was the first time in 30+ years of reading the title, albeit off-and-on, that I fully enjoyed it despite the lack of the Big Three at the team’s center. And it was only then that I understood that I had disliked those earlier runs on the title for the wrong reason. It wasn’t because I didn’t like the roster; it was because I didn’t like the way the writer handled the roster. It was as though Bendis’ intent was to take the least likely characters from the Marvel Universe who would be successful in any capacity and stick them in a book called The Avengers, just to prove that he could do it. It was like he made a bet, or something. Well, he certainly won. All of his various Avengers titles have been entertaining.

So now that I’m convinced that The Avengers can be a great book even if it featured Fin Fang Foom, Aunt May, and Lockjaw as the core if helmed by the proper writer, what happens? I will tell you. The book relaunches again, with Bendis writing, and who’s back on the team? Yep, Thor and Iron Man. And Cap, too, even if it’s not Steve Rogers. And while the critic in me approaches this with my usual default but guarded optimism, the fanboy in me is absolutely stoked. For despite my enjoyment of a team consisting of Luke Cage, Spider-Woman, and Doctor Strange, the kid in me relishes the return of Earth’s TRULY Mightiest Heroes.

So thanks for helping me see the light after all these years, Bendis. And now that the lesson has been learned, thank you also for bringing back . . . The Avengers.

BTW, shouldn’t it have just been Avengers Dissembled?

Category: Comic BooksBy Jim JohnsonAugust 20, 2010Leave a comment
Tags: I Will Tell You