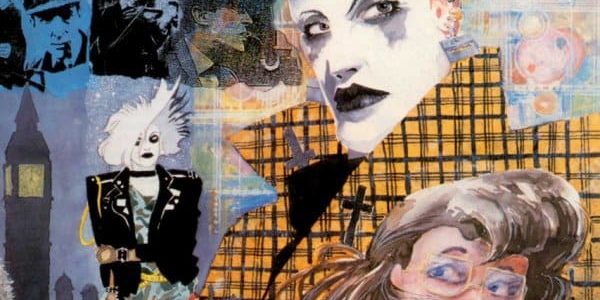 I’m back, after a week off, to attend a family funeral out of state in Kentucky.  I hope you didn’t miss me too much!  This week I’m writing about a more obscure offering, Caliber Comics’s Baker Street # 1, from March 1989.  Caliber Comics was formed by Michigan book store owner, Gary Reed, during the late 1980s.  The comic was created by Gary Reed and artist, Guy Davis.

The premise was similar to the classic Sherlock Holmes and Dr. Watson adventures, only these adventures took place in an alternative, but still present day London.  An England where World War II never happened, and the Victorian era is resurrected with then present day values that clashed with London’s punk sub-culture.

The main characters of the book are introduced in this layered first issue.  We first meet transplanted American medical student Susan Prendergast (the Dr. Watson of this series) as she seaches for an apartment.  She responds to an ad in the school paper and meets Sharon Ford (the Sherlock Holmes character) who is looking for an additional roommate to share and care for the apartment.  In fact, she’s offering free rent to a roommate who will clean and organize the apartment and other things not made clear.

There is a very nice exchange between Susan and Sharon, where Sharon deduces that Susan is a medical student and an American.  Obviously setting up the similarities between Sharon/Susan and Holmes/Watson.

The third inhabitant of the apartment also is introduced, Sam, another female character.  Needless to say, this book is all about the ladies!  Both Sharon and Sam are portrayed as part of the ‘punk’ sub-culture.  Susan, clearly is not.  After a visit by police inspector Pinner, Ford is intruigued by a case that the inspector is working, involving a couple of punk gangs and a theft at the Marlowe Gallery.  Sharon leaves the apartment to investigate.  Later Susan decides to see if she can catch up to her.

But she doesn’t know the club that Sharon has gone to, so she visits the one club she does know of, and finds an advert for the club she hopes to find.  Unfortunately Susan gets lost in the unfamilar London.  She encounters a punk gang who accosts her and Sam comes to her rescue.  Sam fights off two seperate punks and she takes Susan back to the apartment and gives her a punk make-over.  Once Susan looks are changed to fit into the punk underground they visit the club, Baskervilles (yeah, another nod to Sherlock Holmes!).  Only this club hosts dog fights, a nice homage to the Conan Doyle story; “The Hound of the Baskervilles”.  Susan flees to the “ladies room” only to find a body!  A man stabbed with a needle an left in a bathroom stall.

Sam is told by Harlequin, the owner of the club, to take Susan back home.  And once safely back in their apartment, Harlequin appears and is revealed to be Sharon in disguise.  Thus bringing the first issue to a close.

I certainly was as far away from the punk lifestyle as anyone could be, being in my thirties and married for ten years, but something about this book really grabbed my attention.  The story had depth and the art, by Guy Davis, though black and white, spoke to me.  I was hooked after reading this first issue!

Did anyone else pick up this series?  I’d love to hear your thoughts on it, though it was short lived unfortunately.  All in all, I give this comic a rating of three (3) Flight Rings out of five (5).