So the Fantastic Four is finally back in the pages of Marvel Comics comic books, with a new number one issue just released this month.  And about time, I say!  And in honor of that, his RETRO REVIEW takes a look at Fantastic Four # 142, cover dated January 1974.  This issue sports a cover pencilled by Rich Buckler and inked by Joe Sinnott, as you can see below the coiled tail of Darkoth, the Death-Demon, if you look closely. 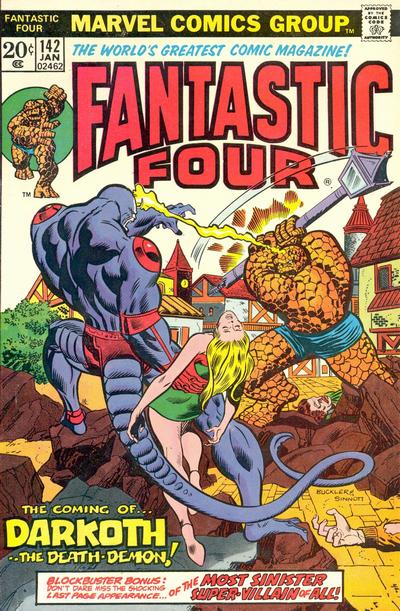 The story within is entitled; “No Friend Beside Him!” and it is written by Gerry Conway.  This issue also features the first regularly pencilled FF by Rick Buckler, who we have already seen provide the pencils on the cover of the issue.  Interior inks are also supplied by Joe Sinnott.

Things pick up immediately after the events in issue # 141, where Reed Richards had used a anti-matter “gizmo” on his own son while within the Negative Zone battling Annihilus, when the Negative Zone baddie had tried to soak up Franklin’s energy.  As this issue opens Ben storms off declaring the “end of the Fantastic Four!”.

Ben goes so far as to fly to the Balkans to get as far away from Reed as he can.  He joins Alicia Masters there, where she tells him a story of some sort of Death-Demon on the loose.  Meanwhile, Reed is is back at the Baxter Building in New York beating himself up for what he as done to Franklin.  Medusa, of the Inhumans, is there, where she has been subbing for the Invisible Woman on the team.  She stops him from hurting himself and drags him out to dinner to take his mind off of the past events.

Back in Europe, Ben is attacked by the Death-Demon while walking the streets alone at night.  We get a great four (4) page battle scene drawn by Buckler doing his best Jack Kirby riff.  Ben is humiliated and comes out second best in the battle.  And Alicia is getting ready for an operation.

Once again we switch scenes, this time to Johnny Storm who is with Wyatt Wingfoot for a quick update then the scene moves to Sue Richards, who is driving with their son, Franklin.  She tells him everything will be all right and that no one will ever hurt him again!  Parents across the world have been telling their children exactly that, but really have no way to ensure it won’t happen again.

As the Thing waits on Alicia’s operation, he no longer can sit still and barges into the operating room, but the doctors and Alicia are no where to be found!  And then he is once again attacked by the Death-Demon. We get another four page battle and the Thing comes out on top this time but is greatly fatigued.  He stumbles back into the hospital and Alicia rushes to his side and a hidden figure says from the shadows that she has made “a most excellent bait”.

On the second to the last page, the reader finds themselves back in New York, where Medusa and Reed have entered a townhouse leased to State University, Reed’s alma-matter and find themselves standing before a dinner table with their host reveals to be Doctor Doom!  And the issue ends right there.  It will eventually take both issue number 143 and 144 to wrap up this storyline pitting the FF against Doom.

This issue though was a great introduction to new regular penciller Buckler, ablely inked by pro, Sinnott.  With Buckler doing his best Kirby imitation, it really felt like one of the old great Fantastic Four adventures!  Don’t overlook this period of the Fantastic Four’s history if you decide to delve back into the past.  You can’t go wrong with those Lee and Kirby gems in the first 102 issues, where the Marvel Universe had it’s beginnings, but there was a lot of great stories and art to follow in the seventies.

Enjoy the fleeting summer, folks and be sure to return next week for a new Fabulous Find and again in two weeks for a new RETRO REVIEW.  Be seeing  you …