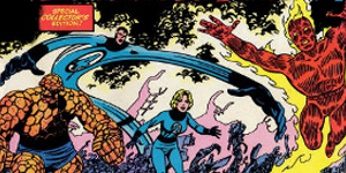 Hello out there, where ever you might be in this wide and wondrous world!  It is once again time for a new RETRO REVIEW!  And this week it’s time to dig into the Marvel Comics Universe, so after a little bit of thought, I’ve decided on Fantastic Four # 252, cover dated March 1983.  It’s got a cool “turned sideways” cover by John Byrne that makes it almost like a poster.  Take a look: 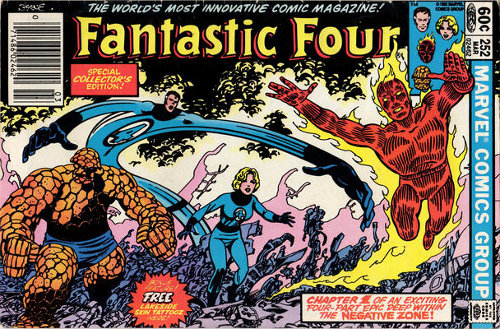 As you can see by the cover, this issue is touted as a special collector’s edition!  And why is that?  Well, because not only is the cover turned sideways, but the interior art is also presented along the horizontal, rather than the normal, vertical, axis!  Some people I know dislike this experiment, but personally, I think it really works!  Yes, you need to hold the comic lengthwise, rather than upright, but I think it adds a cinematic feeling to the read!

The story is entitled; “Cityscape”, and it is written, pencilled and inked by John Byrne!  The editor-in-chief at the time was Jim Shooter, and it was he that would have had to approve Byrne’s plan to draw and print the book in this format!  So kudos to Jim and John for trying something different!

The book opens on a far distant planet, in fact one that was not of our own universe, but inside the Negative Zone! The first four pages focus on a group of primitive lifeforms, or people, living outside a huge cityscape.  We are introduced to a female inhabitant, named Taiya and a male, named Tanner.

They and their tribe witness the arrival of a “falling star”!  They all go to where it has struck and instead find the Fantastic Four!  The four are on another of their exploration trip into the Negative Zone and have landed here to record all of the pertinent data of this world.  The tribe attacks and Reed is struck by a paralyzing, poisonous dart and it’s up to Sue, Johnny and Ben to defeat their attackers and protect Reed.  A one-sided battle begins, but before too much damage is done, an old woman, Mama Shonti, leader of the tribe arrives and puts a halt to the fight.

She tells of a prophecy, of four who fell from the stars, who will “come in kindness, but act in ignorance”!  She explains that the poison will do no long lasting damage to Reed and that it will wear off in a few hours.  She tells Sue and the others of her people and how they once lived within the city of Ootah in a “perfect life”.  How their scientists once created a city run by a giant “living” brain.  But one day came where all the people started to experience fear of the city and chose to flee the city and begin living outside the walls.

In the ensuing generations the people have slipped further and further into savagery, even offering up sacrifices to the city.  In fact, Taiya is set to be the next sacrifice.  She is prepared and forced at spearpoint to approach an open door to the city.  Johnny and Ben, of course, react to a damsel in distress and rush to save her from being zapped by a ray of destruction issued from within the city!

Meanwhile back on Earth, Annihilus stalks the Baxter Building!  I guess it’s only fair, if the Fantastic Four have invaded the Negative Zone that Annihilus has invaded the “Positive Zone”!  Yeah, I know our world has never been called that, but it does make sense, doesn’t it?  He quickly captures Franklin Richards and his babysitter, Alicia Masters, but that’s all we get this issue!

Back in the Negative Zone, the Thing rips up a large rock, and tosses it in place of Taiya, towards the doorway.  The ray lashes out and destroys the rock, in place of the girl!  Causing the people to realize that their sacrifices have been in vain in all the years that they have offered up “brides to Ootah”!

Johnny and Ben attack the city and with Sue joining in fight, they reach the “brain” of the city!  Meanwhile Reed has managed to overcome the paralyzing effects of the poisonous dart.  It seems that his mind has been working the whole time he’s been paralyzed and he “knows” what’s taking place with Ootah.  He rushes to his teammates, but he’s too late!

Sue, Johnny and Ben have destroyed the brain and the people are running through the city destroying everything else!  Reed arrives and explains that the city was not just walls, but a living thing that has been growing with a rudimentary desire for self-preservation!  It was truly alive and had driven out the inhabitants from within itself as it sensed they were germs within it’s body!

And now, the prophesy had come true, the Fantastic Four had come in kindness and wanted to help, but acted in ignorance and caused the death of Ootah!  The comic ends with Reed saying; “we have learned the first lesson of the Negative Zone.  Nothing … Nothing can be taken as what it appears to be!”  Not the happiest moment within a Fantastic Four comic, but words to live by!

And the comic also had a bonus feature!  It contained a free Lakeside Skin Tattooz!  Wow!  What more could you want from a comic billed on the cover as being “The World’s Most Innovative Comic Magazine!”

Thanks for checking out this week’s RETRO REVIEW and come back next Friday for a new Fabulous Find!  Till then enjoy life and don’t assume anything!  Be seeing you …