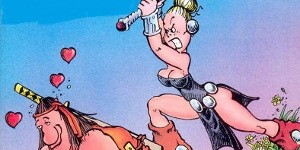 Talk of a new Conan the Barbarian movie got me to thinking about barbarian heroes, which eventually led me to Groo!  So this week I’ve pulled out Groo The Wanderer # 7, which is cover dated February 1984, and was published by Pacific Comics!  It’s got everything that you could want from a barbarian story; a hero, swords a plenty, a mission, friends, friends turned enemies, and even a female barbarian!

The cover as, as always, with a Groo comic, is drawn, both pencils and inks, by his creator, Sergio Aragones!  And what does this issue’s cover look like?  Glad you asked, take a look: 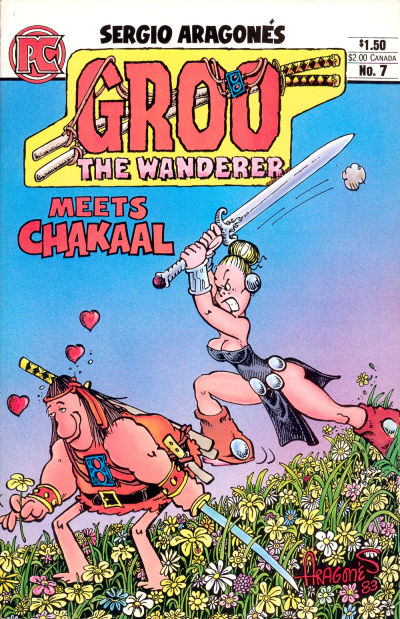 And as you can see by the cover, Groo meets the female barbarian, Chakaal, this issue.  The story is entitled simply; “Chakaal” and it is scripted, pencilled and inked by the aforementioned, Sergio Aragones, with co-plot and dialogue provided by Mark Evanier.

The book opens with Groo wandering around looking for work as a “free-lance barbarian”.  He meets some fellow travelers, and asks where the nearest town is that might need to hire a barbarian for protection.  They point him to Kor-Kis, but by the time he arrives, it is too late, the town has been sacked, looted and yes, even pillaged!

Groo follows the trail of bodies away from the village, and through the woods.  He eventually decides to camp for the night and hopes to catch up with the band of bandits, and even get ahead of them on the morrow, so that he can reach their next targeted village before they get there.

As he prepares to sleep, he is set upon by his old friend Taranto (who first appeared in Groo the Wanderer # 1 & 2). Groo thinks that their might be a reason why he is mad at Taranto, but can’t seem to remember why!  Taranto convinces Groo that there is absolutely no reason for Groo to be mad and asks him to join his band.

Groo explains his plan to offer his services to the next village to protect them from the band of bandits.  Taranto offers himself and his men to join Groo and fight alongside him.  The next day they arrive at the village and Taranto send Groo up into the hills to look for the bandits.   While Groo is away, Taranto and his men sack, loot and pillage the village Groo has hired on to protect!

Groo rushes back but is again to late.  The remaining villagers attack Groo, saying he is the leader of the bandits, but Groo is able to run away and escape!  Finally Groo remembers that he is mad at Taranto, because he had tried to kill Groo!  Now Taranto had set up Groo once again to be killed.

Groo makes he way to yet another town, where he tries to find work as a hired swordsmen, but can only find work as a “serving wench”!  While handling his duties he manages to kill a number of customers, trying to find out who the mysterious Chakaal is that they are talking about, and where the planned battle is to take place.  He only succeeds in getting fired, so he goes in search of Chakaal.

He eventually crosses path with a female barbarian, who he discovers is Chakaal.  She finds out he is responsible for killing a number of her men and swears to kill Groo!  They battle and Groo is ultimately overcome!  He volunteers to help Chakaal fight the bandits in place of the men he has killed.  She agrees to postpone killing Groo until they have vanquished the bandits.

Chakaal comes up with a battle plan and she and Groo lead the townspeople in building a fence around the town with just two openings.  She’ll guard one and Groo will guard the other.  Of course, Groo falls in love with Chakaal and is convinced that she is in love with him.  Instead of watching his gate, he wanders off and picks some wildflowers for Chakaal.  While he is doing this, Taranto and his men quickly and quietly enter the city and begin sacking it.  Chakaal is left to fight them all off, until Groo returns and joins the fray.  Together, Groo and Chakaal defeat all the bandits, though Taranto manages to don a disguise and attempts to sneak away!

Chakaal searches the town for him and Groo searches the surrounding area.  Chakaal uncovers Taranto and turns him over to the townspeople to hold a trial and then execute Taranto.  They pay her the reward money and she leaves.  Eventually Groo returns to the town only to find Chakaal gone and the story ends with Groo running from the town in search of Chakaal.

If you’re familiar with Robert E. Howard‘s Conan the Barbarian, or the Marvel Comics adaptation of said stories, written by Roy Thomas, Groo would be Conan and Chakaal would be Red Sonja!  But all in all, this issue of Groo is fun and worth searching out.  There is only a passing mention of Cheese dip, but that’s the only thing missing from this classic story by Aragones!

See you all next week for another Fabulous Find, same Bat Time, same Bat channel.  Be seeing you …