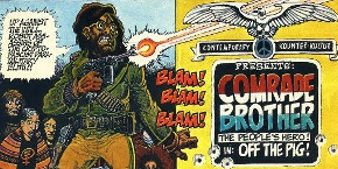 Hello and welcome to a new Fabulous Find!  This week it’s a little off the beaten track, but I think it’s pretty cool comic related collectible.  Hope you do to!  What I’ve pulled out of my collection is the March 1972 issue of Esquire Magazine. This magazine was published by Esquire , Inc. out of Chicago, Illinois.

Based on the cover, you’d never expect anything comic book related, as the cover features multiple slide images of Jackie Kennedy Onassis taken by photographer, Ron Galella.  Here it is: 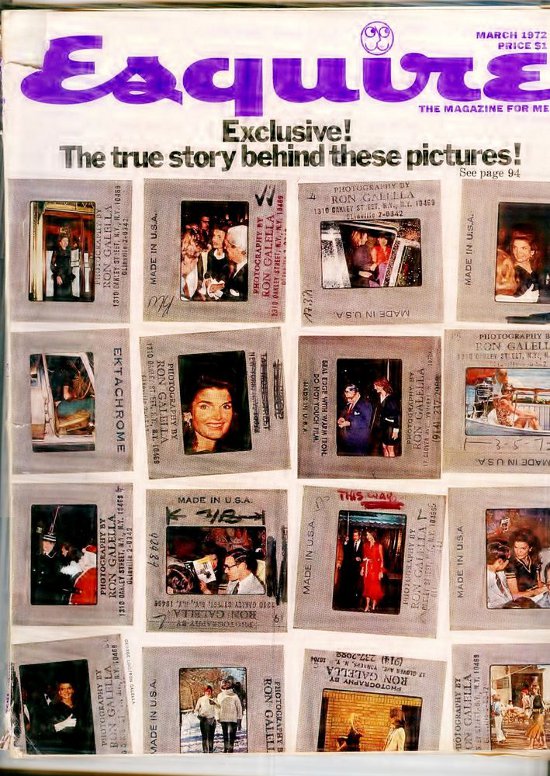 But there is definitely something worthwhile to comic book collectors to be found within!  So what is it?  Well, per the Table of Contents, there is an article entitled; “In the Absence of a Hero for the Seventies” to be found on page 87! Turning to that page we find said one page article.  It’s really just a paragraph, but it explains that on the following six pages the reader will find heroes to fill the gap “that our politicians, our novelists, well, all of us, have left in our society” Esquire asked six artists of the new generation to create a new generation of heroes, a new SUperman for the Seventies!

They asked and the following six artists answered; Bernie Wrightson, Jeff Jones, Mike Ploog, Barry Smith, Ralph Reese and Alan Weiss!  Take a look at what these gentlemen artists came up with, first up is Bernie Wrightson with Red-Neck! 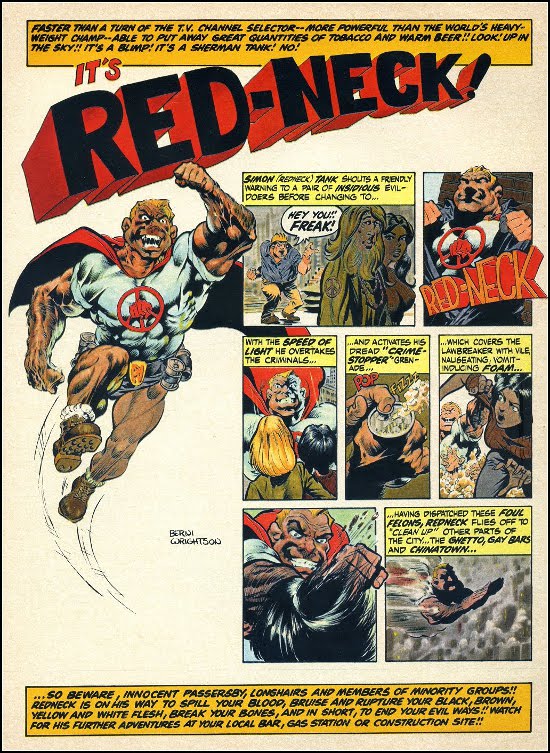 Red-Neck is faster than a turn of the T.V. channel selector, more powerful than the world’s heavy-weight champion, able to put away great quantities of tobacco and warm beer!  So beware longhairs and members of minority groups!

Next up is Jeff Jones and his new hero; Super Human!  A mental and spiritual hero.  His one page story even has a twist ending; 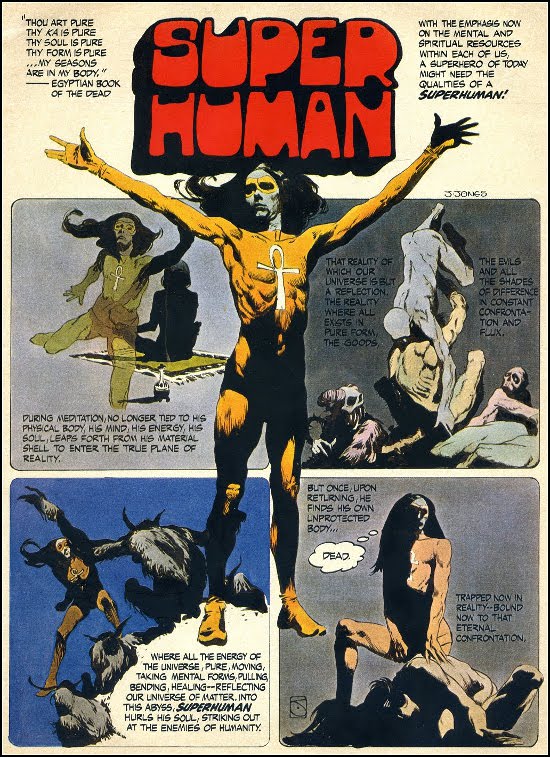 The third strip is The Raider by Mike Ploog.  You’ll definitely know the art style he’s borrowed for his new hero.  Take a look: 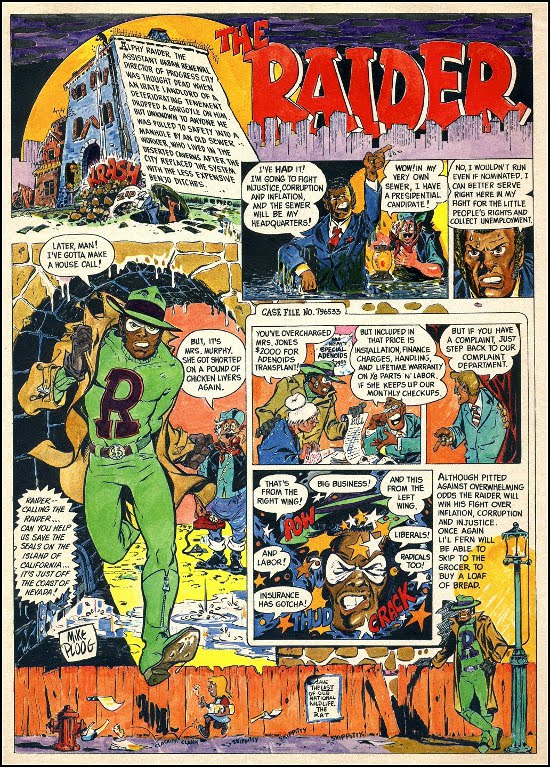 The Raider by Mike Ploog

If you didn’t already know from looking at the strip, Mike created his hero as an homage to Will Eisner‘s Spirit, or is it more of a parody?  You be the judge!

The next strip is the true reason I bought this magazine, as many of you know my favorite comic book artist is none other than Barry Windsor Smith, well here he’s still simply Barry Smith and he shares his creation; Soldier Hero! 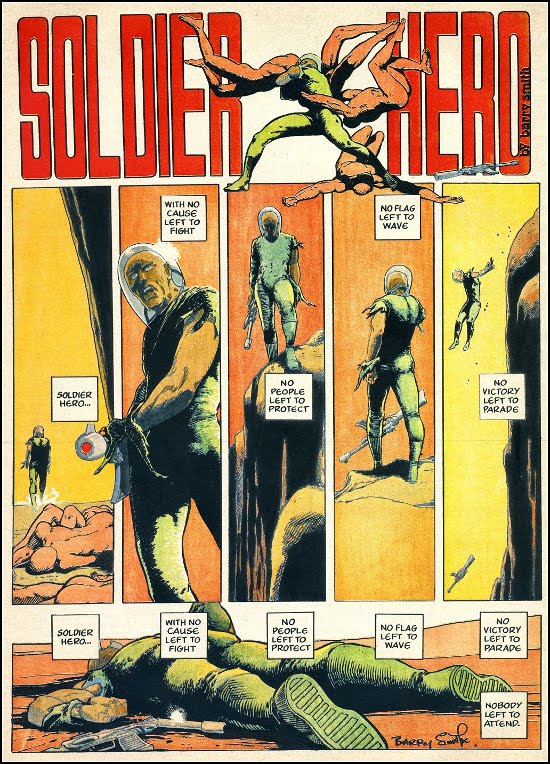 One new page of art by your favorite artist may not be enough of a reason to buy a book for you, but it was for me!

Next up, from Ralph Reese is Comrade Brother, the People’s Hero! 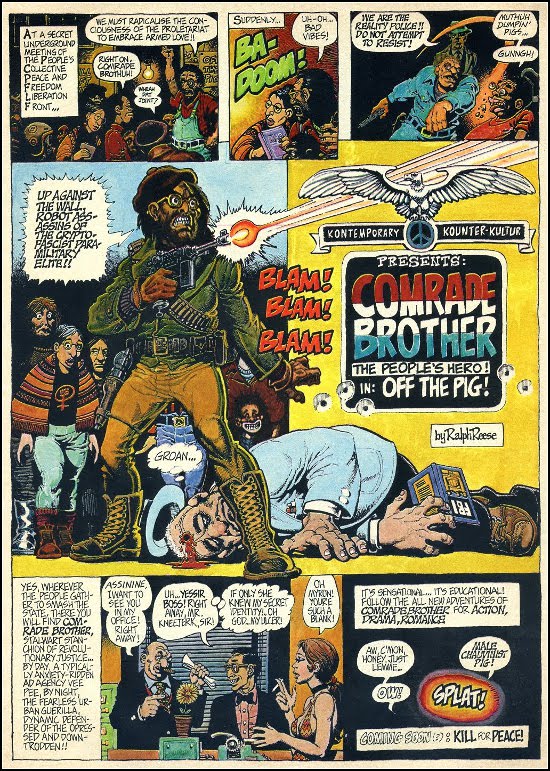 It’s drawn in an underground style and the character reminds me a little of Spain Rodriguez‘s Trashman!  I could easily see this as an actual underground comix.  Too bad that never happened!  In fact, these six heroes have never appeared any where else, at least to my knowledge.

And finally, the final strip/one pager is The Incredible Phizgink! by Alan Weiss.  He’s Inane, he’s mundane and he’s insane!  And here he is: 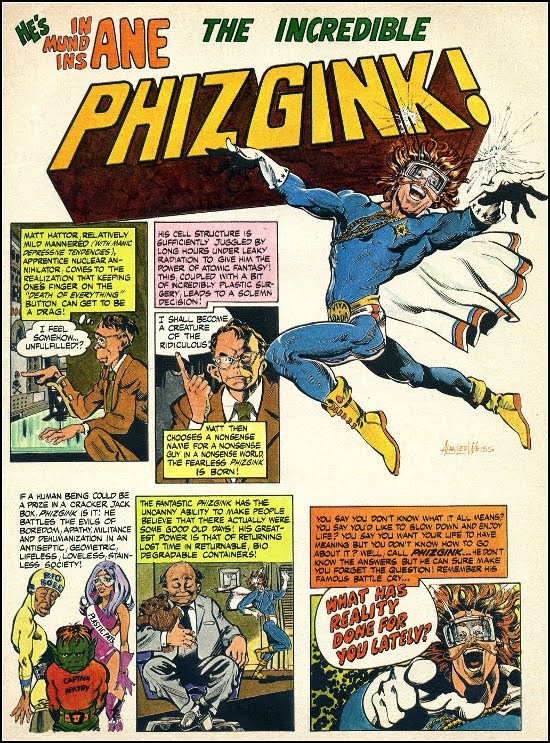 The Incredible Phizgink by Alan Weiss

What can I say, but repeat the Incredible Phizgink himself, “What has reality done for you lately?”

So was it worth the dollar it cost in 1972?  I think so, but you’ll have to decide for yourself.  But good luck finding a copy now-a-days for only a buck!  I think you can find a copy on eBay every once in a while.  In fact, I just checked and there is one available right now for $15.00, with free shipping, so here’s your chance to add it to your own collection!

And heck, you can also find out why Jackie Onassis won’t leave Ron Galella alone!  That’s it for this week, be sure to come back next week for a new RETRO REVIEW!  … be seeing you …