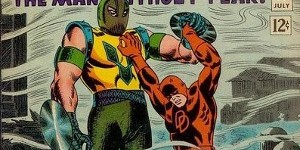 Greetings and salutations!  And welcome back for a new RETRO REVIEW!  It’s time to dig into the Marvel Comics section of my vast comic book library, and this week I’ve pulled out Daredevil # 18.  It’s cover dated; July 1966, and it features a nice John Romita Sr. cover!  Romita had just recently joined the Marvel staff and Stan Lee had been trying him out here on Daredevil to see if he could draw super-heroes, as previously he had been strictly drawing romance comics for Marvel’s rival; D C Comics. Here’s the cover: 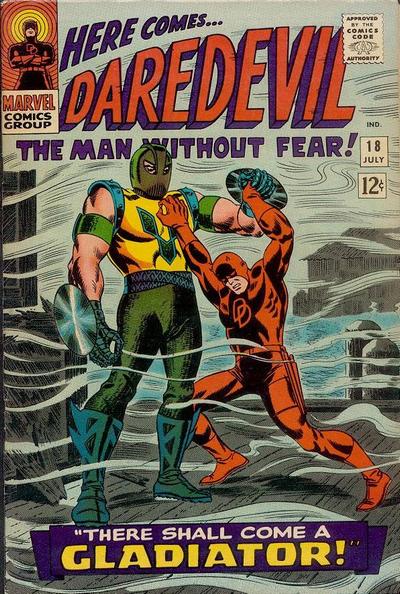 The story is, as stated on the cover; “There Shall Come A Gladiator!”  It was/is written, or at least plotted, by Stan Lee, scripted by Denny O’Neil and pencilled by John Romita, with inks provided by Frank Giacoia.  According to the splash page, Stan only had “time to write the first seven pages before heading south for his first vacation in years!” and “Dandy” Denny O’Neil scripted the balance of the story.  And what a story it is!

The story opens with Matt (Daredevil) Murdock’s partner, Foggy Nelson, in a “seedy, run-down” costume shop.  He intends to buy a Daredevil costume, so that he can convince their secretary, Karen Page, that he is Daredevil!  Ahh, the tangled web we humans weave!  The costumes in the shop just happen to be all Super-Heroes and they are displayed on life-like mannequins, which gives Romita a chance to draw such Marvel characters as; Captain America, Doctor Strange, Thor and even Doctor Doom, as well as Daredevil!  Stan was really giving Romita a chance to show what he could do on other Marvel characters!

Anyway, the costume shop is owned and run by a man named; Melvin Potter.  And why is this important, you ask?  Well it just so happens that ol’ Melvin just happens to think all super-heroes are vastly overrated and is working on a costume of his own to prove his point.  When Foggy walks in.  He tells Potter that he wants a Daredevil costume to wear to a costume party.  Potter tells Foggy he doesn’t have one in his size, but agrees to make the necessary alterations for Nelson and that he can pick up the costume that evening after dark.  Potter also agrees to provide a “supervillain” that will spar with Foggy’s Daredevil thus allowing him to impress on Karen Page that he is Daredevil!

Meanwhile, Matt has been keeping tabs on Foggy and thinks that Foggy is likely to only bring trouble onto himself, not to mention Karen, if he continues with this masquerade!   Matt tries to relieve some of the tension he is feeling, by working out for a couple of hours and then returns to their law offices that afternoon.  He overhears Foggy asking Karen out and decides he better shadow their date this evening to keep Foggy and Karen out of trouble.

After work and nightfall, Foggy returns to the costume shop to pick up his costume and witnesses Potter working on another costume, but doesn’t think anything about it.  He leaves and readies himself for his date, but putting on the Daredevil costume on under his suit.  He picks up Karen and says he needs to see a client for a minute before they go to the restaurant.  He has the cab take him and Karen to the waterfront, where a fog begins to roll in.  Matt follows the two as the real Daredevil, catching a ride on a news helicopter and then riding on the top of their taxi.

Rather than a hired actor in a villain suit, Potter, himself, reveals himself, in his new Gladiator costume, after a two page interlude showing him putting the final touches on his costume and explaining what it can do, etc.  Hey, it is the very first appearance of the Gladiator, so it’s only fair to give him his origin moment!

But, of course he’s wrong, Daredevil has been “playing possum”, and since fighting the Sub-Mariner in Daredevil # 7, he has been working on his ability to hold his breath underwater.  After another two page battle, Matt defeats the Gladiator, but leaves when the two policemen arrive on the scene.  At which time Foggy, who has recovered, stumbles out and the policemen mistake him for the real Daredevil.  There is a great line where one policeman thinks; “I never thought Daredevil would be so flabby!”

And on that note the issue ends, but needless to say, this won’t be the last time Marvel readers will see the Gladiator battle Daredevil.  Potter has no super-powers, but he’s got a classic costume that gives him abilities, similar to Tony Stark’s Iron Man!

Anyway, Daredevil # 18 is an excellent issue and well worth seeking it out.  That’s all for now, but be sure to come back next week for another Fabulous Find and again in two weeks for another new RETRO REVIEW!