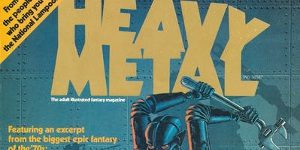 Welcome back for a new RETRO REVIEW.  This week I’ve gone to the bookshelf of comic magazines, off to the side of the comics vault, and pulled out Heavy Metal # 1, cover dated April 1977.  This new magazine was published by HM Communications, Inc. and ran one hundred (100) pages and was sold for $1.50 back in 1977.  The first issue sports a couple of battling robots, as painted by Jean-Michel Nicollet. 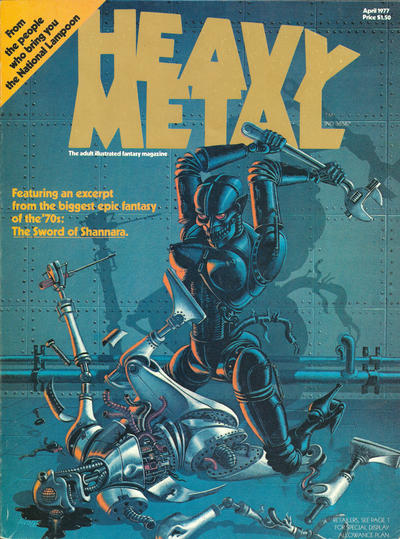 HM Communications, Inc. was created by the company that published the National Lampoon, here in the U.S. They had received copies of the French magazine entitled; Metal Hurlant (which means screaming metal in French) and decided that the American comic buying population needed a similar product.  Thus was born Heavy Metal.

This first issue sports mostly reprinted work from the first five (5) or seven (7) issues of Metal Hurlant, plus one new feature and a four (4) page preview of an upcoming novel, about to be published, but more on that later.

The first strip in this inaugural issue was; Den, written and drawn by American Richard Corben. It ran eight (8) pages and was part one of this storyline.  This was part one of a twelve part story.  A pretty good beginning!

Next up, was a three (3) page story about an astronaut, entitled; Rut.  Think about it and you just might be able to come up with what this stories about.  It was written and drawn by Philippe Druillet.

The third strip was Conquering Armies, and it ran twelve (12) pages.  The title pretty much explains the premise for this story written by Jean-Pierre Dionnet and drawn by Jean-Claude Gal.  This was a recurring series within Heavy Metal and ran in various future issues, all featuring armies in a Twilight Zone type of storyline.

Then came an eight (8) page story written by Dominique Vallet and again drawn by Philippe Druillet. It’s title is; The Adventures of Yrris.  It was part one (1) of a teo (2) part story.  It features a thief as the lead character.

Next, was an eight (8) page Arzach story, simply entitled; Arzach.  It was both written and drawn by Jean Giraud, also known as Moebius.  A nice, twist ending story!  The Arzach stories ran through the July 1978 issue of Heavy Metal.  All of them a self-contained.

Which brings us to a story entitled; Selenia, a ten (10) page science fiction story written by someone going by the single name, Marre, and it was drawn by Sergio Macedo.

Following this is the four (4) page excerpt from the novel The Sword Of Shannara, written by Terry Brooks and illustrated by the brothers, Greg and Tim Hildebrandt.  I remember reading this book back in the late seventies and if I remember correctly, it was pretty good and the illustrations by the Hildebrandt brothers were excellent.

Page fifty-nine (59) begins another ten (10) page strip entitled; Traumwach.  It was written by Pauline Pierson and drawn by Philippe Mouchel, and was a one and done story, I believe.  It featured angels, if you’d care to know!

Moving continually forward, we come to the original story, entitled; Age Of Age.  It was written by Akbar Del Piombo and the art was provided by Norman Rubington.  But the interesting thing was that the art was actually collages!  This made for quite an interesting effect.   Following this was the second 1996 one page strip by Montellier.

Which brings us to the penultimate strip; Sunspot, written and drawn by American artist, Vaughn Bode.  It ran eight (8) pages in full color!  I probably was remiss in not mentioning the other strips that ran in full color, as well.  They were Den, Arzach, the Sword of Shannara preview and Space Punks.  Everything else was printed in lovely black and white!

And finally, the last strip in the new magazine was; Manipulation, written and drawn by Patrice Roy.  It ran four (4) pages total.  And besides a full color back cover drawn by Philippe Druillet, that wrapped the very first issue of the American version of France’s Metal Hurlant, Heavy Metal.

I continued to buy the magazine throughout the first couple of years. but eventually only picked up specific issues, when there was an artist, appearing that I was interested in.

Anyone out there that collected Heavy Metal?  Leave me a comment if you did, with your thoughts on the magazine.  That’s it for this RETRO REVIEW, but please come back next week for a new Fabulous Find.  And of course, I’ll be back in two weeks with yet another new RETRO REVIEW.

Till then, welcome to Autumn!  see ya next week…