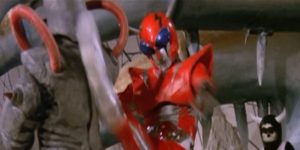 Inframan himself, who could be slipped into a crowd of Kamen Riders without raising eyebrows.

Welcome to Tokusatsu Gesundheit, where today we’re taking a trip across the Yellow Sea from our usual fare to watch the Chinese Kung-Fu Tokusatsu, Super Inframan!

Demon Princess Elzebub frees herself and her monster army from the core of the Earth after millions of years spent dormant. She delivers humanity an ultimatum – become my slaves or be destroyed. Professor Liu Ying-de, leader of the heroic Science Headquarters, turns his top agent, Lei Ma, into the fighting cyborg Inframan to beat back the invaders! 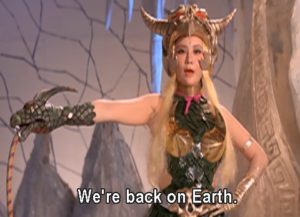 Princess Elzebub, AKA Princess Demon Mom, a Monster I’d Like to Fight.

In 1975, seeing the success that Japanese Tokusatsu shows like Kamen Rider and Ultraman were having in Hong Kong, the Shaw Brothers Studio (makers of Tarantino-influencing films such as The 36th Chamber of Shaolin, The Five Deadly Venoms, and The Executioners from Shaolin) decided they needed to get in on the superhero game. They hired a sci-fi writer (most of their material being period Kung Fu flicks) to craft the story and the Japanese Ekisu Productions (of Kamen Rider V3 fame) to produce the costumes and they were off to the races.

The movie is fairly cheesy, but in a way that perfectly syncs up with its contemporaries in the genre. It’s silly fun geared toward a younger audience, a pleasant way to waste an afternoon. I mostly agree with Roger Ebert’s three out of four star review, despite the name of the column I previously wrote about this film in. 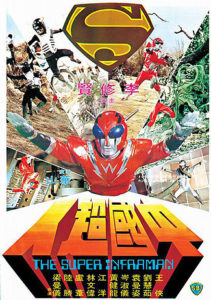 It would be so cool if this got referenced in New Super-Man.