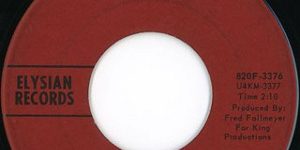 Welcome back to a new Fabulous Find.  Hope I didn’t throw you off by posting RETRO REVIEWS two weeks in a row!  This week I have not visited the comic vault though, I’ve gone into my record collection again and excavated a single, or if you prefer a 45.  You know, one of those small, 7 inch records, with the big hole in the middle.  And that 45 is … Spider Man by the Human Beingz, or as they became better known as, the Human Beinz.

The record in question, Spider Man, is actually the b-side of Hey Joe.  Hey Joe was released as the a-side, as that was the song most people, at the time,  were already familiar with and the band thought had the best chance of becoming a hit.  Hey Joe was one of the most recorded songs of the 60s!  Any garage band at the time had it in their repertoire, but it was the band, The Leaves, that had the hit with the song bringing it to 33 on the Billboard charts in June of 1966.  I can’t tell you how many different 45s I own with sixties groups recording this song!

But back to this record.  Here is a picture of the label featuring the song, Spider-Man: 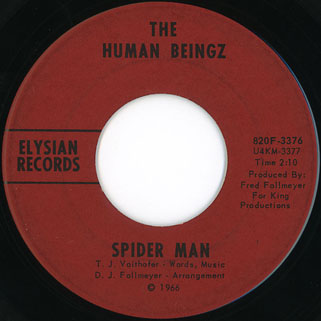 As you can see from the label above the record was released on Elysian Records with the number 3376 assigned to the release.  The song is copyrighted 1966, but the 45 was released in March 1967.  And as I said above, it was the b-side of Hey Joe.

Spider Man, the song, is a kind of folk rock, jangly Brydsy number.  Please follow this link to You Tube to hear the song:  https://www.youtube.com/watch?v=KP78wRHXhAk

The band came from Youngstown, Ohio and they started out in 1964, calling themselves the Premiers, but decided that their name needed to be changed to fit the times, and in 1966 became the Human Beingz.  They were using this band name when this 45 was released.  Actually they did not change their name again, but when they released their follow-up single in September 1967, they had switched labels to Capitol Records, and Capitol misspelled their name on that release as the Human Beinz.

The band was unhappy, but it was decided that is this new record was a hit, they would keep the new spelling, but if the song wasn’t a hit, then Capitol would correct the spelling on subsequent releases.  So what was this recorded that was released in September?  Well, it was a little gem entitled; Nobody But Me, which went all the way to number 8 on the Billboard charts, though it took until February 1968 to reach that height!  So the new spelling stuck from then on!

And because I can, here is a link the the You Tube Nobody But Me hit, as well:  https://www.youtube.com/watch?v=JvwzPADqtxU

As far as I can determine, at the time of the recording of both these songs the bands’ line-up was as follows:

Though, I believe that the groups original drummer was Gary Coates, but I think he had left the band by the time these songs were recorded.

The band managed to stay together until March 1969, when they disbanded.  Though I understand at least one of the original members restarted the group in the late nineties and they may still be playing.

I just noticed that the links didn’t seem to work, so you’ll need to copy and paste them into your browser to hear the two songs. Sorry about that!  But that wraps up this week’s Fabulous Find.  Please come back next week for another new RETRO REVIEW and be back in two weeks for a new Fabulous Find.  Till then, be seeing you …