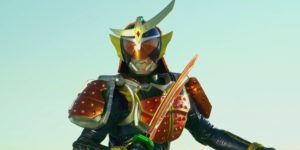 In this corner, the Showa Riders!

Kamen Rider Gaim (the Rider whose show was airing at the time) rescues a mysterious little boy named Shu from an underground city and gets drawn into a three way war between the original Showa-era Kamen Riders, Gaim’s fellow Heisi-era Kamen Riders, and the evil Underground Empire Badan.

In this corner, the Heisei Riders!

The original Kamen Rider TV series was created by Shotaro Ishinomori (whose name will come up a lot here, as he was pretty prolific) in 1971. It produced thirteen distinct television series and specials, each starring at least one hero bearing the name “Kamen Rider” and all with some involvement by Ishinomori, between then and 1993. The fifteen Riders from this era are collectively known as the Showa Riders, as the majority of them were created during the Showa era of Japanese history (Emperor Hirohito’s reign).

In 2000, two years after Ishinomori’s death, the series was revived with Kamen Rider Kuuga. The series continues today, currently on its seventeenth entry (Kamen Rider Ghost). The number of Riders actually portrayed in a given season is anywhere from two to fifteen, but only the eponymous Rider of each series counts toward the “official” listing. As such, as of this film, there were fifteen Heisei Riders (named for the current era of Japanese history). 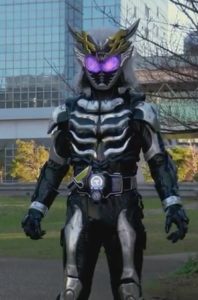 And in this corner, Kamen Rider Fifteen and Underground Empire Badan!

This movie is a fun ride, though one that will undoubtedly be more fun if you have an existing connection to the series. Like most super hero Tokusatsu, it’s a kids film and it shows – the dialogue is at time grandiose and a little cheesy, the action is more flashy than anything else, there’s a gratuitous appearance by the current Super Sentai team, etc. – but the Japanese give their kids a bit more credit than Americans do. The film is solid fun for all ages, and not a bad place to start dipping your toe into the Kamen Rider Franchise. 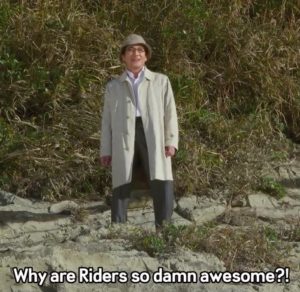 Narutaki speaks for all of us.

NEXT WEEK: We look at the history of Super Sentai while watching J.A.K.Q. Dengekitai vs. Gorenger.