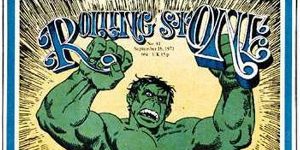 That’s right, that’s right, don’t be sad and blue, as it’s time for a new Fabulous Find, and this week I’ve pulled from the vault the Rolling Stone issue, # 91, dated September 16, 1971.  This issue was still published in the early newspaper format, prior to it becoming a large-size magazine, long before it became a regular-size magazine that you find on the newsstands today.  The outside cover features a drawing of the Incredible Hulk drawn by Marvel Comics’ Herb Trimpe.  Trimpe was the regular artist on the Hulk’s comic at the time, so it was a logical choice to go to him for the cover. 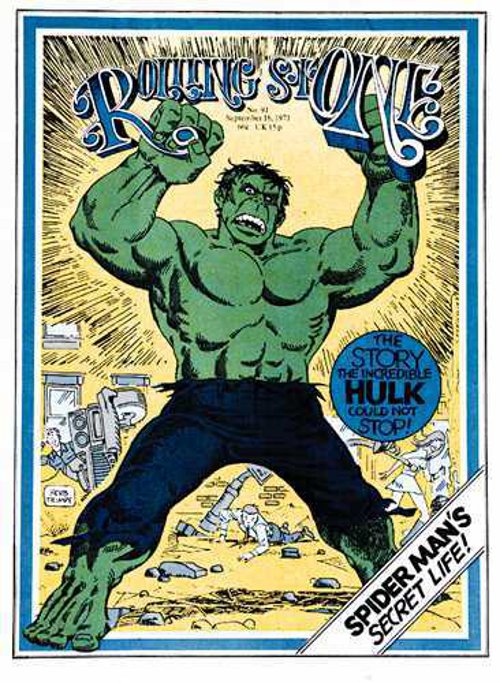 Needless to say, within the pages of this edition is also found a six (6) page article entitled; “Face Front.  Clap Your Hands!  You’re On The Winning Team!”, which is written by Robin Green, with accompanying photos by D. E. Leach.

Here is the art header for the article: 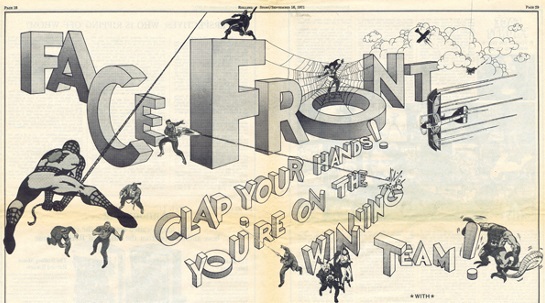 It appears that the artwork here was taken from various Marvel comics, rather than a new drawing created for the article, as I can spot figures drawn by Jack Kirby, Jim Steranko, John Romita Sr and others.

Robin Green had previously worked for Stan Lee and Marvel Comics, three years prior to writing this article for the Rolling Stone.  She had replaced Flo Steinberg, as the face that dealt with the public if they found their way to the Marvel Bullpen.  Officially, Stan’s secretary, but more of a girl of all trades, as was Flo, before her.

Robin looks back with a fond heart to her days working with the Marvel staff and freelancers.  Then further delves into things by interviewing; Flo, Herb, Roy Thomas, Stan, and even going to visit Steranko, and getting his take on his time at Marvel. 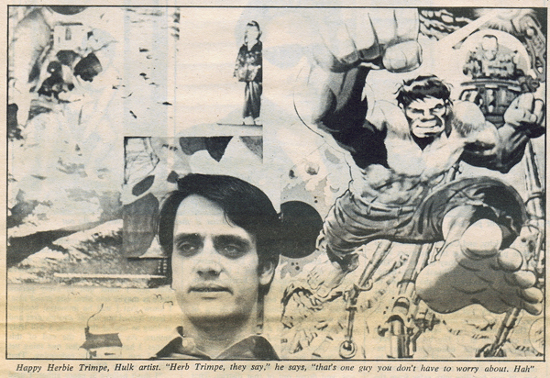 And how about a picture of the whole Marvel Bullpen gang from the day of Green and Leach’s visit: 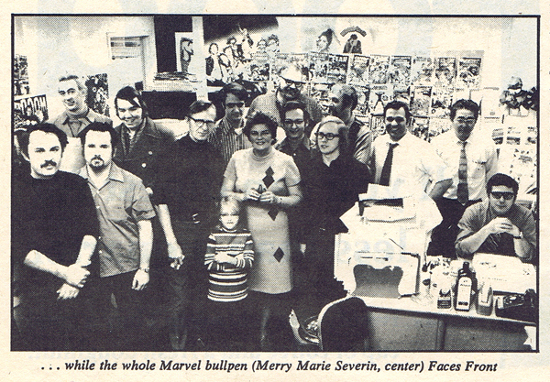 That looks like Gil Kane in the back row, all the way over on the left.  That is clearly Marie Severin front and center, with Roy Thomas to the right, and to his left, John Romita Sr., and that’s Herb Trimpe looking over Marie’s right shoulder.  That is “big” John Verpoorten up top, slightly right of Marie and Morrie Kuramoto, staff letterer back in ’71, second from the right, standing next to Romita.

The article was pretty revealing back in 1971, at least to me.  Living in Michigan, I never had a chance to “drop in” on the Marvel offices like some kids and teenagers, so it was great to be able to read of some of the “goings on” and some of the great stories that the Marvel staff shared with Robin.  I didn’t know who had replaced Flo, only that she had left to find her own “fame and fortune, so it was cool to find out that her replacement was Robin, but that only led me to ask, who was Robin’s replacement?  And for the record, I’m still wondering!  Anyone know?

Anyway, this forty-five year old collectible, can see be found today and at reasonable prices: $15.00 to $25.00, depending on the condition of the item.  Personally I think it’s worth the cost, even though I paid much less for it back in the day.  My copy is starting to crumble along the edges as I look at it today, but worth it to once again visit the Marvel Bullpen of 1971.

That’s all for this week, but please be sure to return next week, for a new RETRO REVIEW.  I’m thinking of sticking with Marvel for a bit and maybe with the color green, like the Hulk, so maybe you should be thinking … Green … and Lizard.  Nuff said.

Stay well and I’ll be seeing you …