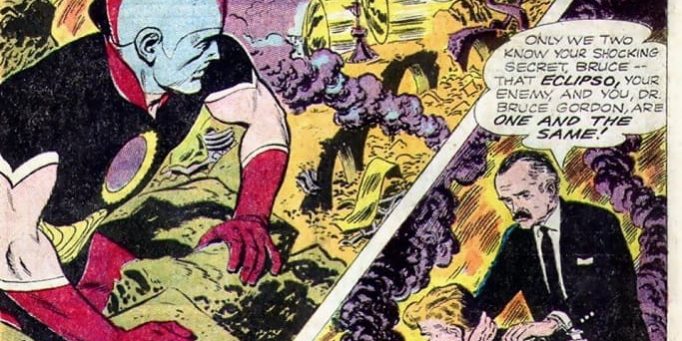 Another Silver Age comic this week from DC Comics, it’s House of Secrets # 66, cover dated June 1964.  This comic features on the cover, for the first time. the villain, Eclipso!  And that cover is provided by the team of Dick Dillin on pencils and Sheldon Moldoffon on inks!  Eclipso had originally made his initial appearance here in House of Secrets # 61, a year earlier, but it took till issue # 66 for him to gain the cover from Mark Merlin, who he now shared the book with.

Issue # 66 has the Eclipso story entitled; “The Two Facws of Doom!”, written by Bob Haney and pencilled and inked by the great Alex Toth.  It opens with Eclipso blowing open a truck to steal it’s cargo, then quickly switches to Eclipso breaking into a lab to steal some secret plans.  But as the readers’ perspective pulls back it is revealed that this has all taken place on film, that is being watched by the hero Bruce Gordon, his friend Professor Bennet and the Professor’s daughter, and Bruce’s love interest, Mona!

The story proceeds with Bruce showing the other two his latest invention, an utra-violet gun which Bruce hopes to use on Eclipso to turn him into a force for good, rather than evil.  It is then that a strange meteor crashes into Earth and a wierd space creature crawls out of the wreckage!  Bruce and company race to the site of the meteor crash only to be exposed to an eclipse (they seemed to happen more regularly in the comics than they did in real life!) before they can reach the meteor.  Bruce transforms into Eclipso, who races away to retrieve his black diamond and costume from the lab where he has hidden them.  As he races away, Mona is able to expose him to the rays from the ultra-violet gun.

It seems to have no effect, but when Mona and the Professor return to the lab, they find an unconscious Eclipso!  When he awakens he talks like Bruce, rather then Eclipso, and he wants to deal with the alien creature that’s on the loose.  Eclipso rushes to the site of the crash and confronts the creature and manages to defeat it, and in doing so, gains the abilty to repell objects!  He also reveals that he has only been play acting as good, and is actually, his normal, evil self.

He goes on a rampage using his new powers, but Professor Bennet creates an artifical eclipse and Mona hurls a timely light bomb, which once again drives Eclipso from Bruce’s body, thus saving the day.  The story ends with Bruce Grodan once again vowing to determine a way to do away with Eclipso once and for all.

Oh yeah, it also has a nice Mark Merlin story, “The Man Who Played Sorcerer” in the comic, as well.  And as I’ve always had a soft spot for Eclipso, the villain and a hero within one man, and this is a pretty typical adventure from this original run from the early 60’s, I give it three (3) out of five (5) Legion Flight Rings!