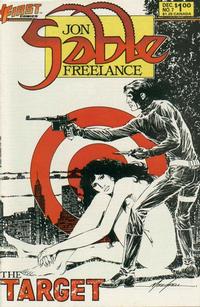 This week I’m writing about Jon Sable, Freelance # 1, from First Comics.  The comic is cover dated December 1983 and features a very nice Mike Grell cover.  It’s done as a black and white drawing with red accents, as you can see to the left.  The story is entitled; The Target” and is is written and drawn by the aforementioned Mike Grell.

The book opens with Sable on the Tonight Show with Johnny Carson, though it’s never identified as such, in his identity of B. B. Flem, talking about his latest children’s book about leprechauns!  After the two of them joke around for a bit, including “Flem” admitting the the B. B. stands for Basil-Bob!, Johnny introduces another guest, an aging stuntman, Jason “Sonny” Pratt.

After the show, it is revealed that Sonny once worked with Sable, helping him with his fencing for the ’72 Olympics!  Sonny and Sable soon get re-acquainted and Sable invites him to visit him in New York.  The scene then shifts back to New York, to a murder attempt on an ex-mobster’s widow.  She is being moved to a new safe-house, in preparation for her testimony in the murder of her husband.  Her stand-in is blown up and she manages to escape the police protection in terror.

Meanwhile, Sable has returned to New York, where he discovers a message that has been left for him from Mrs. Stasic, the widow, mentioned above.  She wants to hire him, but only if he’s good enough to find her!  Needless to say, Sable is indeed able to locate her, in just under two hours, where she is “hiding in plain sight” disguised as a dancer.  It’s at that point the bad guys also locate her and after a shootout in the bar, Sable and Mrs. Stasic escape.

Seeking help from his publisher, Eden Kendall, Sable manages to get Mrs. Stasic to an empty building, her husband planned to open soon.  Sable puts her on the top floor and procedes to disable the elevator and barricades the stairwells leading up to the penthouse.  They wait out the weekend together and the night before she is to testify, the bad guys once again locate them.

They storm the building with ten men, plus their leader, Joe Baylor.  Sable manages to fight off half of the bad guys before a couple are swung into the penthouse in a steam shovel bucket.  Sable rushes back and saves Mrs. Stasic, only to have Baylor blow up the building around them!  Is this the end for Jon Sable?

Of course not!  Sable and Mrs. Stasic managed to get into the steam shovel bucket before the building collapsed around them and they are both safe, though trapped in the bucket until the police arrive.  The story ends with a nice interaction between Sable and Sonny, who has come to New York to for a visit.  Sonny arrives swinging through a skylight in Sable’s apartment, dressed as Zorro.  He and Sable cross swords, but Sonny “wins” and after leaving the mark of Zorro cut into Sable shirt, swings off again!  Mrs. Stasic then utters the “famous last words”, so to speak; “Who Was That Masked Man?”  A pretty nifty ending, even though those words better fit the Lone Ranger than Zorro, but they work well here, nevertheless! 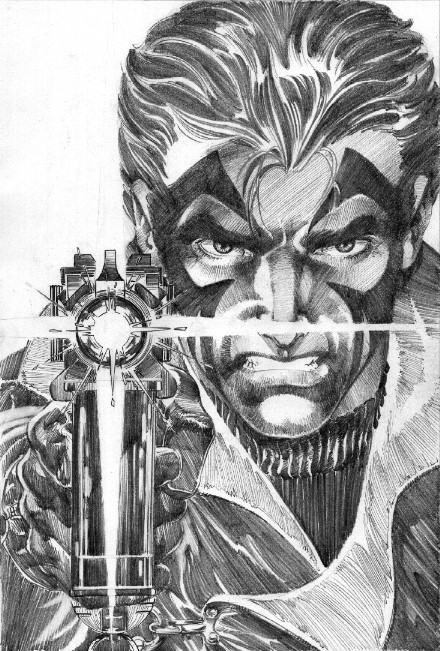 Sable was an interesting book for a few years and actually lasted for fifty-six (56) issues, running from June 1983 through February 1988.  It was a nice change of pace from all the super-heroes being published.  IDW Publishing brought Jon Sable back for a limited run in 2005 and again in 2009.  So the character is still around and obviously near and dear to the heart of creator, Mike Grell.  I give this issue three (3) out of five (5) Legion Flight Rings!