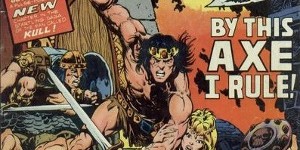 Welcome back for another edition of my RETRO REVIEW column.  This week it’s time to pull a Marvel Comic book from out of the vault.  So after digging around for a while, I’ve unearthed; Kull The Destroyer # 11, cover dated November 1973.  The Kull comic book had been around since 1971 when the first issue came out as; Kull The Conqueror. There were a couple of trial issues in June and September, then it stopped publication.  Then, cover dated April 1972, Kull appeared in Monsters On The Prowl # 16 for his third outing.  Then the Kull The Conqueror comic was back with issue # 3, cover dated, July 1972.  This series ran ten bi-monthly issues, then was converted to Kull The Destroyer with issue # 11.  And it’s this issue that I am looking at in this column.

This comic has a great cover by artist Mike Ploog, who provides both the pencils and the inks.  Take a look: 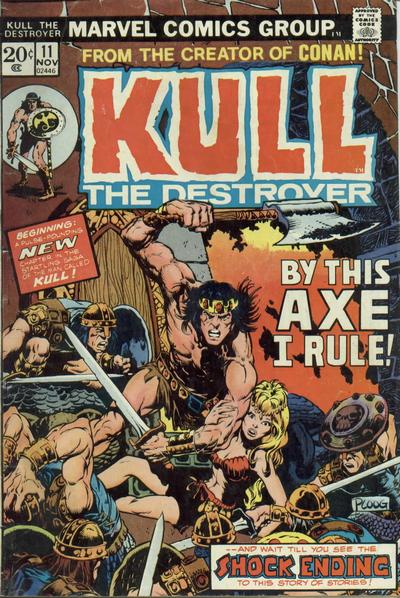 As you can see from the blurb on the cover, Marvel is telling it’s readers that this is a “pulse-pounding” new chapter, hoping, I would guess, to entice new readers to the book, hence the name change and the new artist.  The previous artists, the brother – sister team of John and Marie Severin, did a great job, but I suspect not enough people were picking up the comic, so changes to the creative staff were made.

Also from the cover you can see the title of the story is “By This Axe I Rule!”, or is it?  Once you turn the cover and open the comic, you’ll see that the actual title of the story is: “King Kull Must Die!”  What’s up with that?  Sorry, but I don’t have the answer.  Marvel Comics does tell us that the story is freely adapted from the Robert E. Howard short story; “By This Axe I Rule”.  So I wonder why they didn’t go ahead an use this title, especially since they used it on the cover?  I guess the writer, Roy Thomas could tell us, if he remembers.  So Roy, if you happen to read this column let us know!

The story opens with a great splash page drawn, again by Mike Ploog, who provides both pencils and inks for the comic.  I don’t generally mention the colorist, but lovely Linda Lessman does the honors here.  And because I’m in the mood, here’s that splash page for your enjoyment: 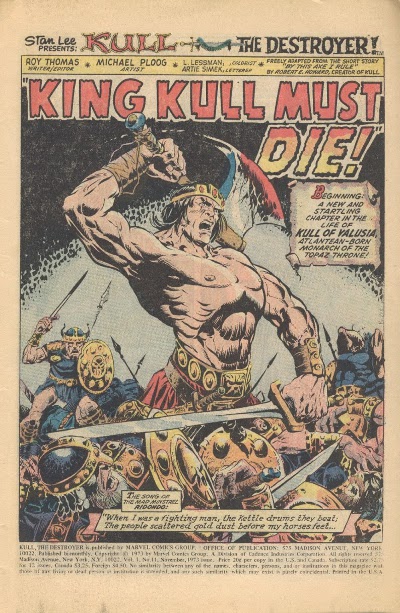 The story then opens with Kull talking to his friend, Brule, saying that now that he is King, the fact that he is foreign born, is causing the Kingdom to question is right to leadership.   The scene quickly shifts to a secret meeting where people plot the death and overthrow of Kull, with the intention of placing a Baron on the throne.  The scene again shifts back to Kull, in his throne room, where is thinks back to his younger years and Thomas gives us a three and a half flashback look at Kull’s beginnings.

Later in his private quarters, as Kull broods, the plotters, with the assistance of a number of soldiers, break into Kull’s quarters and attack!  He bravely faces the horrible odds with a sword and his trusty axe.  Even after receiving a serious wound, he continues to fight and even seems to be winning.  One man against twenty, but Kull fights on and holds his own until one of the plotters reveals himself to be Kull’s arch-enemy, the Sorcerer, Thulsa Doom!

Using his sorcery, Doom makes it so that Kull’s axe is too heavy to lift, and now weaponless, Kull is overcome.  Doom removes Kull’s crown and places it on his own head and Kull is dragged off to the castle’s dungeons.  And there the story ends.  Thulsa Doom now on the throne and Kull rotting in his own dungeons!

Now that’s a cliffhanger if there ever was one!  Anyone reading that issue back in 1973, would certainly have searched out the next issue to see what would happen.  Though it did take three months, rather than the planned two months, for the next issue to appear on the stands.  It finally appeared and we got to see what happened next.  Unfortunately, the next issue didn’t look nearly as good as this issue, as Ploog only provided the pencils and not the inks.

When Ploog inked his own pencils there was nothing that looked better back then, but when others inked his pencils something was lost and the final art was just not the same, and dare I say, not as good.  Well, that’s my opinion, you may have your own.

So if you haven’t collected the Kull series of comics, you are missing something and I certainly recommend you pick them up if you get the opportunity.  That’s it for this week’s RETRO REVIEW, but be sure to stop in again next week for a new Fabulous Find.  Be seeing you …