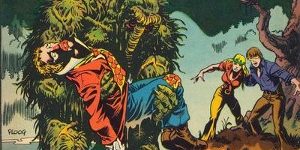 Time once again for a new RETRO REVIEW for your pleasure (at least I hope it’s a pleasure).  This week it was back into the Marvel Comics section of the comics vault, where I have pulled out The Man-Thing #s 5 & 6. These two books are cover dated; May 1974 and June 1974, so they would have been on the newsstands in late winter/early spring of 1974. 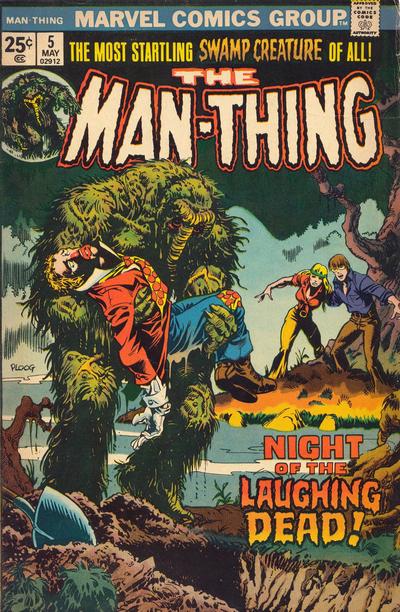 The cover is pencilled and inked by artist, Mike Ploog.  I also understand that artist, John Romita Sr. may have also made some alterations to it.  But I can’t easily tell where.  Maybe in the body of the Man-Thing and possibly in the figure of the clown he’s holding.  But, you’ll have to be the judge of that as I can’t honestly tell.

The story in this issue is entitled; “Night of the Laughing Dead” and it is written by Steve Gerber.  It is pencilled by Mike Ploog and it is inked by Frank Chiaramonte.  Things kick off with a retelling of the Man-Thing once being a man, a scientist, names Ted Sallis, who was changed into this muck creature while experimenting with a super-soldier formula.  Things quickly accelerate when we see a carnival clown commit suicide in the Man-Thing’s swamp.

The Man-Thing is drawn to the clown, even in death, due to his strong emotions prior to killing himself.  Something penetrates to the mind of the Man-Thing and he carries the body deeper into the swamp to bury him.

It’s then that the scene is shifted to Richard Rory and Ruth Hart, who readers met in earlier Man-Thing stories.  They have rented a room at a local motel, where a carnival happens to be set up nearby.  Before they reach their room, they witness an altercation between the carnival owner, Mr. Garvey and a girl, Ayla Prentiss.  Garvey strikes Prentiss and Rory goes to her aid.  But he is struck down by another carnival member, Tragg, the World’s Strongest Man (or at least that’s his carnival billing).

Ayla flees with Richard Rory and Ruth Hart in their van, but they are followed by Garvey and Tragg.  As they drive into the swamp, they see what appears to be Darrel, the clown, lit by a spotlight.  He turns and goes into the swamp and the three young people follow.

Meanwhile the clown appears to the following Garvey & Tragg and cause them to crash their truck.  Darrel lures Tragg into following him into the swamp and eventually Garvey follows.

Rory, Hart and Prentiss stumble around the swamp until they see the Man-Thing carrying the limp form of the clown.  They wrongly assume that the Man-Thing has killed the clown, until Rory discovers that the clown was killed by a gunshot.  Tragg catches up to them and battles the Man-Thing til he is exhausted.  It is at that moment that the ghost, or maybe spirit or soul, of Darrel, the clown, rises from his body and tells the three young people that they will serve as his actors in a play depicting his life.  And it is here where this issue ends.

Issue # 6 appeared on the stands the very next month, and here is that cover: 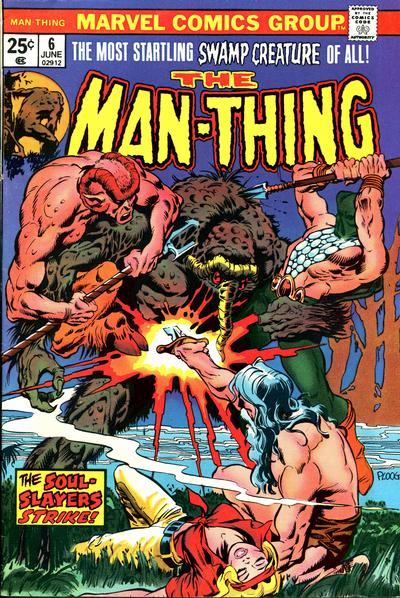 This cover is again pencilled and inked by artist, Mike Ploog.  And in fact, the creators of this issue are the same as issue # 5; Gerber, Ploog and Chiaramonte.  This issues’s title is; “And When I Died…!” and it picks up right where issue # 5 left off.

Using his ghostly powers the clown transforms Rory into a young Darrel, Man-Thing serves as Darrel’s anger, Prentiss is Darrel’s childhood sweetheart, Hart into Darrel’s mother, Tragg into a childhood bully and the newly arrived Garvey, as Darrel’s father.  They are to preform in front of three hooded “critics” for the fate of Darrel’s soul!

We the reader, as well as the “critics” get to see Darrel’s unhappy childhood play out, then his young adulthood leading up to his joining the carnival to try to make people happy, as a clown.  But even his happiness comes to an end when he discovers that Prentiss has only helped him so that Garvey could gain is wealth for the carnival.

Finally Darrel feels he has no other recourse than suicide.  The critics  condemn the clown, Darrel, to “total death, oblivion”.   At this moment, Man-Thing steps in and battles the three “critics”, gaining the slight upper hand, when, of course, Prentice has seen the light, but too late, and admits she loves Darrel.

With this admission the “critics” stop fighting and the agent of heaven gestures and they all disappear.  The remaining group of people turn to find the corpse of Darrel now has a smile upon his face and Prentice states that maybe the “critics” finally understood “that a man who can inspire laughter and joy is the holiest man of all”.

Wow, not your typical super-hero fare, even for 1974!  Not only is the story thoughtful and well told, but the art, by Mike Ploog and Frank Chiaramonte, is excellent and really supplies the needed atmosphere.  If you don’t already have these two issues in your collection I think you should!

That’s all for this week’s RETRO REVIEW, but be sure to be back next week for the first 2017 Fabulous Find.  I hope your holidays were wonderful, stay warm and I’ll be seeing you …