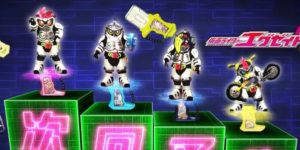 Welcome to Tokusatsu Gesundheit, where today I’m getting caught up on Super Sentai and Kamen Rider (I was like 20 weeks behind, which seemed…excessive). Therefore, we’re watching the first six episodes of Kamen Rider Ex-Aid, airing weekly in Japan right now.

Five years ago, ten video games in development by the Genm Corporation were hit with mysterious, catastrophic glitches…that quickly metastasized into a computer virus. This virus, known as “The Bugsters”, is set apart from others of its ilk by infecting human beings rather than electronics (roll with it). Genm quickly created corrected versions of these games in special cartridges called “Gashats” that allow an elite team of doctors (selected in partnership with the Ministry of Health) to transform into Kamen Riders, destroy The Bugsters, and cure patients with the power of video game violence.

Kamen Rider Ex-Aid airs at 8 AM Sunday mornings in Japan, immediately following Doubutsu Sentai Zyuohger, as part of the hour-long Super Hero Time block. This block, populated by these two tokusatsu franchises, has been running since 2003. Both franchises run year round, with the next entry in the franchise starting up the week after the finale of the previous, and change roughly four months apart – New Kamen Rider starts in September, new Super Sentai in February.

The first six episodes do a solid job of setting up the characters, gimmicks, and myth arc of the series. They’re compelling to the point that I binge watched them, something no Rider or Sentai series has inspired in me in a while. While still in its relative early stages, the series is shaping up to be a strong entry in the franchise and I’d encourage you to check it out. 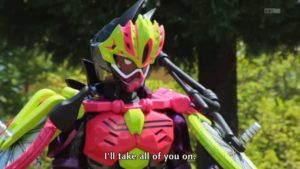 And we didn’t even get into the overarching threat introduced (pictured above).