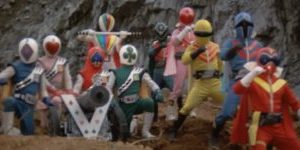 Welcome to Tokusatsu Gesundheit, where we watch stunt men struggle valiantly to make ridiculous costume work.  Rarely is that more true than in today’s feature, J.A.K.Q. Dengekitai vs. Gorenger.

The costumed super spies of J.A.K.Q. Blitzkrieg Squad uncover a plot by the nefarious organization known as CRIME to start a nuclear war using their experimental UFO. As they infiltrate CRIME’s base and dig up more info on the evil plot, they discover that Japan’s other team of costumed spies, Secret Squadron Gorenger, is already on the case. These two Sentai (literally: task forces) will have to team up to take a bite out of CRIME!

The Gorengers (the Engrish is the official translation)

Shotaro Ishinomori, who we mentioned last week, created Himitsu Sentai Gorenger in 1975. The series chronicled a team of super powered spies (the Red, Yellow, Pink, Blue, and Green Rangers) battling the monsters of the Iron Cross Empire. It was a smashing success, running for 84 episodes.

Ishinomori followed it up with JAKQ Dengekitai, a show about a team of mostly-willing cyborgs (Codenamed Jack, Ace, King, and Queen – get it?) fighting the creatively named organized crime outfit CRIME on behalf of Interpol. It was considerably darker and edgier than its predecessor, kids hated it extensive retooling (including the addition of a more powerful, funny fifth ranger named Big One) didn’t help, it was cancelled after 35 episodes, and damned near killed the franchise.

The Leaders of CRIME, who shop at the same stores as Lady Gaga.

This is the most easily available example of the first two sentai, and it’s pretty intriguing. Cheesiness of a 1970’s show aimed at kids aside, the tone and plotline of the film is markedly different from what decades of Power Rangers has trained me to expect. It’s really enjoyable, it’s short and to the point, and it gives you a feel for what the shows were about. Definitely worth watching.

There’s also a bit extraneous exposition linking all of Ishinmori’s then-current shows into one universe. It’s pointless but fun.

NEXT WEEK: We’ll talk about how Marvel saved Sentai while reviewing the first two episodes of Spider-Man!