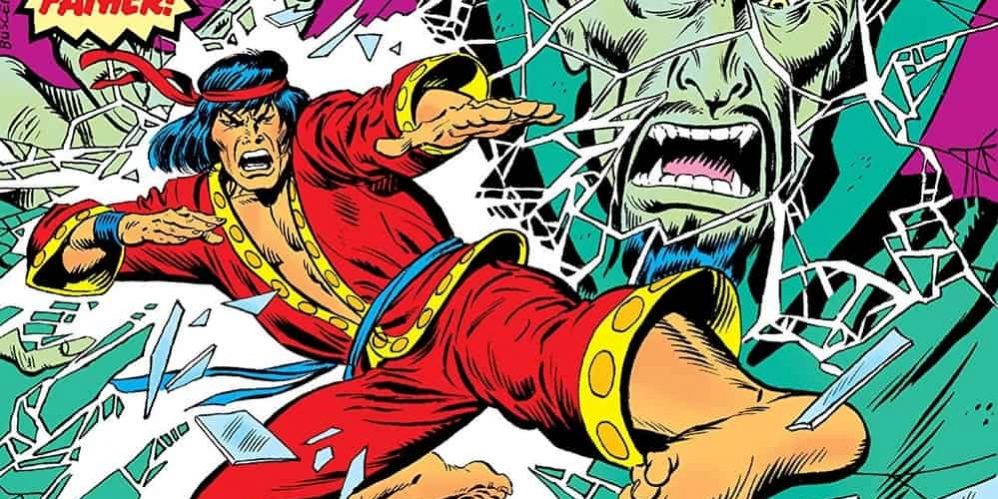 This week, I present Marvel Comics’ Master of Kung Fu # 44, cover dated September 1976.  It features a cover drawn by “big” John Buscema and inked by Al Milgrom.  The story inside the comic is entitled; “Prelude:Golden Daggers (A Death Run)”.  The book if you didn’t know, featured Shang-Chi, the son of the dreaded Oriental villain, Fu Manchu!  The comic also featured supporting characters created by author Sax Rohmer, who created Fu Manchu and wrote a series of novels featuring the evil doctor!

The story is written by Doug Moench, pencilled by Paul Gulacy and inked by Jack Abel, and is a prelude to a six part storyline beginning in issue # 45 and culminating in issue # 50.  And rather than trying to cover that whole storyline, I’ve decided to just focus on this, the prelude!

First off, let me say I think Gulacy was coming into his own as a penciller on this comic, and I think, clearly, one of his influences is Jim Steranko.  This story is beautifully drawn and even inker Jack Abel manages to do an excellent job by not covering up Gulacy’s super pencilling work.  I’m not much of a fan of Abel’s inks, but he doesn’t hurt this comic in the least.

Moench begins the story where the previous issue left off, at the Switzerland estate of Herbert Griswold.  The villain Shockwave has been defeated and MI-6 agents are seen carting him off.  Shang-Chi learns the secret history of Agent-D, who turns out to be Ducharme, female servert to Fu Manchu!  She’s been secretly working for Sir Nyland Smith for years, providing him information regarding Fu Manchu’s schemes when she can safely do so.

The scene shifts back to England, where it’s revealed that Doctor Petrie, Sir Nyland Smith’s closest friend, is working as a spy for Fu Manchu and he’s responsible for planting a bomb which has injured Black Jack Tarr.  Smith and Petrie visit Taee in the hospital and Agent Clive Reston meets up with Shang-Chi and Leiko Wu.  They separate for some dumb reason and Leiko goes one way on a motocycle and Restin and Shang-Chi travel by sports car by another route, to later meet up.  Presumably, it was safer to travel separately.  Yeah, right!

Along the way, Restin admits that he is a rival to Shang-Chi, for Leiku Wu’s love, and he “makes a bad rival” as he fights dirty!  This set up future stories for the comic in the months to come!

Each of them meet up with trouble along the way.  Wu is waylayed and possibly captured, but Restin and Shang-Chi make it to their destination, only to be met by more masked gunmen.  A little Kung Fu action, and they overcome all but Shang-Chi’s sister Fah Lo Suee and her assassins of the Golden Daggers, hence the title of the book.  It’s revealed on the letters page that the assassins were to have played a bigger part in this comic, but Gulacy’s pacing was slower than Moench had planned for.  SO the actual confrontation with the Golden Daggers will have to wait until next issue.

Prior to the last page reveal of Fah Lo Suee, there was one more scene shift, back to a second hospital in England, where we witness Doctor Petrie gunning down Sir Nayland Smith and blaming Shockwave, saying he had grabbed his gun and shot Smith.

Actually a pretty exciting beginning to a multi-part storyline.  The art is beautiful and the storyline intriguing!  And this book moves closer to a spy series, to replace the lamented Jim Steranko’s great Nick Fury book which no longer was being published!  A great beginning all in all.  And Shang-Chi battles with his father, Fu Manchu, are some of the best stories featured in  this long running Marvel Bronze-Age comic!  I give it four (4) out of five (5) Legion Flight Rings!

One thing I do want to also mention, is that each of the issues in this storyline, is narrated by a different character.  Don’t believe me, then check it out, beginning here in The Hands of Shang-Chi, Master of Kung Fu # 44 from 1976!  You won’t be sorry!