Hello again!  I’ve been missing for a couple of weeks due to a vacation and then a website upgrade, but I’m back once again.  You just can’t keep me away!  This week I thought I’d do another RETRO REVIEW, even though it might be time for another Fabulous Find. Frankly I’m just in the mood for the one and not the other.  How’s that for fickle?  And since I’m the one writing, I get to choose!

Recently I’ve been hearing a lot about Marvel Comics getting ready to bring back the character known as Miracleman.  I think the formal announcement was made at the New York Comic Con recently held.  Marvel has owned the rights for a number of years and has been promising his return, but we’ve only seen a couple of reprint books featuring the original writer-artist, Mick Anglo, and nothing new.

The history of this character could take up pages and pages, explaining what went on, but the simply story is Anglo created him and named him Marvelman in the fifties, as sort of England’s answer to Captain Marvel.  He first appeared in 1954 and was published into 1963, when his comic was cancelled.  But the character refused to die!

This RETRO REVIEW is of Miracleman # 1, published by Eclipse Comics and cover dated; August 1985! 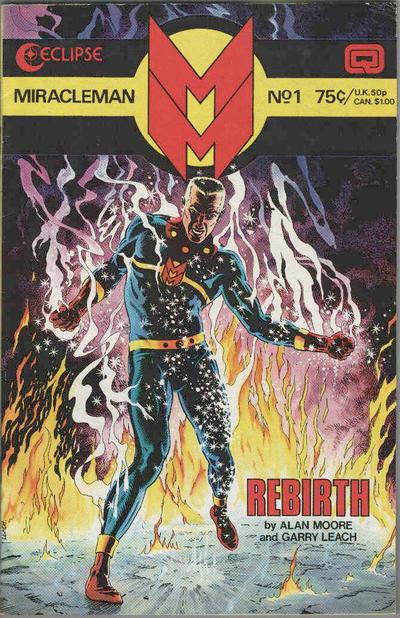 In the early eighties, 1982, to be exact, Marvelman was brought back in a new black and white anthology comic book, entitled; Warrior.  The new adventures of Marvelman were written by Alan Moore and drawn by Garry Leach.  His adventures continued through issue number 21 of Warrior, where the story stopped but was resolved/ended.

Then in August 1985, Eclipse Comics began reprinting the stories from Warrior, here in America!  The name Marvelman was at that time changed to Miracleman, due to threatened lawsuits from Marvel Comics, who were none to happy to have someone here in America publishing a book featuring a character named Marvelman!

This is when I first became aware of the character and some of his history.  The first six issues from Eclipse reprinted the stories that originally ran in Warrior numbers 1 through 21.  The first two issues featured Garry Leach artwork, but issues three through five featured artwork by Alan Davis, and the sixth issue had art by Chuck Beckum (alias, Chuck Austin).   Like issue number 21 of Warrior, issue six ended with the words … to be continued!

But unlike Warrior # 21, there was a Miracleman # 7 from Eclipse Comics!  Alan Moore left the book after issue number 16, but he handed off the scripting reins to another pretty good writer, by the name of Neil Gaiman!  Gaiman wrote the book til it’s cancellation after the publication of issue # 24.  I understand that the twenty-fifth issue was completed but never saw print due to the collapse of Eclipse Comics.

When Gaiman came on board with issue 17, he was also joined by artist Mark Buckingham.  Not to shabby, eh?  Plus the covers to issues # 23 and 24 were supplied by on of my all time favorite artists, Barry Windsor Smith, as well.  Wow, all that and I’ve not even reviewed the first issue here in the United States.  So I better do that, or this won’t be a RETRO REVIEW column!

Moore starts off the first issue with a retelling (?) of a story set in 1956, (re)introducing the characters of Miracleman, Young Miracleman and Kid Miracleman.  Remember this was a take off on the old Fawcett Captain Marvel books which featured the whole Marvel family!  Leach also uses a simplified art style to reflect the 1950s.  A very nice touch.

Chapter two is entitled; “A Dream of Flying” and brings us and the main character into the present, where Mike Moran (Miracleman’s other identity) no longer remembers he is Miracleman, but has these complex dreams when he sleeps, where he finds himself flying!  The next morning, covering a story for the newspaper, where he works ,he suffers a migraine headache and then is threatened by plutonium highjackers.  As he is being tended he remembers and says the word kimota, which transforms him into Miracleman!

The transformation also restores his memories and he quickly takes care of the highjackers.  This ends the second chapter in the first issue.  The third begins with his return home to his wife, Liz, as Miracleman!  He retells his “origin” tale of how he received his powers and how in the fifties he was joined by two other Atomic powered heroes, Young Miracleman and Kid Miracleman, forming the Miracleman family.  He tells her of their battle against various villains and one in particular, Doctor Gargunza, who returned to plague them over and over.

In fact it was Doctor Gargunza who built and exploded an A-Bomb, which nearly killed Miracleman and led to his forgetting his super-powered identity and secret word which transformed him.  The last chapter, number four in this first issue, brings back Kid Miracleman.  He wasn’t killed in the explosion either, nor did he lose his memory or powers!  In fact, he’s changed quite a lot and is now something … evil!

And that’s where the first issue ends.  What a cliffhanger!  With our two former heroes set to face off against each other in a battle royal!  It sure made me rush out to find the next issue.  But I had to wait two months, until the second issue, dated October 1985 was published. 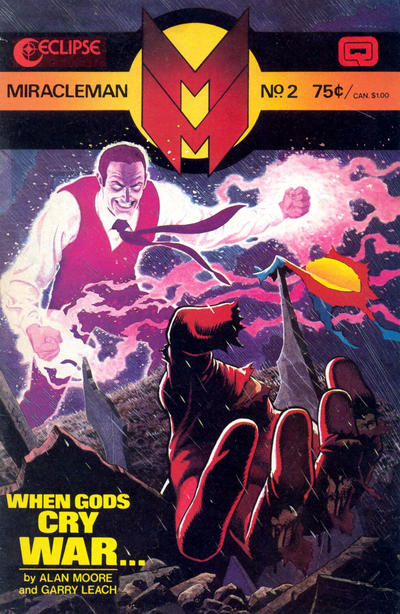 I hope that Marvel Comics chooses to make reprints of this material available, when their planned new series starts up , if not, do yourself a favor and search out this series and add it to your collection!  You definitely won’t be sorry!