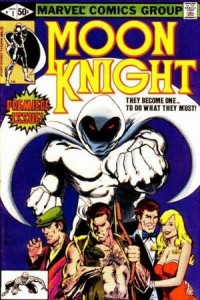 From Marvel Comics, cover dated November 1980, is the first Moon Knight # 1. The character debuted five years previously in Werewolf by Night # 32 and # 33, in a story written by Doug Moench and drawn by Don Perlin during August 1975. The character proved popular with Marvel readers, and soon also guest-starred in Marvel Spotlight # 28 & 29 in 1976. He then went on to be featured in Spectacular Spider-Man # 22 & 23. At that point, he then was used as a regular guest-star in a few other Marvel comics. But he finally hit the big time when he was granted a back-up feature in the Hulk! Magazine, in issues # 11 – 15, 17 & 18 and #20.

Moon Knight was actually Marc Spector, the son of a Chicago rabbi, who became a heavyweight boxer, a U.S. Marine and finally a mercenary for hire. During his time as a mercenary he becomes friends with a French pilot by the name of Jean-Paul DuChamp, whom Marc calls, “Frenchie”! This first issue drops the readers into Egypt, where Marc and Frenchie are working for another mercenary, Raoul Bushman, on an archaeological dig. The dig has discovered an ancient temple with many artifacts, including a statue of the Egyptian god Khonshu.

Bushman decides to loot the recently discovered temple and kills Dr. Alraune, the lead archaeologist. In response to Alraune’s murder, Spector challenges Bushman to personal combat. Bushman beats Spector, nearly to death, and leaves him to die. Roaming Egyptians, who worship the ancient Egyptian gods, find Spector and carry him into their lost temple and leave him in front of the statue of Khonshu.

Spector’s heart actually stops and Khonshu appears to him in a vision, offering Spector a second chance at life if he will become the god’s avatar on earth! SPector awakens and wraps himself in the silver shroud that has covered Khonshu’s statue. Spector again confronts Bushman, and this time defeats him! Spector returns to America with Dr. Alraune’s daughter, Marlene, Frenchie, and the statue of Khonshu, where he decides to become a crime-fighter. He creates his costume based on the silver shroud of Khonshu and becomes, Moon Knight!

In an interesting twist, Spector also create a couple of alternative identities, besides that of Marc Spector. To distance himself from his mercenary past, he creates the identity of millionaire entrepreneur Steven Grant, He also creates, Jake Lockley, a cab driver, so he can remain in contact with the street and criminal element. Secondary characters, Betrand Crawley, as well as, Gena Landers and her sons are also introduced.

But this first issue isn’t over just yet. Bushman has managed to track Spector down in America and the two face off again! Just when it seems that Bushman will overcome Moon Knight, Marlene provides a distraction, which allows Moon Knight to win! And it’s Marlene who provides the last words of the issue; “Behind the legend, is a man. A good and powerful man. And no matter how many roles you play, false or true, you must never abuse your power. You must never forget who that man really is.”

Kind of reminds me of the lesson Spider-Man had to learn in his introduction; “With great power, comes great responsibility”! All in all an excellent origin issue! A dense story by Moench with terrific artwork by Bill Sienkiewicz. I give it four (4) out of five (5) Legion Flight Rings!