For over two decades, Motor City Conventions pretty much had the metro Detroit comic / pop culture convention circuit to themselves, putting on the Motor City Comic Con, the only such large scale convention every spring, and for many of those years, also in the fall. That dynamic changed last year with the launch of Detroit Fanfare in October, a show that focused more on comic books and comic creators and less on other media that MCCC had become known for spotlighting.

Prior to DFF, as well as a planned MCCC fall show that was canceled, I wrote at length about how the modern day comic / pop culture conventions had their roots in Detroit here. And about the history of comic conventions in Detroit, over here. And how the addition of a second major con might reshape the convention landscape, right about here. And, speculated on whether these two shows could play nice together, way over . . . here.

Now, optimist that I always am, I envisioned a future where the metro Detroit area could support two major shows, if strategically placed with respect to each other and continuing their focus on slightly different areas of pop culture so that they would be chasing after a shared but not identical audience. MCCC organizer Michael Goldman, in fact, had demonstrated that this was possible, by putting on the now-defunct Chicago Comicfest in the Windy City, a show that took place several months earlier than the much larger Wizard World Chicago. Much like Detroit Fanfare’s goal was to bring back comic cons of the old days, Comicfest’s intent was to mimic the kind of show WWC was in its original Chicago Comicon days. And to this day, that precedent of sorts continues in Chicago, with pop culture-heavy WWC seemingly and successfully coexisting with the younger comic-oriented Chicago Comic & Entertainment Expo (C2E2).

Since writing that piece, both Detroit Fanfare and Motor City Comic Con have each put on a show. Last fall’s DFF was a success by all accounts, and the large crowds at this past weekend’s MCCC would certainly indicate the same. It’s pretty easy to conclude that each show succeeded doing what they set out to do, and that the model of similar but not identical shows held months apart in the same market can be sustainable. Being the optimist, remember, I like to think of these shows as cohabitors rather than competitors, as long as their reach is in different enough directions at different enough times. 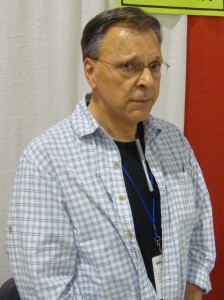 But, it’s interesting to observe that, after the success of DFF, the first MCCC in its wake featured a stronger lineup of comic creators than had been seen at that show in years, one that included veterans such as Howard Chaykin, Bill Sienkiewicz, and Tim Sale. And conversely, this September’s DFF is scheduled to feature media guests such as actors Peter Weller and Thomas Jane. Maybe it’s just a coincidence that the pop culture show is going after higher-profile comic guests, and vice versa. Maybe the two are rubbing off on each other, at the inadvertent expense of their own respective missions. Or maybe a competitive attitude has taken root, with the intent of delivering a better product.

Chicago’s dual shows live together in peace. But this isn’t the Windy City; this is the Motor City. And this is what we do know: Detroit’s two shows could have, too.

But instead, they’ve elected to fight each other. And that has made things very, very ugly. How ugly, you ask? 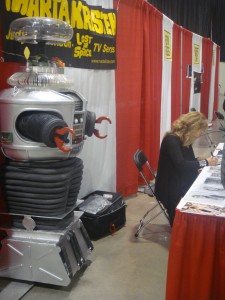 Marta Kristen, however, often is, along with her former Lost in Space cast members.

First, though, understand: there’s certainly nothing wrong with trying to assemble an impressive lineup of guests, for any show. It was certainly cool that Chaykin was at MCCC, and it will be cool to see Weller at DFF. If it’s competition that drove this, then it remains a good thing. But it’s like I never said, competition is always a wonderful thing until it succeeds. Isn’t the goal of any competitor in any marketplace is to grab as much of a share of that market as they can? Which, if completely successful, means driving the competition out of business. Is MCCC’s grab at bigger comic talent, and DFF’s at media guests, simply an attempt by each to bolster its guest list? Or is it an attempt to inch over on each other’s turf, and grab the other’s audience? The former is fine, but the latter sets a precedent for a destructive strategy where no one wins. Such a strategy not only cannibalizes the existing audience, but also moves each show from its place in the landscape closer to the other’s. And two homogenous shows, even ones that remain spaced on the calendar, run the risk of losing their fanbase. The common audience might attend one pop culture show and one comic show, but would they attend two shows that are essentially identical? The diversity is what has enabled the market to support two shows, or so it appears at this early stage. If each show wants to survive, the best thing to do is what each already does best.

Guess which we have?

The questions and rumors are endless. Who’s sued whom? Who hurled that insult? Who threw the first punch? That kind of stuff, I will not tell you. And here’s why: I’ve been on good terms with both convention organizers and their staffs for as long as I’ve known them, and I had the opportunity to talk with both sides at length over this past weekend. And in the interests of those relationships, I’m not going to dish dirt on anyone. And in the interests of professional journalism, if I can even call this journalism, I’m not going to turn this into a gossip piece, either. Instead, I’m just going to try and convey the scope of this so-called rivalry to explain why these shows are not co-existing peacefully.

The organizers have had a contentious relationship that predates Detroit Fanfare. Because of this, there are those who feel that Fanfare organizer Dennis Barger Jr initiated DFF solely to spite Goldman. This is untrue. There are those who maintain that Goldman attempted to relaunch his fall show last year solely to spite Barger in return. This is also untrue. There are accusations that both sides want the entire convention market to themselves. Probably true, as total market control is the goal of most every business in existence.

There are many, many more he-said / he-said scenarios. Like where one side sees a networking opportunity, the other sees an unwelcome intrusion. Or how the presumed reasons for the canceled fall show outnumber the true ones. And was there an instance of unprofessional behavior countered with a necessary confrontation at the party on Saturday, or was it a clever publicity ploy that was marred with unnecessary overreaction?

I have my thoughts, but I don’t know for sure. Most don’t. But again, this is the Motor City, and this is what we do know: this city has a chance to shine in comic circles, to offer a unique convention experience to anyone who can afford to come here, and take our place alongside cities like San Diego, New York, and Chicago as a special one with a notable convention. And we also know that in the overall picture, the comic industry remains a blip on the pop culture radar; a growing blip, which perhaps might make it a blop, but it’s still pretty small. There’s no place for a destructive war that could take out one, or both, of these enjoyable shows. And even if it doesn’t come to that, the news of such a rivalry in such a niche industry would sound like a petty, over-inflated squabble to the rest of the world. Comics still have a long way to go to becoming a respected form of entertainment, and that respect won’t be gained by staging its own version of the Hatfields & the McCoys.

So, again always being the optimist, I’d like to remind all that our city is big enough for two shows. It’s better for the city, the industry, and the fans within travelling range to have a choice. No one should want to have it all.

Except the city, the industry, and its fans. And we can. So play nice.

Category: Comic BooksBy Jim JohnsonMay 17, 2011Leave a comment
Tags: I Will Tell You