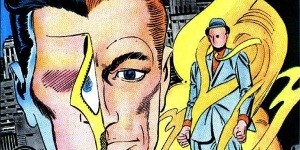 Hey gang, it’s Friday once again and therefore, time for another posting!  And this week it’s another RETRO REVIEW, for hopefully, your reading pleasure!  This week I’ve pulled out Mysterious Suspense # 1 (and only) from Charlton Comics!  It’s cover dated October 1968 and features a cover pencilled and inked by none other than Steve Ditko.  Here’s the cover: 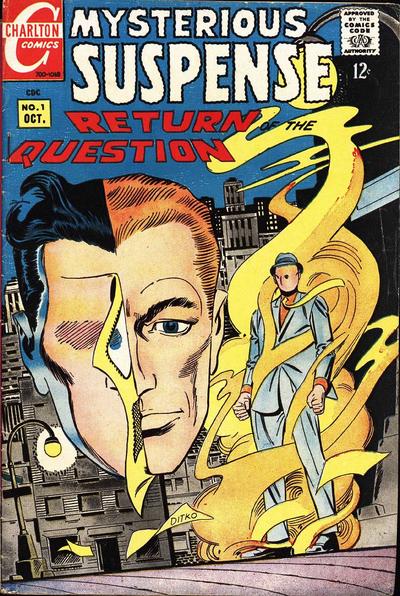 The comic features the first full length Question story!  Prior to this comic, the Question had previously appeared as the back up feature in the first four (4) issues of Charlton’s Blue Beetle comic book, for only a total of twenty-eight (28) pages.  Issue # 1 was cover dated June 1967, and the comic was published bi-monthly, with issue # 4 being cover dated December 1967, and then the comic went on hiatus for almost a year.

So it was a bit of a surprise to see this new comic title on the stands and featuring the Question as the lead and only story!  For you completists out there, Charlton did publish Blue Beetle # 5 the following month, with a Question eight (8) page back up story (cover dated November 1968).  Then the character became dormant, as Charlton Comics shut down their action hero line.  And the Question remained absent from the comic racks until Charlton Comics sold the rights to DC Comics and they began publishing the Question in 1986!

The book opens with a one page forward, or introduction, drawn by Rocco “Rocke” Mastresorio, that explains that “we’re back readers, because so many of you asked … The Question!”  The indicia indicates the the comic is to be published four times a year, but no other issues ever were published.

The story this issue is entitled; “What Makes A Hero?” and runs twenty-five (25) pages.  It is written, pencilled and inked by Steve Ditko, who was the creator of the character for Charlton the previous year, and he was the artist for each appearance, to date.

The Question, in reality is, Charles Victor Szasz, or as he goes by, Vic Sage, a former orphan, who grew up in Hub City, where the story takes place.  Sage is a investigative newscaster who uses his show to reveal misdeeds and the crooks who commit them.  The book starts with the Question trailing racketeer, Max Kroe, to a meeting with respectable businessman, Jason Ord.

Later at the World Wide Broadcasting Company, three men convince a fourth not to renew his advertising sponsorship with Vic Sage.  Then Sage is called in to meet his new sponsor, Jason Ord, the ” Soda Pop King”.  Sage, knowing that he’s crooked refuses to accept Ord as his sponsor!  Ord then plots to “break Sage” for turning down his sponsorship.  And thus begins a smear campaign against Sage, funded by Ord!

Besides two (2) panels on the second page, the hero of the story doesn’t make an appearance until page thirteen (13) where the reader gets to see Sage’s transformation into the Question!  He applies a flesh-colored, featureless mask and releases a gas hidden in a capsule in his belt, transforming his clothing to a blue hued suit and his red hair to black!  And on page fifteen (15) his question mark calling card first appears in this story, as it’s delivered to Jason Ord in a sealed envelope, telling him that he knows about him and Kroe!

When the “bad guys” come after Vic Sage, Ditko has Sage appear to be running from them, while having the Question battle them!  I’ve never seen this technique used before, or since, with the hero switching back and forth between his civilian and super-hero identities to have it appear as two different people are present.

And it is in his Vic Sage identity that he brings Kroe and Ord down, taping Kroe’s confession and committing Ord’s murder of Kroe on tape, as well!  It’s at this point that another reporter breaks the story, and claims credit for taking down the racketeer and businessman, before Sage can go on camera.  And the book ends with these words; “When does a man achieve victory? When after he has honestly applied himself to the task facing him and having overcome it … is secure in the knowledge that whatever he has accomplished, the fruits of that goal belong to him.  He will know … No one else matters!”

Wow, pretty heavy stuff!  This comic is pretty typical Ditko, of the time, heavy on dialogue and “message”, and you can’t read it in just a few minutes, like other comics published during the Silver Age, i.e. the 1960s.  And now looking back, this book was published about two years after Ditko left Marvel Comics, after his falling out with Stan Lee.  If you read those last words again, they could almost be directed at Lee, who may have begun taking more credit for Marvel’s huge success, rather than sharing that success with the artists, such as Ditko and Jack Kirby!

I don’t claim to know the workings of Steve Ditko’s mind, but what do you think?  Leave me a comment and let me know your opinion.  Take care folks and see ya next week for a new Fabulous Find!