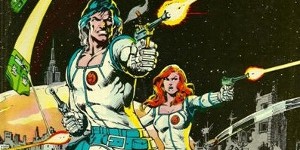 Hey ho folks!  This week it’s time once again to dig into the independent comic section of my collection.  And I’ve come out with Planet of Vampires # 1, published by Atlas/Seaboard Comics and it has a February 1975 cover date.  As most of you know Atlas/Seaboard was Martin Goodman‘s response to Marvel Comics for firing his son Chip, who he had set up to run Marvel upon his retirement.  He then tried to lure all of Marvel’s top talent over to Atlas/Seaboard by offering much higher page rates to the creators.  The only problem is that it became one of the biggest failures of all time, as the company only managed to publish one to four comics of each title before closing their doors for all time!

This week’s comic, Planet of Vampires made it to issue number three before ending it’s run.  Issue one started off with promise, as it features a nice Pat Broderick pencilled cover with inks provided by Neal Adams.  Here it is in all it’s glory: 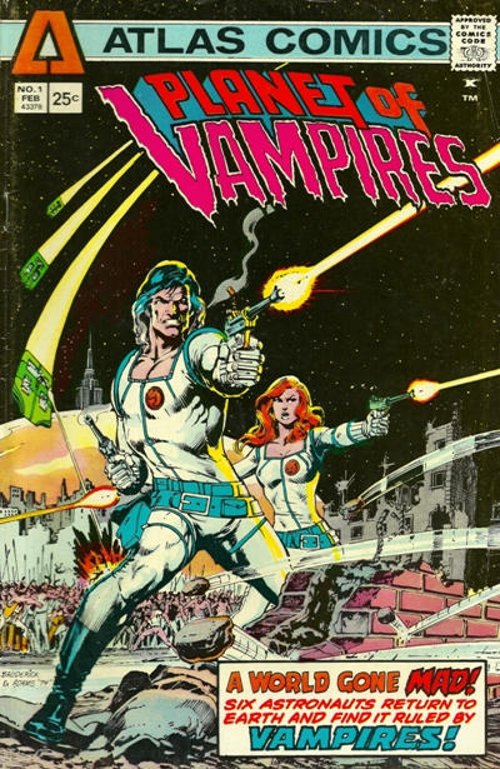 Pretty nice, eh?  And the cover copy really sums up all you need to know about the series; “Six astronauts return to Earth and find it ruled by Vampires!”  A pretty cool concept, maybe a new take on the Planet of Apes theme, but intriguing, never the less.

The story inside is entitled; “The Long Road Home” and it is written by Larry Hama.  The interior art work was done by Pat Broderick (pencils) and Frank McLaughlin (inks).  The story opens with the astronauts  returning from a  mission to Mars after five years.  The date of their return, April 21, 2010.  Hmm, I don;t seem to remember that, do you?  The astronauts are discussing their concerns since the last they heard from Mission Control was that a war had broken out, then radio silence for years.  They had remained in space hoping to hear something, but as their fuel began to run out they decided to try to make it home.

They safely make a water landing offshore from Coney Island in Brooklyn, New York.  They paddle ashore and are immediately attacked and one of the astronauts are killed.  The other four are captured by a group of barbarian people.  Apparently, one astronaut has been left with the ship, but this sixth astronaut is never mentioned again.  Before they can be taken away, the astronauts are saved by men a in a flying “skimmer”.  They are taken to a domed area with the Empire State Building at it’s center.  The four astronauts are made up of two married couples, one black and one white.

They meet the Proctor, or the man in charge.  The astronauts tell a little of their mission and the Proctor gives them a little history of what happened during and after the war.  He promises to tell them more after they have a chance to rest up.  On the way to their quarters, the astronauts witness a man trying to escape.  He is quickly recaptured and hauled away, but they hear a “dying scream” coming from the direction of where the captive was taken and the astronauts rush to see what is going on.

They find that the domes inhabitants are extracting blood from still living captives.  They rush in to stop this and are quickly set upon by the guards.  They manage to free some, but not all of the captives.  They fight their way to safety, but the two couples are forced by circumstances to split up.  The white couple, Chris & Elissa, go on foot with a couple of freed captives and the black couple, Craig & Brenda, go with the injured freed captives to escape via one of the flyers.

The issue ends with the group on foot making it outside the dome only to be met by a rival group of barbarians blocking their safe passage.  A pretty good first issue, all in all.  The characters are established and the issues have been set up, as well.  Are the barbarians, good or bad?  Are the domed survivors good or bad?  Exactly where will the returning astronauts end up at?  Well, you’d have to buy the next issue to find out.

Here’s the covers to the final two issues, just because I’m in a good mood: 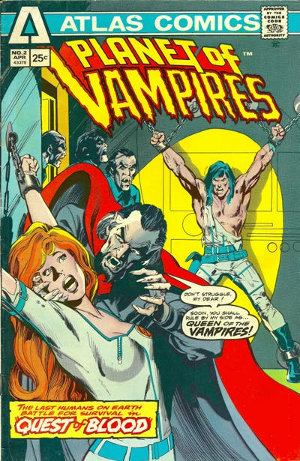 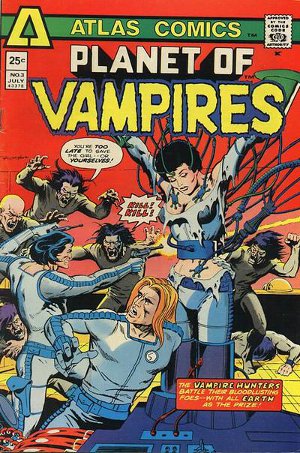 As you can see by the cover to issue number two, it appears that Dracula is loose on the Earth, but that is not the case.  I guess that Neal Adams and Dick Giordano are stretching their imaginations a little too much, as now where in this short lived series does Dracula, or any kind of traditional vampire makes an appearance.

And it’s unfortunate that the characters shown on the third and final cover are miss colored, so that they are not shown as African-American, as they appear in the story itself.  Otherwise it’s a nicely drawn cover by artist, Russ Heath.

The second issues story is entitled; “Quest For Blood!” and is written by John Albano, with the art again by Pat Broderick and Frank McLaughlin.

The story covers the two couples getting back together and fighting off the second band of barbarians, as well as, fending off an attack by the “domers”.  The second issue ends with both of the female astronauts being captured by the fighting men from the domes and they are taken back, leaving Chris and Craig to vow to rescuing them and “killing every last one of them” (meaning the people of the dome)!

Issue three is again written by John Albano, but the artwork, both pencils and inks, are done by Russ Heath.  The story itself is entitled; “The Blood Plague!”.  Chris and Craig go back into the dome to rescue their wives.  The issue is pretty much just them battling the forces of the dome.  Craig finds his wife, Brenda, but she has already had her blood harvested and she is dead.  They continue on until Chris finds the Proctor and he kills him.  Meanwhile Craig has found and rescued, Chris’ wife Elissa.

They make their escape and take refuge in an abandoned zoo.  But before they can find any safety, they are attacked by giant spiders and Elissa is killed.  Wow, three issues and three of the astronauts are killed.  I guess it was a good thing that the series ended with this issue with Chris and Craig vowing to seek revenge on the vampires.  Did they succeed?  We’ll never know, because Atlas/Seaboard quietly closed up shop. Actually they did manage to publish another eight issues from August to October, but no more Planet of Vampires appeared during these last months.

So are these comics worth collecting?  I say yes, they may not be the greatest comics ever published, but some of them, including Planet of Vampires are worth it.  Others, no so much.  But frankly, with only seventy-two (72) books, it is relatively easy to collect them all.  And of the seventy-two, eleven are them are magazines, so really you’ve only got to collect sixty-one comics.  Though if you decide to do that, I’d also recommend that you pick up issue number one of Thrilling Adventure Stories, as that has a Tiger-Man story, that leads into his own comic book.  Further good news, these comics tend to be cheap and easy to find on eBay.

So thanks for stopping by and be sure to return next week for a new Fabulous Find and again in two weeks for a new RETRO REVIEW.