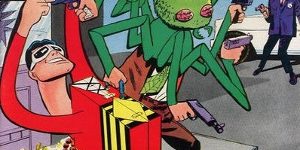 Okay, time for a new RETRO REVIEW, so I’ve dug out my copy of Plastic Man # 2, published by D C Comics, though they were known as National Comics back in the day, when this comic was published.  Oh yeah, for the record, the issue is cover dated; February 1967, but it would have been displayed on the comic book spinner racks in late 1966.

The cover is drawn by Win Mortimer and features, our hero, Plastic Man, battling the Spider.  Take a look: 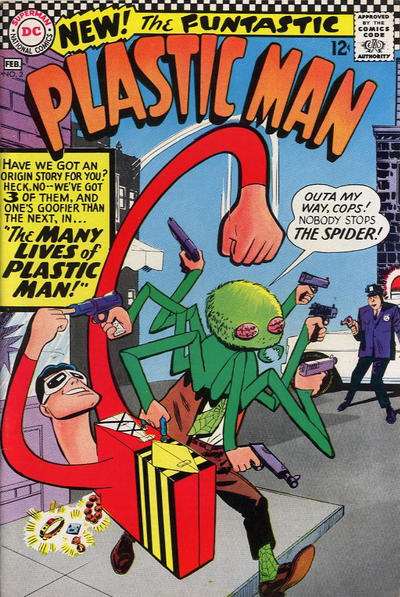 The cover states that the story is entitled; “The Many Lives Of Plastic Man!”, but the actual title to the story is; “The Three Faces of Plastic Man”.  The writer is Arnold Drake.  Both the pencils and the inks were done by cover artist, Win Mortimer.  I suspect that the title came from the 1957 movie, titled; “The Three Faces Of Eve” which starred Joanne Woodward as Eve White.

This issue features the same villain as the first issue; Dr. Dome, along with his daughter, Lynx.  And the story presents three separate possible origins for Plastic Man.  Which is true?  Are any of them true?  By reading this comic book, will you find out?  Nope, no, nah!

The story opens with Plastic Man’s friend, Gordon K. Trueblood closing his pet shop up and rushing with his pet monkey Chi-Chi to the zoo.  Plas was to have meet them but obviously has failed to do so.  That is until Chi-Chi stretches out his head, revealing that he is really Plastic Man and not Chi-Chi.

They fail to get a cab, as the driver thinks Plas is a monkey, but another friend Micheline (Mike) De lute III gives them a lift in her sports car.  Once there, a disguised Dr. Dome gives Plas an ice cream with a bomb inside, but Plas tosses the pistachio favored treat aside and accidentally captures two fleeing payroll robbers!

Dr. Dome tells his daughter, Lynx, that in just one hour Plastic Man will destroy him!  So together they split Lynx into three girls and his sends them back in time to determine when and where Plastic Man got his powers.  The problem is that the people that might know Plastic Man’s secrets tell the three Lynxs’ three different origin stories that took place in three different locations.  The first story reveals that Plastic Man was once a crook that went by the name of Eel O’Brian and he received his powers while battling the cover villain, the Spider, by falling into a vat of nutty putty!

The second possible origin story involves a gypsy fiddler, really a disguised, un-named Railroad Detective, squaring off against the villain, the Japanese Beetle, and Plas received his powers in a combination of milk and an acid bath. And finally the third possible origin has Plas as an unusually strong hick who receives his powers while fighting against the villain, the Frog.  Possibly, Plas received his strength from eating his employers yogurt and then receives his powers from an injection of same yogurt.

I would hope by now, everyone reading this column knows if one of the above possible origins is a true origin or not, but I don’t want to spoil anyone’s enjoyment, so if you don’t know, you might want to catch up on your Plastic Man lore by checking out this short lives series from DC.  It only made it to issue ten and was cancelled in 1968.  Though DC did bring back Plas for another ten issue run, starting with issue eleven and running through issue 20 during 1976 and 1977.

I’ve actually own more of those issues than I do this sixties run.  I’ve only got three of the ten sixties issues, while I own seven of the seventies issues.  So if you want more Plastic Man RETRO REVIEWs, then please let me know by leaving a comment.

And that wraps things yup for this week’s column, but I’ll be back again next week with a new Fabulous Find!  Hope you see you then …