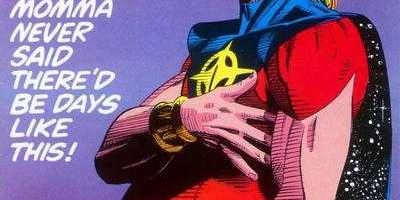 This review is actually covering issue #s 28 and 29 of Marvel Comics,Quasar, The Cosmic Avenger, but it’s the cover of # 29 I have chosen to show here.  These books came out, cover dated November and December 1991.  Quasar was a lower eshelon character in the Marvel Universe that had a small following and his comic actually ran for 60 issues.  The book really picked up steam with the advent of a new penciller, Greg Capullo, who made his debut with Quasar # 16, though please don’t hold me to that.  At that time the character was tied into The Avengers, as well as, Warlock and Captain Marvel comics, etc.

This story features the character, Her, later known as Kismet, the second being created by the Enclave, in their Citadel of Science (Otherwise known as The Beehive).  Like Him, who later become Warlock, Her rebelled against her creators, and though male “at birth” incubated itself in a cocoon, much like Him/Warlock, and when she emerged, she was her familiar blond-haired, golden-skinned female form.

In these two issues, Her is seeking a mate.  She considers the various X-Men, but she determines them too unstable.  Wonder Man is given consideration, as is Hercules, Hyperion, Doc Samson, “the Forgotten One (also known as the Avenger Gilgamesh), and Quasar.  Then enters The Jack of Hearts, seemingly under control of Moondragon, who is also looking for a suitable mate for herself.  And it seems that Moondragon thinks she has first dibs on our man, Quasar!  A typical Marvel slugfest ensues and even Captain America and the Eternal, Ikaris, make cameo appearances.

Then the fun begins, as we get to see a knock down drag out girl fight between Her and Moondragon over who gets Quasar!  There are punches, kicks, a mind blast from Moondragon, and the expected hair pulling, as well!  And while the ladies fight, what are the guys doing?  The guys are just standing around and talking, totally unaware of the battle for the right to mate with Quasar.

Eventually Quasar and The Jack of Hearts throw down and the reader even gets to see a bit of Hercules versus The Forgotten One, but these battles clearly take the back seat to the main bout between Her and Moondragon.

Quasar finally breaks up the girls and flies off with Her, much to the chagrin of Moondragon, who screams; “You choose Her .. over me?”  And because of this Moondragon renounces Quasar as a possible mate saying; “As ideal for me as you are, you are simply not ready for a love as perfect as mine!”

Quasar is then able to change Her’s mind about becoming a mother, convincing her that it was the Enclave’s programing that was motivating her decision and not her own and that she should “experience life!  Explore all of her options” etc!

At the end of issue # 29, Her decides to stay on Earth as the companion to Quasar, in her words; “I will make you an ideal companion and if I do decide it’s time to mother a new race, I’ll be close by the man I want to be the father!” 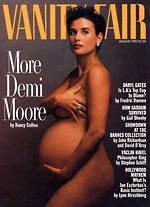 The cover that started the madness!

Not your typical super-hero comic book, to say the least.  And the fact the the cover to issue # 29, cover dated December 1991, must have hit the stands only a couple of weeks after the famous/infamous Vanity Fair cover with a very naked and very pregnant, Demi Moore, in the same pose (that issue was cover dated August of 1991).  Since then, that pose has been copied and parodied quite a number of times.  But the Annie Leibovitz cover truly was a first, and Marvel Comic’s Quasar a very fast second!  And it didn’t cause nearly the outcry that the Naked Gun movie poster parody caused a few years later, with Leslie Neilson shown pregnant in the smae pose.  In fact, I believe the movie studio was sued by Leibovitz.  I never heard of any outcry following the Marvel Quasar cover!

I give these two issues, 2 and a half legion flight rings out of five.  An entertaining story by Mark Gruenwald with nice early Greg Capullo artwork!  Worth your comic dollars in my opinion!