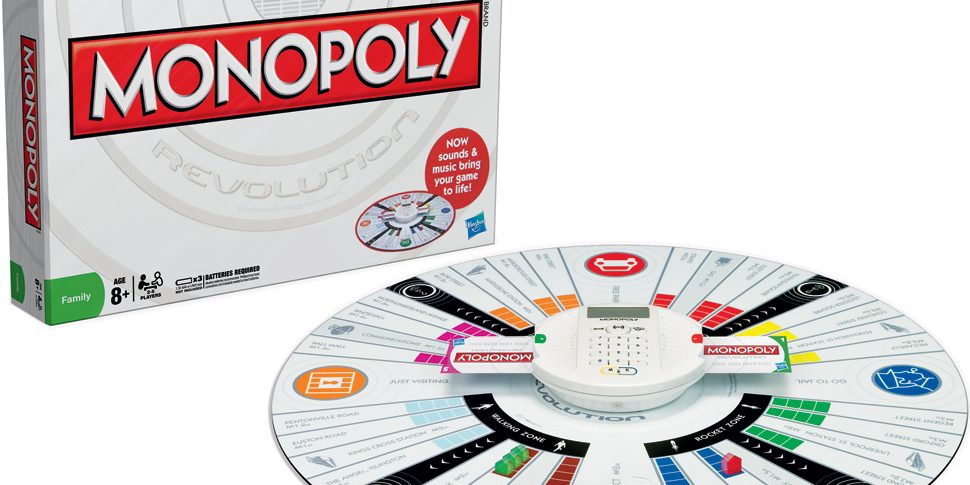 Coming this fall is a revolution in the long standing Monopoly world.  That is when Hasbro Games is a planning to release a brand new Monopoly game; called Monopoly: Revolution Edition which features a circular board.

In honor of Monopoly’s 75th Anniversary, Hasbro is releasing Monopoly: Revolution Edition! What makes it new, you ask?  Well how about a circular board, plastic pieces and an “electronic game pod” that plays music and keeps track of the money for all the players.  So it’s goodbye paper currency, and hello “electronic game pod”!

The “electronic game pod” will act as the banker (so no more cheating, if that’s how you kept your winning streak going), and the “pod” will also play sounds like the rattle of a jail door closing, as well as, songs both current (Rihanna’s “Umbrella“, Daniel Powter’s “Bad Day“) and classic (Elton John’s “Rocket Man“) according to materials provided by Hasbro.

But if this going to upset you to much, sources say that the regular edition of Monopoly will still be sold.  So there should not be a repeat of the “new Coke” fiasco!

Monopoly fans already have a lot of choices to make.  Those desperate to ditch the paper money can already pick up; Monopoly Electronic Banking Edition.  Then there are the numerous branded versions, such as,Nintendo Monopoly, Monopoly Clone Wars (as in Star Wars, just in case you have been living in a cave in the jungle the last thirty years).  Heck there are even Marvel and DC Comic versions of Monopoly out there for your pleasure, plus games based on any number of college and professional sports teams!  And there is also theMonopoly video game available for the Sony Playstation 3, if you prefer your games on video, rather than on a board!

Still, a quick perusal of the many Monopoly versions available, shows that the most revolutionary thing about this new edition is clearly the round board.  Look at the photo, it just looks like a totally different game!

Monopoly: Revolution Edition will be available this fall for a suggested retail price of around $ 34.99, and will be available at Back to the Past Comics!  I envision a lot of these under next year’s Christmas trees!