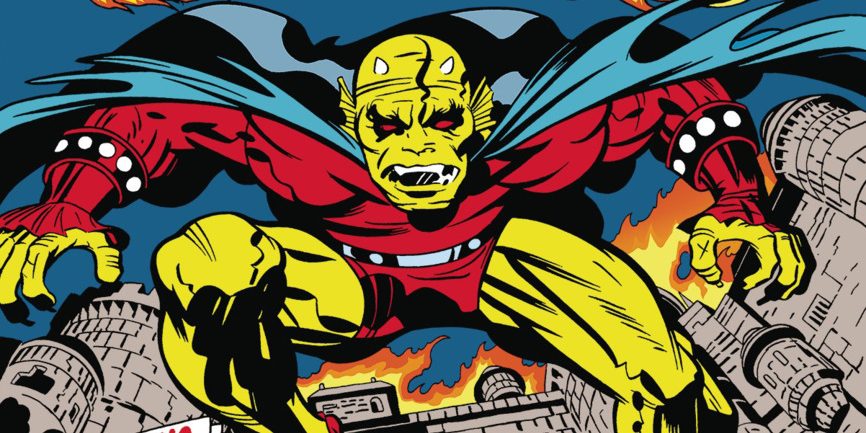 Cover dated September 1972, DC Comics presented to the world Jack Kirby’s next original creation, The Demon, or as the cover touted: “Jack Kirby’s Startling New Epic”!  Into his second year at DC, Jack’s fourth world series, encompassing The New Gods, The Forever People, Mister Miracle and Jimmy Olson were losing sales and readers quickly and therefore the powers that be at DC summarily cancelled the books.  Though Mister Miracle limped along for a while longer with a change of focus away from the New Gods and more to earth bound adventures.

So Jack was asked to come up with new concepts for new books.  He responded with The Demon, as well as, Kamandi, The Last Boy on Earth.  But I’m focusing on his story of the end days of Camelot and Merlin’s creature, the Demon this time out.

Jack’s story begins with Merlin and his “Eternity Book” in Camelot besieged by the massed forces of the evil sorceress, Morgaine Le Fey and as Jack put it; “It was a time when great powers clashed on Earth and beyond – The Fates Were Bringing An Age To A Close!!!”  Clearly, the forces or Camelot were losing the battle even with Merlin’s Demon fighting on their side.

Merlin calls the Demon to his side and entrusts him with his “Eternity Book” and as Camelot falls Merlin’s sorcery transforms his Demon into a man, who simply walks away, “Never to be seen again!”  Well obviously not, as then we wouldn’t have a story.

The second chapter begins in the present, with Jason Blood, Demonologist, who has tracked down a mysterious author who knows about demons, as Jason’s dreams are being haunted by a demon.  Blood is attacked by the author, who reveals himself to be a true sorcerer, in the employ of Morgaine Le Fey.  Blood is captured and brought before the sorcereress, who has plans for Blood, which will lead her to Merlin, who has been in hiding all these years.

Blood wakes up to find himself outside an abandoned house, which an hour ago was the home of said author!  The scene then shifts to Central Europe and Castle Branek for a single page, where we are introduced to a one-armed inspector, right out of a Hammer Horror Movie, and a stone Golum coming to life.  Then we jump right back to Jason Blood’s home where we are introduced to the supporting cast of Harry Mathews, Glenda Mark, and Randu, as well as Randu’s wife and Harry’s friend Mona.

The gathering is interrupted by the delivery of a message, hand delivered by the stone Golum, from the one page cut-away earlier!  The message “invites” Blood to Castle Branek and reads; “Yarva! Etrigan! Daemonicus!” or “I summon the Demon, Etrigan!”  Jason Blood decides to accept the summons and again the scene shifts to Central Europe and Blood entering the Castle and following a “voice” underground to a crypt covered by mystic symbols and an inscription; “Change! Change, O’ Form of Man! Release the might from fleshy mire!  Boil the blood in heart of fire! Gone! Gone! the form of man!  Rise, the Demon Etrigan!!”

And with the incantation completed, Jason Blood is gone and in his place stands The Demon!  And as the first issue comes to a close, Morgaine Le Fey and her evil hordes appear, setting up the conflict about to begin, but not until issue number two!

Not a bad first issue and a beginning to a new series!  Jack Kirby’s art is well done and the story comprehensible.  He’s introduced the main characters, and their antagonists and left the reader wanting more!

I give this comic a rating of three out of five Legion Flight Rings!