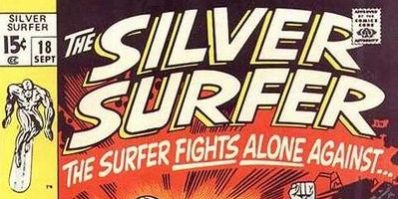 Hey ho, ho hey!  I’m back this week with a brand spanking new RETRO REVIEW.  Sorry about last couple of weeks of not being able to do new columns, but I was moving and you can image how much stuff I had to move!  But I’m back now and this week I’m looking at Silver Surfer # 18 from Marvel Comics.  The cover was drawn, both pencils and inks, by Herb Trimpe, possibly from a layout provided by Marie Severin.  I’m not sure and neither are the experts for that matter.

Here is the cover in question: 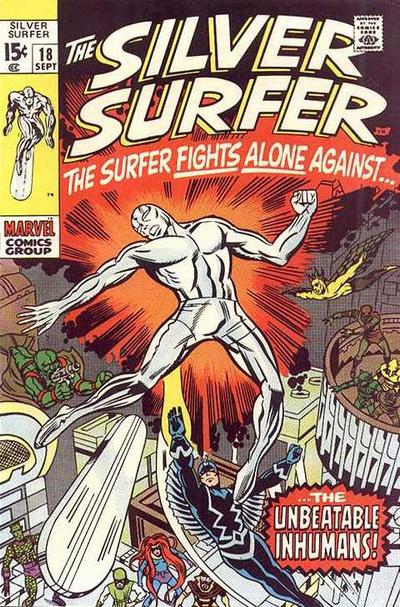 The story is entitled; “To Smash The Inhumans!” and it was written by, or at least the dialogue (words) was provided by Stan Lee, with the pencil art by Jack Kirby and the inks by cover artist Herb Trimpe.  As most of my readers know Stan Lee loved the Silver Surfer and would let no one else write his adventures.  For the first seventeen issues Lee’s prefered penciller was John Buscema.  But sales were slipping, so for issue # 17, Big John and the King swapped books, with the Surfer’s creator, Kirby, doing this issue and John did a Thor in place of Jack.  Alas, the book could not be saved and this was the final issue of the SIlver Surfer’s Silver Age run!

But back to the comic; the book opens with a great Jack Kirby splash page of the Surfer swooping in directly towards the reader.  He is being attacked by three strange characters, a flying man, a centaur and what looks to be some sort of lion man.  These are Inhumans, who each have a different and unique power set.

Over the next couple of pages we find out their names, as well.  The flying man is Aireo, the centaur is Stallior and the last is unnamed.  As the Surfer makes short work of them, they are joined by a fourth Inhuman, a tree man named Timberious.  During this battle, the reader finds out these Inhumans fight with and for the leader of the Inhumans, Black Bolt’s mad brother, Maximus.

The four Inhumans, defeated by the Surfer flee back to Maximus and the Silver Surfer flies on towards the Great Rufuge.  As the Surfer soars overhead, he is again attacked, this time by Medusa, Karnak.  Surprisingly, the Surfer is rendered unconscious, and he is brought before Black Bolt.  The Surfer revives and immediately attacks Triton and Gorgon, with a little help from Medusa.

It is at this moment that Maximus and his troops attack the palace, the Royal Inhumans break off their tussle with the Silver Surfer and defend the palace against Maximus.  Stan and Jack throw us a shot of humor, as Lockjaw, the Inhuman’s teleporting dog holds the Surfers board in his mouth and won’t let go.  They didn’t name him Lockjaw without a good reason!  It takes a blast of the Surfer’s cosmic force to regain his board.  And no, Lockjaw was not hurt in this tug of war game between him and the Surfer!

The Surfer flies from the Royal Palace and is fired upon by Maximus’ forces.  Black Bolt attempts to fly up to the Surfer, but the Surfer believes the King is planning on resuming the attack, so he pours on the power cosmic and races to freedom, away from the Great Refuge.

The comic ends with three panels of the Surfer bemoaning the madness of humans and his soul is filled with rage! The final page is another full page splash of just the Surfer’s face and him stating that; “since a fiendish fate has trapped me here — with a hostile race in a nightmare world … let mankind beware!  From this time forth — the Surfer will be the deadliest one of all!”

Woah, looks like the next issue might show us a surfer unlike any we had ever seen before.  The next issue blurb says … “Next: The Savagely Sensational New Silver Surfer!”  But as I said at the beginning of this post, there was not a next issue, the Silver Surfer’s first comic book series ended right there.

Where would have Jack taken the book if it had not been cancelled?  We will never know!  But the Surfer’s tales were not over, not be far.  He just started guest starring in various Marvel books before joining up with the Defenders and eventually getting a second chance in his own comic book.  But those are tales for another day.