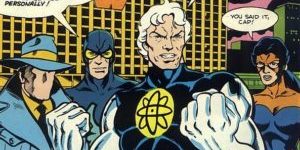 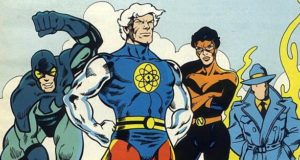 Welcome back to Strange Times & Places, where today we’re reviewing two comics that are rendered effectively an elseworld by the vagaries of copyrights and licensing – Americomics #3 and Americomics Special #1!

These stories were intended as continuations of the original Charlton Comics universe, originally composed for the second volume of Charlton Bullseye, but ended up effectively one-shots due to DC’s outright purchase of the characters. As such, they exist in Comic Book Limbo – not part of the Charlton AKA Pre-Crisis Earth 4 continuity, not part of AC Comics continuity, and certainly not relevant to anything DC’s done with the characters. 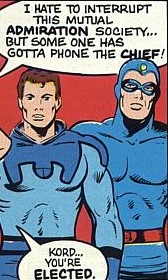 Americomics Special #1: The Sentinels of Justice (Captain Atom, Blue Beetle II, Nightshade, & The Question) band together to battle The Manipulator and his minions The Madmen, The Fiery Icer, Iron Arms, and The Banshee!

Americomics #3: The first story is a pretty nifty-if-bland yarn, but the second feature (“The Blue Beetle to Live Again”) is really interesting. It sees two gods resurrect Dan Garrett, the original Blue Beetle, for the second time! In this continuity, he would have been both the vitamin-powered Golden Age mystery man AND the Silver Age magical superhero…with the addition of being a Copper Age super soldier.