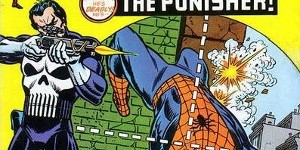 For this week’s RETRO REVIEW, I’ve visited the Marvel Comics wing of my vault and come out with the Amazing Spider-Man # 129.  This book is cover dated February 1974 and features the introduction and first appearance of the Punisher!  Yep, that’s right, this is where it all began for all you Punisher fans out there.  He was created as a throw-away villain to face off against Spider-Man, but obviously he grew into something completely different, as Monty Python would say.

So let’s delve right in.  The comic cover itself is pencilled by the great Gil Kane, with the inks by the alos great John Romita Sr.  You don’t get a much better combo, do you? And I won’t make you wait any longer to peruse it, here ya go: 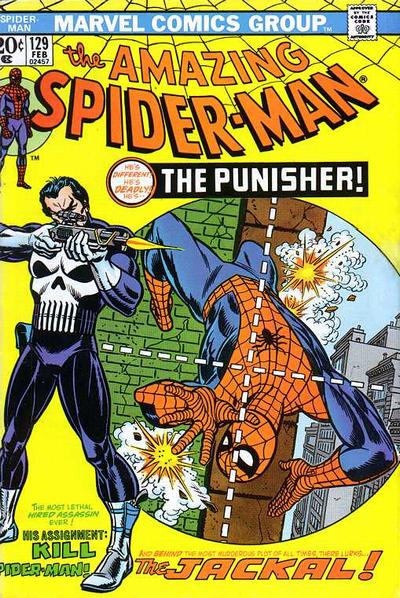 The comic story itself is entitled; “The Punisher Strikes Twice!” and it is written by Gerry Conway.  The interior artwork is by; Ross Andru, who provides the pencil art for the comic, with the inks provided by two gentlemen; Frank Giacoia and Dave Hunt.

The action begins right on the first splash page, which shows the Punisher blowing up a plaster statue of Spider-Man with a “concussion rifle” while the Spider-Man villain, the Jackal looks on.  It appears that the Jackal has convinced the Punisher that Spider-Man is bad and deserves killing.  This seems to be an after effect of Gwen Stacy’s death in the Amazing Spider-Man # 121 from six months before.  Spider-Man is taking the blame, rather than the actual culprit, the Green Goblin.

The scene then switches to a bored Spider-Man swinging over the New York rooftops on patrol.  Just when he’s ready to pack things in, he spots a bank robbery in progress.  I found it interesting that Conaway had one of the bank robbers say; “look it’s that Spider-Man character we heard about in Detroit”.  So obviously this group of robbers have come from Detroit to make their fortune in the Big Apple.  Being from the south eastern part of Michigan I found this amusing.

Spider-Man quickly wraps up the robbers and leaves them webbed up and hanging from a light pole for the police to collect.  Of course, Spider-Man has also set up his camera to capture the action, so that he can sell the pictures to J. Jonah Jameson at the Daily Bugle. Spider-Man changes into his Peter Parker duds.  Andru draws a series of strange panels, where Peter smiles rather grotesquely then he turns away thinking; “Aw, the heck with it.  Why does Peter Parker always have to be cheerful anyway?”  Here it is: 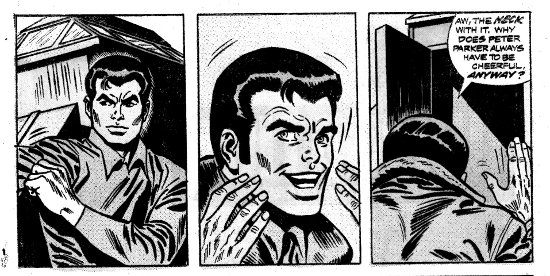 I don’t know about you, but I find these panels rather creepy.  But moving on …

Peter Parker goes to the Daily Bugle, where he stops and visits with Jameson’s secretary, Betty Brant.  She invites him to a party, then he goes in to see Jameson.  Editor Robbie Robertson is in with JJJ and Peter gives them his spiel about having pictures of Spider-Man breaking up the bank robbery.  But JJJ is in no mood for Spider-Man pictures.  He shows Peter the front page of a rival paper, which has a picture of the Punisher and the headline, which reads; “Punisher starts war against Mob!”.  Jameson yells at Peter and sends him out to get pictures of the Punisher for the Bugle.

As Peter swings away from the Bugle, in his Spider-Man identity, the Punisher strikes.  Only Peter’s “spider-sense” saves him from the Punisher’s concussion rifle fire.  Spider-Man goes after the Punisher, who seems to be running away, making his escape.  But no, the Punisher is simply running to where he had hidden a different specialized gun.  He grabs it and spins around firing it at Spider-Man at point blank range.  This gun fires a titanium alloy wire, which wraps up Spidey.  The Punisher gives a bit of a soliloquy, saying; “Spider-Man’s kind is all alike, using whatever means to get control of the public … drugs, gambling, loan-sharking. etc.”  As the Punisher goes on, Spider-Man busts the wires which have trapped him and belts the Punisher a good one.  As Spider-Man and the Punisher fight hand to hand, the Jackal makes an appearance and strikes, driving his claws deep into the wall-crawler.

Apparently his claws are negatively charged with electric prods.  I wonder why they are not positively charged?  I guess it just sounds better using the word negatively!  Spider-Man negatively effected by the Jackals attack manages to barely get away, but when he recovers he goes back to the scene of the fight and finds a clue, as he finds one of the Punisher’s guns, which just so happens to be stamped with the name of the place where the Punisher got the gun.

Peter returns to his apartment and rests up, actually sewing up his torn costume where the Jackal and clawed him.  It’s at this point that Conway cuts away and shows us a page updating the readers on Mary Jane Watson and Harry Osborn situation and setting up a future storyline.

Then it’s back to the Jackal’s liar, where the Punisher is striking out at the Jackal, telling him that he does not want to become a “common murderer”, but the Jackal soothes the Punisher and convinces him to strike again at Spider-Man  Which he does at the armory, where Spider-Man has gone to try to track the Punisher.  So just like the titles says, the Punisher strikes twice, this time using his hands and feet before resorting to a handgun.

Not a bad introduction to a character.  Conway shows that the Punisher is not all bad, but was simply set up by a far worse villain.  In fact, the Punisher proved popular with the readers and just a short six months later, the Punisher returned in Amazing Spider-Man issues # 134 & #135.  But that’s a story for another RETRO REVIEW.

Thanks for stopping by and be sure to come back next week for a new Fabulous Find and again in two weeks for the next RETRO REVIEW.

Take care out there!