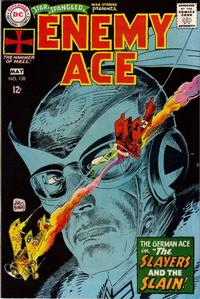 Yes, it is almost the fourth of July, the birthday of the United States of America, but I’m featuring a slightly different hero, no not Superman, who is American as mom’s apple pie, well he was until that certain recent story, where he renounces his U. S. citizenship.  But already D C Comics is back pedaling on that story!  Nor is it about Marvel Comic’s Captain America, who wears a symbolic American flag proudly, as his costume and represents America in all things!

Nope, I’m choosing to feature in this week’s RETRO REVIEW, the German World War I hero, Hans von Hammer, otherwise known as the Enemy Ace. The issue I am reviewing is Star Spangled War Stories # 138, cover dated May 1968.  He made his first appearance, three years earlier, in Our Army At War # 151, cover dated February 1965.  He then appeared in Our Army At War # 153 & 155, before moving over to Showcase #s 57 & 58.  Then it was almost three years before he returned in this issue I’m reviewing.

This issue is written by Bob Kanigher and drawn by Joe Kubert, as had the first five appearances.  The story is entitled; “The Slayer And The Slain“.  It has a wonderful cover featuring the head of the Enemy Ace taking up most of the cover, with two planes in deadly combat, crossing from upper right to bottom left, all on a black background.  It’s a beauty!

The story itself opens with von Hammer in a dogfight.  Him in his crimson Fokker DR-1 Triplane and his opponent in a British Hanriot.  Even in the midst of the battle, the Enemy Ace spots another plane, a British Martinsyde Bomber, and he  breaks off to send it and it’s pilot to a fiery death.  He succeeds in downing the bomber only to be wounded hislef by the pilot of the Hanriot, who has gotten the upper hand on von Hammer, while his attention was turned toward the other plane.  von Hammer is wounded but manages to again win the dogfight and send the British pilot and plane down in flames!

von Hammer then turns toward his own field only to be met by a third plane, this time a all black Spad, piloted by The Hangman (the French Hangman is in actually Count Andre De Sevigne)!  As they pass the Hangman indicates that his guns are empty and von Hammer allows him to safely pass, acknowledging that the “sky is cruel enough.  I don’t have to add to it by shooting down an unarmed man.”  And thinking that he will one day face off against the Hangman when the odds will be more equal!  He may live to regret that decision, but that is a tale that will follow in the next couple of issues.

The Enemy Ace lands and walks back to the hanger, where he collapses and it is discovered that he has been wounded.  His wound is treated by German doctors and von Hammer recuperates, but when he is around other patients, they all fall silent in his presence.  von Hammer considers the price he has had to pay to become a “killing machine”.  He has a moment with his lovely nurse, but she is “chilled” by his kiss and runs away, leaving him to think that he “has the touch of death” on the ground, as well as, in the air!

von Hammer is soon back in the air, where he witnesses one of his fellow pilots being brought down by the Frenchman, The Hangman.  He quickly turns on the Hangman, but is almost gunned down himself, though he is able to continue flying and manages to explode two French balloons loaded with men with machine guns.  In the fiery explosions the two fighters are separated and both manage to escape to fight another day.  In fact the next two issues will continue their air fights until a final end comes to one of them!

Yes, an odd comic to review at the time of the fourth of July, but the German, Hans von Hammer proves to be a man of great honor and worthy of being labeled a hero, even if it is for the county of Germany, which was at war with the rest of Europe during these tales.  I give this comic four (4) out of five (5) Legion Flight Rings!  And hopefully I’ve guessed correctly that my fellow Back To The Past compatriots will feature a more traditional look at America and it’s heroes for the fourth of July! 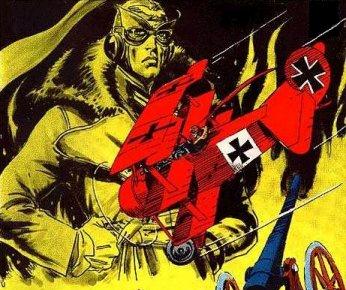