I wanted to rejoice when that glass office building in Chicago was destroyed.

Yeah. I’ll explain. Sit back and listen ye to a tale of hope, healing, and the American spirit. That might sound a little deep for a pop culture column, but hey; it’s Independence Day and since I can’t set off any fireworks here to commemorate the 235th birthday of our nation, I’ll testify to her strength of character instead.

No one needs me to tell you that we are coming up on the 10th anniversary of the 9/11 attacks. And no one needs a reminder of what the mood in this country was like in the years following those attacks. The images of the burning towers and the aftermath of their destruction were painful to watch, and the constant barrage of such images has forever made it impossible to put them far out of our minds. The vast majority of us can make no claim of a first-degree connection to any of the victims; we didn’t know anything about the people who worked in those towers or were flying on those planes; we couldn’t put any human faces on the tragedy so instead we symbolized it with images from afar: two proud, shiny towers glistening in the morning sun, even as endless clouds of black smoke poured from their wounds.

We quickly realized in the days that followed that it wasn’t only these images in their ravaged state that were painful to see; we also felt twinges of loss and sadness when we saw past images of these iconic buildings, when they still stood tall, proud and seemingly indestructible in a time where the possibility of such an atrocity had barely even crossed our minds. The feelings were not unlike looking at the pictures of a loved one hanging on the wall; a loved one who was taken from us unexpectedly. And oftentimes, if looking at such a picture or image instills feelings of sadness, we can think of only one way to deal with this sadness. 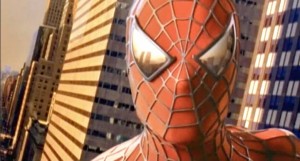 Prior to 9/11, there was rarely a film or TV episode featuring the New York skyline that didn’t show the World Trade Center towers. But, either out of concerns over viewer sensitivity, or perhaps merely concerns that images of the towers would be a distraction to viewers, the entertainment world’s answer to the above was often to excise any such images. Films in production (2002’s Spider-Man, for example) were altered before release. New TV show episodes featuring stock views of the skyline had these shots edited or cut. Syndicated shows and movies that had already been rerun prior to 9/11 were now newly modified to trim any scenes showing the buildings.

It felt like someone was putting that loved one’s picture face down on the mantle. It felt wrong. But as the years passed, and we became accustomed to a forever-altered skyline, we adjusted as we do to any loss and tried to move on. In a post-9/11 entertainment world, images of the towers were henceforth rarely if ever seen in any pre-9/11 TV series or film. 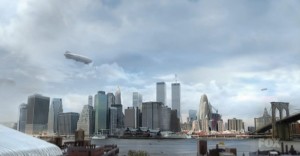 It was the familiar buildings that shocked viewers as much as the stranger ones in Fringe's alternate version of NYC.

Until two years ago, that is, when the first season finale of Fox’s Fringe not only showed the twin towers, but used them as a setting for the episode’s final scene. Of course, within the context of the show, as viewers already know, this wasn’t “our” World Trade Center; it was the WTC of a parallel world, a world where the buildings were not destroyed in the 9/11 attacks. But that’s all semantics; it was the WTC, regardless of whatever alternate universe they might exist in, and eight years after the attacks, their appearance was quite a shock.

Of course, it was the season finale, so a shock ending was expected, even if we didn’t know what to expect. To me, though, the shock wasn’t the revelation that there was an alternate version of Earth and that the WTC was used to symbolize that; it was that the producers opted to use the WTC at all, after years of it seeming as though Hollywood was trying to make us believe it never even existed. And it wasn’t just a one-time thing; the show has continued to use the towers as a brilliantly understated indication of which world a particular episode or scene takes place. So, ironically, after years of altering the pre-9/11 NYC skyline to remove the WTC, now we have a creative effort that alters the post-9/11 NYC skyline to include it.

We can look now.

A glass office building is destroyed in Transformers 3. You wouldn't have seen this in a movie 5 years ago.

It was hard to imagine, even just a few years ago, that a movie featuring a large scale attack on the U.S. would ever include the graphic, detailed destruction of another skyscraper. In the first years after 9/11, such a thing was verboten; it would have been considered in poor taste, highly insensitive, and an insult to the memories of those who lost their lives in such a structure. But Transformers 3 makes no apologies for such a scene, nor should it. If anything, it shows that maybe we haven’t just started to heal; perhaps we’re well on our way to being healed. Yes, there was a time where we all tread lightly and avoided such disturbing depictions, and rightly so, out of concern for the victims of 9/11 and their families. Better safe than sorry, but that’s the point; we were and always will be sorry for the loss of the victims, but we no longer have to look away, or try and distance ourselves from what was. Moving on does not mean we forgot. Because we will never forget.

235 years seems like a long time. The mere decade since 9/11 has seemed like seemed like an eternity, for all the time it’s taken for our wounds to heal. But I will tell you this: amongst the lifespan of nations, America is but a youngster; a young radiant beauty who’s youthful resilience gives her the power to recover like no other. She might take a severe blow, or several, but her history; relatively brief as it is; shows that, even as those who struck her down are meeting with a well-deserved fate that will span eternity, she will get up, stand tall again, and forever reign as America the Beautiful.

So we should rejoice; like grass and saplings spouting from the blackened ground of a charred forest, the signs of healing are there. Even in our pop culture world.