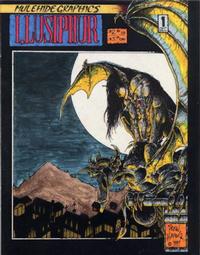 Welcome to this week’s RETRO REVIEW!  This time I’m looking at Sirius Entertainment’s Poison Elves # 1, cover dated June 1995.  It’s a comic book that is written and drawn, by its creator, Drew Hayes.  This is the first issue under a new publisher, as Hayes had previous self-published twenty issues under the Mulehide Graphics imprint.  The original comic, was published in a magazine format and appeared under the name I, Lusiphur for seven issues, then Hayes changed the name to Poison Elves with issue # 8.  Both of the series was published in black and white, though Hayes did publish one color issue during the 90’s, as the Poison Elves Color Special.

This issue starts a new storyline and it was not necessary to have read the first twenty issues of the book to know what was going on, but Sirius eventually reprinted those first twenty issues in four (4) trade paperback editions for the completest, like me, as the original Mulehide editions are hard to come by and a tad on the expensive side!

The first issue uses a two page written prologue to give the reader everything they need to know to pick up the story of Lusiphur in the year 1515, in a world called Amrahly’nn.  Lusiphur is an elf.  An elf in retirement.  Or that’s been the case for a year.  Things are about to change!

Luse is back home in Mandratha, he has unloaded from a fishing boat, where he has been working for some time.  He heads home to find an eviction notice on his door and the remains of a major party in his house.  He confronts the woman he’s been living with for the last six months, a certain Beth, who may be of questionable morals, if her state of undress and the number of party-goers is any indication, all male, I might add. 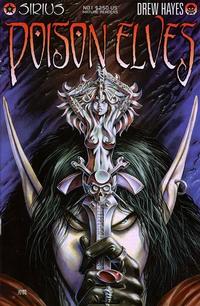 During their “discussion” of ‘WTF’ has been going on during Luse’s absence, a dwarf assassin fires a poison tipped crossbow bolt through the window, narrowly missing Lusiphur!  He crashes in and battles Luce!  When Luse gains the upper hand, the dwarf grabs Beth and uses her as a hostage.  Beth goads Luce to surrender, and he shoots her!  Yep, that’s right he shoots her!  Not the dwarf, but her!  Already you can see this is not a comic for young kids, or your parents either, for that matter!

The dwarf realizes who he’s dealing with and flees the house in a panic, shot and badly wounded.  The now awakened party-guests now confront Lusiphur and he kills them all, as well.  Luce then begins tracking the wounded dwarf.  He eventually tracks him down to an abandoned church, where the dwarf is pleading for someone to let him in.  Luce thinks he’s crazy, as the church is clearly destroyed and empty.

But, that is an illusion, as a tear in the fabric of the universe occurs and a very whole church, or Sanctuary, is revealed.  The dwarf flees into the rift and Luce follows close on his heels.  He is met on the other side by Morachi, “King of the Thieves”, his brother Talon, and a large number of other elves, all part of an assassin guild.  Not to mention the female assassin, Cassandra.   But that’s a tale for another issue or two and for another time.

This first issue did a great job of introducing us to Lusiphur Malache and his world.  It told a fun, but bloody, story involving elves unlike any I had ever seen to this point and made me want to continue reading as soon as I could get my hands on the next issue, therefore I give it four (4) out of five (5) Legion Flight Rings!  The art may not be for everyone, but it “spoke” to me!

The Sirius series lasted seventy-nine (79) issues, plus the color special I mentioned above.  Unfortunately the creator, Drew Hayes suffered from numerous health problems, which hampered his ability to create comics.   He had been hospitalized a number of times during the run of the book and died at the young age of thirty-seven (37) from a heart attack while suffering from pneumonia.  I met him at a Chicago con back in the 90’s and he liked to play the tough guy, but I could tell he was actually a softy, at heart.  He is missed, as is his creation, Poison Elves!