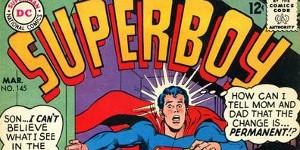 Bonjour, friends, fans and followers and anyone who has just stumbled upon my post.  It’s once again time for a new RETRO REVIEW.  And this week it’s time for the spotlight to shine on DC Comics.  So I’ve pulled out a rather strange example of changing the status quo on a book from the late nineteen-sixties, the comic in question is; Superboy # 145, cover dated March 1968.  It features a cover drawn by the great, Neal Adams, but I really don’t think it’s one of his best.  Of course, that’s just my lowly opinion, as this just might be the favorite Adams’ cover of collector out there.  Take a look: 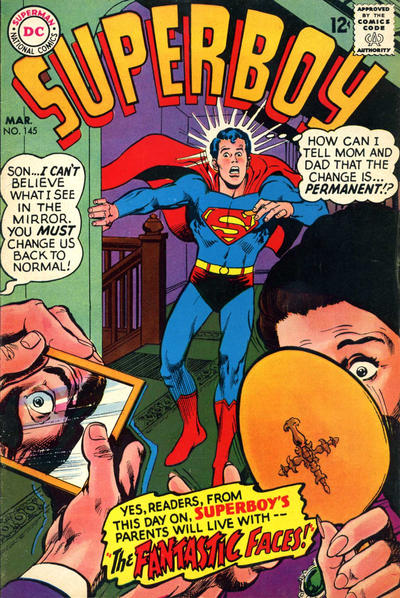 The story is entitled; “The Fantastic Faces” and it is written by Otto Binder.  The pencil art is provided by George Papp and the inks are by Frank Springer.  Though as per usual, in sixties Superman titles, the writer and artists went uncredited.  The splash page shows Superboy holding, facing the reader, two portraits of his adoptive parents, Ma & Pa Kent.  Superboy is saying; “Take a good look, you’ll never see them again!”  Pretty heavy!

Turning quickly to the second page, the reader sees human-like residents on the Planet, Thraxx, watching their version of television.  And what’s the TV showing?  Why, it’s … the “Superboy of Earth!” A proposed new series.  They are asked to write in to the producers telling them what they like and any criticism they might have.  Apparently, all of their viewers love the new show, but they all have the same single criticism.

The scene is then switched to the studio that produces the new show.  The studios are protected behind fences and keep out signs, but they are not the hustling, bustling studio one would expect.  Nope, they aren’t filming a single actor and actress, but are using a “super-space camera” to capture footage of Earth’s Superboy!  And this is what they are showing their audiences.  It’s all the scheme of Jolax and his assistant, Mya.

But now after asking their viewers for suggestions, they find that their audience think that Superboy’s parents are too old.  They can’t identify with Clark, with such older parents.  So Jolax and Mya need to hire younger actors to play Ma & Pa Kent.  The only problem is that Ma & Pa aren’t actors playing a part, they are actually Superboy’s adoptive parents.

Jolax witness a “youth serum” being given to a criminal, so that he can start life over again and raised so he won’t turn to crime.  This gives him an idea, he’ll obtain some of the youth serum.  Then converting his “super-space camera” into a “dimensional teletransporter” (don’t ask, it was the sixties and DC Comics pseudo science, it didn’t have to make sense) and he empties the youth serum into the Kent well.

Of course, Ma Kent makes some lemonade using “fresh, cold well water”, yes, she actually says that, just so the readers can’t misunderstand what is about to happen.  They go to bed and in the morning, they awake, younger!  They ask Clark if he had anything to do with their transformation.  He thinks it may have been caused by a space jewel he brought into the house the day before.

To keep his secret identity a secret, he and his now younger foster parents, take a vacation to get away from Smallville.  They all figured the change would wear off, but soon they discover that Ma & Pa remain young, causing Superboy to wonder if he’ll ever be able to return to Smallville?

The second half of the story shows Clark and his foster parents returning to Smallville, where Ma & Pa are forced to wear masks of their “older’ faces that Superboy has made.  They narrowly avoid being discovered by Lana Lang, and eventually Superboy discovers it is not the space jewel, but a bottle of youth serum that has made his foster parents young again.  Again, how he knew that the empty bottle at the bottom of the well, contained youth serum, we’ll never know, since he only used his x-ray vision and didn’t run any test on the water.

Meanwhile on Thraxx, the public is loving the new Superboy show with younger parents!  Jolax and Mya are the toast of the planet.  But back on Earth, Superboy comes up with a way that his parents can “stay young” without revealing his Superboy identity.  The Kents host an “old-timer” party and invite all their old friends and they are given the youth-serum infused lemonade, while Superboy fakes a mysterious comet passing by.  All their friends turn young also, and everyone believes it was the comet that did the deed.

While back on Thraxx, things go from sweet to sour, as Jolax’s sponsors want to cancel the Superboy show and replace it with a Superman show, where his parents should be old!  Back on Earth, in the final panel of the story, Superboy tells the readers that the youth serum is permanent and that his parents will remain young.  Well, at least until it was decided that they should be old again,  But that’s comic books for ya!

And for you completists out there, there is also a second Superboy story in this issue.  It’s entitled; ” Superboy Meets William Tell” and it is reprinted from the October 1960, Superboy #84.

Please return next week for a new Fabulous Find and then be sure to be back in two weeks for another new RETRO REVIEW!