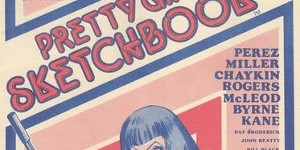 Since this week is a Holiday week, I thought I’d make it easy on myself and present a Fabulous Find that didn’t require a lot of writing on my part and I stumbled upon the perfect find while filing away something else entirely. It’s the 1981 Pretty Girl Sketchbook published, as a one-shot, from Paisley Publications. I don’t know anything at all about Paisley Publications and as far as I know this is the only thing I own from them. I do know it came out in 1981, or at least it’s copyrighted in 1981, as it says so on page one! The comic sized book presents twenty (20) pretty girl pin-ups by eighteen (18) artists.

Now for the easy part, here’s the front cover, as drawn by Frank Miller, the inks were provided by Bill Black: 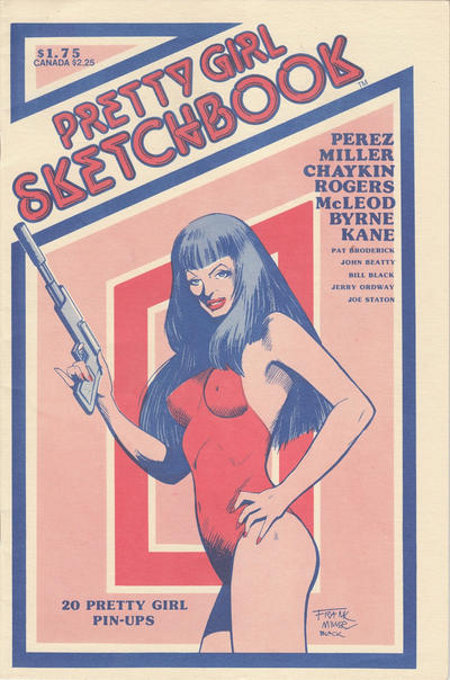 And now the back cover, pencils and inks by Bob McLeod: 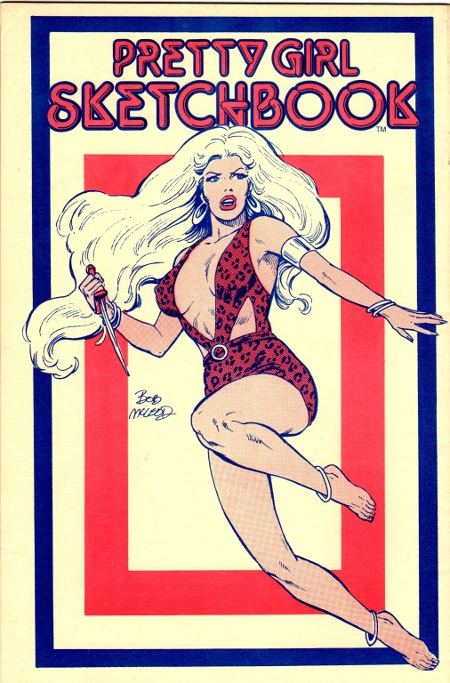 Personally, I think McLeod’s Sheena of the Jungle back cover is a lot better than Frank Miller’s front cover.  I’m not sure if Miller is drawing a known female comic book character, or just a generic girl holding a gun.  I sure can’t identify her by his drawing.  Anyone else?  But obviously Miller is the “bigger name”, so he got the front cover assignment, or at least placement.

Some of the better, at least in my opinion, art from the interior of the book follows: 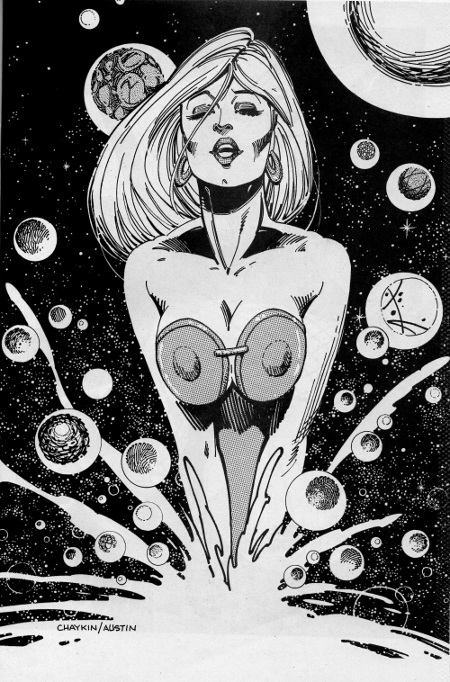 Page 5 drawn by Chaykin and Austin 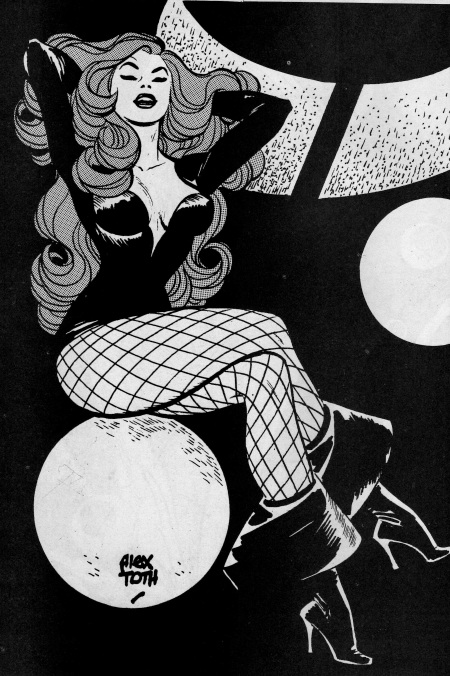 Page six, just might be the best art in the whole sketchbook, but again that’s just my opinion.  Anybody else own this item?  If you do, please share your opinion, as I’d love to hear which drawing you feel is the best.  Next … 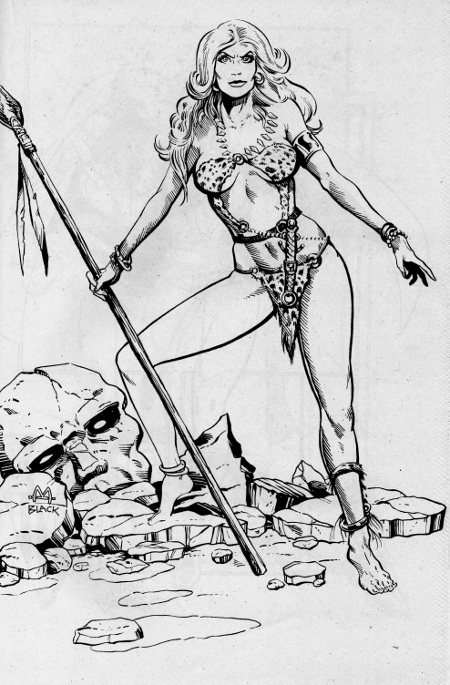 I’m not familiar with this artist, but he does a very nice job on his Sheena, doesn’t he? 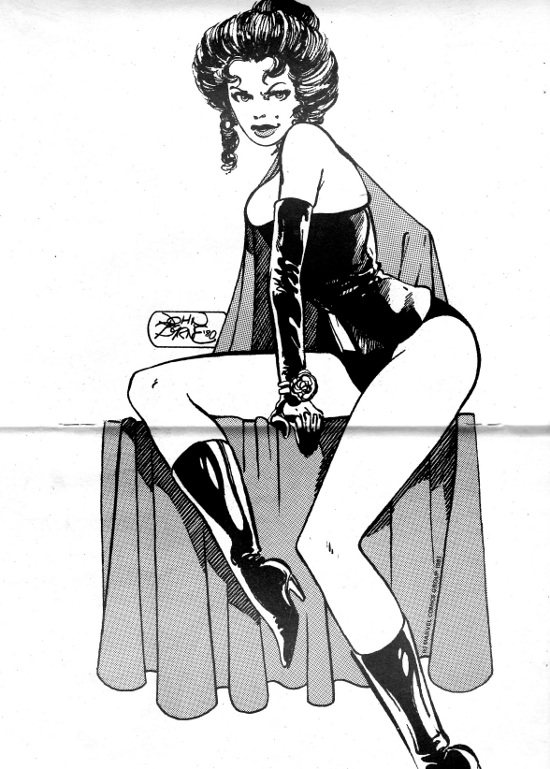 As you might be able to tell by the line/crease through this drawing, it serves as the centerfold of the book and is clearly Marvel Comics‘ Black Queen.  Enjoy all you X-Men fans! 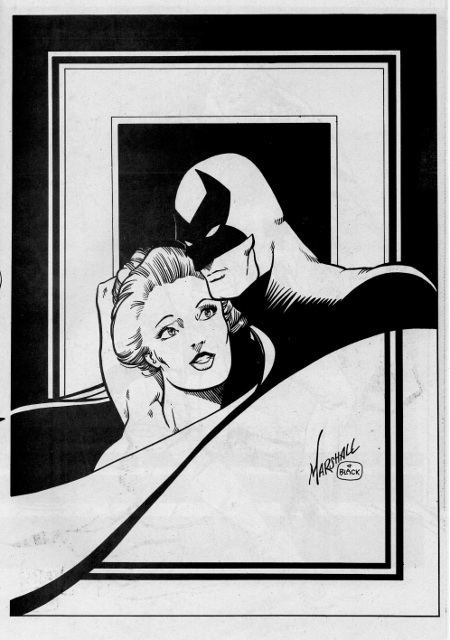 Did Rogers forget to draw in Batman’s ears on his cowl?  Or did Black try to change Batman to a generic costumed hero?  I sure don’t know, but it looks like Rogers pencilled Batman and Silver St. Cloud to me, and then it was changed for some reason. Maybe so they didn’t have to credit DC Comics?  Or maybe DC wouldn’t authorize Batman’s likeness?  But did Marvel authorize the use of their characters?  And Toth was definitely drawing DC’s Black Canary on page six, so what’s the deal?  A mystery, at least to me.

And how about this drawing by by Terry Austin? 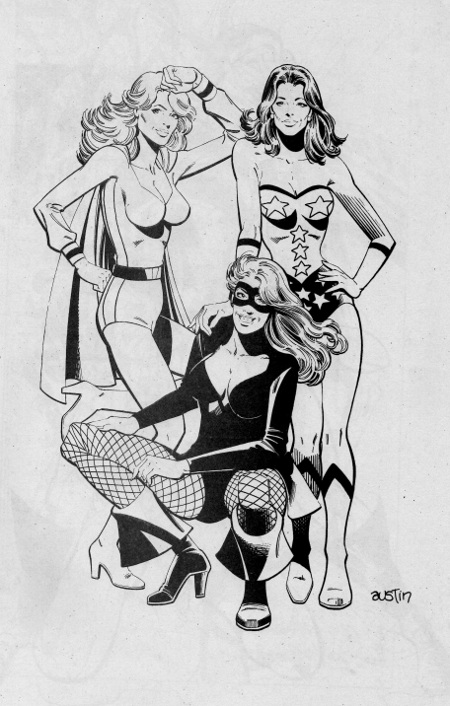 Clearly it’s Wonder Woman, Black Canary and Supergirl, but again their costumes have been changed just a little bit, so I guess that would enable Paisley Publications to argue that they weren’t DC’s characters, if they were sued.

Well, I did a little more writing than I had planned, but that’s okay, I enjoyed sharing this sketchbook from my collection with you.  Hopefully you enjoyed it, as well.  Any comments?  Anyone out there?

Yeah, I know you’re there, even if you don’t comment, so please come back next week for a new RETRO REVIEW and again in two weeks for a new Fabulous Find.  Be seeing you …