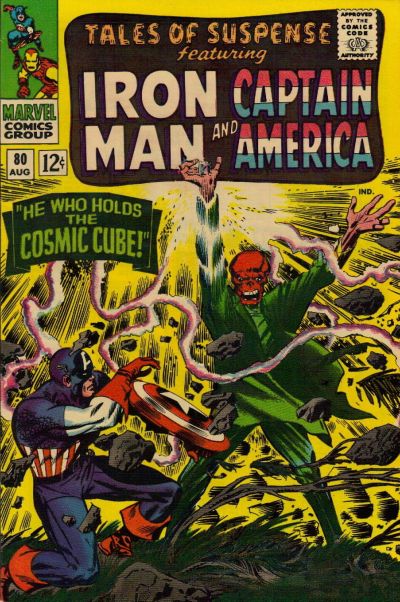 This week’s RETRO REVIEW looks at Marvel Comics’s Tales of Suspense # 79 – 81, at least the Captain America half of these three books!  The books were cover dated July, August and September 1966.  A quick recap of Marvel in the sixties; Marvel was under a strict distribution plan where they were only able to publish 12 of 13 books a month and to maximize the number of character and storylines, they used books like Tales of Suspense and Tales to Astonish to feature two of their characters rather than just one.  Suspense featured Captain America, as well as, Iron Man, while Astonish featured The Hulk and the Sub-Mariner in 1966 in ten page stories.

Tales of Suspense # 79 brings Captain’s World War II foe the Red Skull into the modern Marvel world of 1966 in a story entitled; “The Red Skull Lives!”. It is written by “Smilin” Stan Lee, with pencil art by “Jolly” Jack Kirby and inks by “Frantic” Frank Giacoia.  This team remains the same in the first and third books, but “Dazzling” Don Heck provides the inks for Tales of Suspense # 80.

The lovely artwork to the left, featuring Captain America in battle with the Red Skull, was done by the team of Jack Kirby and Don Heck and graced issue # 80.  Cap’s co-feature star, Iron Man, was featured on issues #s 79 and 81. So I really appreciate this particular cover!

This three issue story line is important in two ways!  As I wrote above, it introduced Captain America’s greatest foe, the Red Skull into the modern Marvel mythos and the story line also introduces the concept of the Cosmic Cube for the first time!  So let’s jump right into things!

Issue # 79 facing foes who only he can see!  A group of costumed assassins appear in the heart of New York City, but apparently, only Cap can see them!  Everyone around him can not see the assassins and begin to think maybe Cap is “losing it”!

The scene shifts to a secret location where two men are gloating over Captain America’s situation.  Suddenly they are called to attention by the Red Skull!  Lee and Kirby then treat the reader to a one page flashback of how the Red Skull survived from his last battle with Captain America where it appeared he had died.  Of course he hadn’t!  And they revealed that the Skull had been trapped by an explosion and he was put into a state of suspended animation via an experimental gas which leaked out in the explosion!

Again an “invisible” assassin is dispatched to kill and innocent and have Cap framed as the killer, but Cap anticipates the attack and comes prepared, wearing a “printed circuit” under the A in his cowl, which jammed any “hypnotic waves in the area!”  Man I just love comic book science, don’t you?

Issue # 80 opens with Captain America rescuing a pilot who’s plane was shot out of the sky.  It turns out the pilot is an A.I.M. scientist who reveals that other A.I.M. scientists are bringing a newly created weapon, something called the Cosmic Cube, to the Red Skull.  Thus Cap learns that his old foe has returned!  The A.I.M. scientist provides Cap with the details of the planned delivery and he rushes to intercept the cube.  Jack draws a great couple of panels, where Cap leaps from a S.H.I.E.L.D. experimental manned missile and onto the A.I.M. aircraft.  How do I know this?  Because it’s conveniently printed right on the danged missile, that’s how!  I love the Silver Age!!!

The pilot ejects from his plane, with Cap hanging on.  They land just offshore of a remote island, where the Red Skull has his secret hideout.  The Skull and Captain America battle hand to hand.  The Red Skull gains the upper hand when he reveals that he is the one that gave the orders that resulted in Bucky’s death back in World War II.  Zemo was operating under the Red Skull’s command!  The Skull overcomes Cap using gas, and gains the Cosmic Cube.  He uses it first to banish the A.I.M. scientist who delivered it to him, to another dimension, thus revealing the power of the cube!  And that brings issue # 80 to a close.

Issue # 81, is a great ten page, full issue, battle between Captain America and the Red Skull.  First one, then the other gains the upper hand and we see the Skull learning to use the power of the Cosmic Cube!  He eventually uses it to clothe himself in golden armor and declares himself the Master of Mankind!  But Cap isn’t throwing in the towel just yet!  He tricks the Skull into letting him get close enough to throw himself upon the Skull in a last ditch effort to wrest the cube from him.  During the immense battle, Cap manages to knock the Cosmic Cube from the Red Skull’s hand and it falls into the sea!

The Skull dives into the sea to recover the cube, only to find himself sinking to the bottom under the weight of his golden armor!  The Skull is defeated and seemingly dead once again and the cube, possibly the most dangerous and powerful object on Earth lies hundreds of leagues beneath the sea, buried under more and more “bits of undersea flotsam and jetsam”!  But we all know that it won’t remain there forever!

This thirty page story line running through three issues of Tales of Suspense rates a full five (5) out of five (5) Legion Flight Rings from this reviewer!  A great story scripted by Stan Lee in his prime with beautiful Jack Kirby artwork!  It’s well worth your time and money to pick it up and add it to your collection!  Other less costly ways to enjoy the story would to be search out one of the reprints which have appeared since then.  You might want to search out Marvel Double Feature, issues # 3 through #5.  Or in the Essential Captain America # 1, from July 2000, or the more costly Marvel Masterworks: Captain America # 1, from 2003.