I WILL TELL YOU #34: San Diego Comic-Con – What An Enjoyable Ride

With all of the preparation required to attend San Diego Comic-Con, I unfortunately found myself lacking the time to compose a column this week. Despite that, you’ll find that there are a whole bunch of words below that indicate I must have found time to put something together. Just what did I do, you ask?

I actually wrote the following for the Comic-Con souvenir book back in 2004; this is the book that’s included in the bag o’ swag that’s handed out to every attendee at the con. Hopefully, loyal Back to the Past followers won’t mind the idea of a “reprint” in this space, but since this is the eve of this year’s Comic-Con and it’s likely many haven’t seen this before, this piece that speaks about the con’s cool factor seems fitting. Thanks for checking it out. 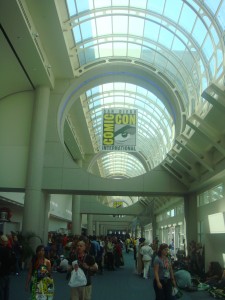 Wonders await both new and veteran attendees once they pass through the convention center lobby.

If this is your first year attending Comic-Con, you’ve probably been awestruck by the sheer enormity, diversity, and excitement of all that which is Comic-Con International: San Diego. Within the seemingly-infinite confines of the massive San Diego Convention Center is an equally-infinite array of things to buy, panels to attend, celebrities to meet. Amidst the sudden, overwhelming sensory overload of the best kind, you stand at the door, unsure of where to begin, but eager to take that first step into this pop-culture wonderland.

Now, if this is your 35th year attending Comic-Con, guess what? You’re just as awestruck as the first-timer standing next to you.

Take it from this ten year Comic-Con veteran: no matter how many times you’ve attended, it’s always impressive. Always. For the one thing Comic-Con International: San Diego has never failed to do is impress. In an ever-increasingly cluttered convention landscape, Comic-Con refuses to let itself be anything other than the comic industry’s premier attraction for fans and professionals, while remaining an inviting place for fans of other media, as well. Newcomers are easily amazed by the size and variety, but veterans of the first San Diego Comic-Con at the old U.S. Grant hotel in 1970 can’t help but be amazed when they realize just what an experience this incredible event, step by step, year by year, has become.

When the con moved from the old Convention and Performing Arts Center to its current location in 1991, the spacious 250,000 square feet of exhibit space seemed like the ultimate and permanent solution to Comic-Con’s growing popularity, and could easily accommodate the “mere” 15,000+ fans that attended. But in just three years, attendance had doubled and the once-spacious exhibit hall suddenly seemed very, very cramped. Even so, the con was already by far the largest of its kind, fans were already hard-pressed to see everything in just four days, and attendance for a comic-book convention couldn’t possibly surpass 30,000 people, right? 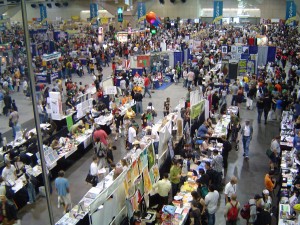 Comic-Con has always managed to fill whatever venue it's put in.

By 2001, attendance had hit a remarkable 60,000 fans. Comic-Con was beginning to choke on its own popularity. But not to worry; by this time, work of an incredible scope had begun on an expansion to the convention center. This expansion would add a near-incomprehensible 250,000 or so square feet of additional exhibit space, doubling its already impressive capacity. And in 2002, the newly upsized convention center opened its doors, and a lot more of them, to a relieved Comic-Con community.

Build it and they will come? Boy, did they. Additional exhibitors hurried to fill the newly available floor space, as did more and more attendees. All of sudden, Comic-Con was again occupying the entire convention center, and attendance was pegged at somewhere around 75,000. A comic book with a circulation like that would be a runaway success. 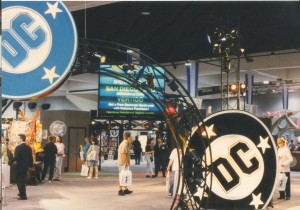 Despite the pervasive presence of other pop culture media, Comic-Con has long been the premiere event for comic fans and publishers.

Ah yes, comics. By virtue of its name, Comic-Con continues to proudly its origins as a comic book convention. And yes, even in this age of eBay and online retailers, collectors can still search for that elusive missing issue of their favorite comic the old-fashioned way, and to many, the more enjoyable way: by meandering up and down the aisles and searching for it, table by table. But Comic-Con caters not just to collectors, but to fans, and not just to comic book fans, but fans of entertainment. There is literally no better place on Earth where fans of Spider-Man, Star Wars, and Smallville alike can meet and mingle, buy and sell, listen and learn. It has transcended its status as a convention and become more of a social event among fans of multiple media and genres. This grand event is our very own Superbowl. 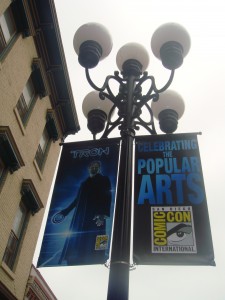 Banners like these are all over downtown in advance of and during Comic-Con.

And it’s with a Superbowl-like anticipation that this city; this beautiful, wonderful city; rolls out the red carpet for every single one of us. Downtown streetlamps are adorned with Comic-Con banners; buses with Comic-Con ads affixed to their sides spread the word throughout the town. The local media does its best to welcome us as well, although we could do without the Biff-Pow-Zap headlines and endless anecdotes about Mom throwing our old comics away. To fans of comics and pop-culture, San Diego has become synonymous with the ultimate in comics and pop-culture, much the same way New Orleans has with Mardi Gras or New York with New Year’s Eve in Times Square.

As thrilling as Comic-Con is on its own, it would not be what it is without the backdrop of the city it calls home, and one step outside of the convention center will tell you why. The city’s laid-back and peaceful atmosphere provide the perfect compliment to Comic-Con’s enormous growth; growth that has generated far more excitement within the convention center’s four walls than any sane person can withstand without an occasional break. It might be Comic-Con that brings fans worldwide to downtown San Diego, but once there, it’s the city that wraps its arms around them, and it doesn’t want to let go until they at least had a taste of what the city has to offer. And the truth is, fans are cheating themselves if they don’t take that taste. 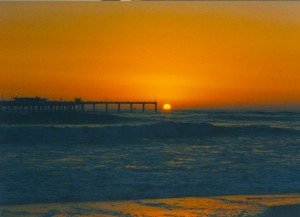 There's nothing like watching the sun set over the Pacific Ocean after a long and exhausting day at Comic-Con.

You may be asking yourself: “With so much to see at Comic-Con, how will I ever find the time to see anything else?” Well, the truth is, you probably won’t find the time; you’ll have to make it. But there’s one thing you owe yourself that won’t take any time away from the convention. If you’re not from these parts, immediately after the convention drive up the coast to one of the local beaches (Ocean Beach is especially charming) and watch one of the infamous West Coast sunsets. These scarcely go noticed by the locals but are a treat for us non-Californians. And you can even grab dinner, away from the crowded restaurants downtown. If you’ve got an extra day to kill after the con, then the famous San Diego Zoo is a must-see, as well.

If nothing else, during the con, set aside fifteen minutes each day for a leisurely walk along the harbor, behind the convention center. The near-omnipresent sunshine and seaside breeze will clear the mind of even the most sensory-overloaded fan. You’ll be glad you did. Guaranteed. 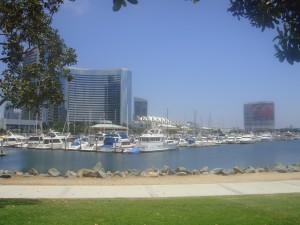 The convention looks so much more peaceful from out here.

Or, if your feet are already nothing more than two swollen, burning appendages begging for mercy after hiking through the aforementioned half-million square feet of convention, then take in that sunshine and sea air while seated. But with 80,000+ people expected to pass through over the course of four days, you’ll probably find yourself sitting next to one of your fellow fans. And you just might get to talking. And you just might be kicking off a new friendship. Because as Comic-Con has proven time and again over the past 35 years, with so many of us under one roof, it’s pretty hard not to meet people with some degree of common interest.

Of course, some come to San Diego seeking more than friendship. Romance? Nope. Employment. Long regarded as the industry’s premier event, by default it also has become the industry’s biggest job fair. Not that there’s many jobs to be had, but for those looking for that lucky break, there’s no better chance to get it than here. Many hopeful creators make the trek in order to sell their talents to a willing editor, and while most go home without a new career, there are those who have landed assignments in this highly coveted and competitive business, because they attended Comic-Con.

Whatever the nature of these newly-forged relationships; personal or professional; one thing can be said: it’s these relationships that define our memories of Comic-Con. Sure, we’ll all come home with a stack of comics and a bag full of souvenirs. But while the convention and the city itself serves as the cloth on which these memories are painted, the interactions we have with our peers or our idols are what we bring home, and are what leaves impressions that are slow to be forgotten. Memories are to be cherished most of all, because, in the end, they’re the only things we can ultimately take with us.

So, to wit: there is just too doggone much to see and do and experience in your time here. So make the most of it. Think about the kinds of memories you want to take home with you, and then plan your activities around it. Review the floor plan. Look at the panel schedule. Leave time for lunch. Take breaks. See the sights. And don’t be in a hurry just to get to that next table or obtain that next autograph. Enjoy the moment, for while Comic-Con International: San Diego might be a rollercoaster ride, remember what you’re supposed to do on such a ride: enjoy it. Plan it so you can.

Category: Comic BooksBy Jim JohnsonJuly 19, 2011Leave a comment
Tags: I Will Tell You