Welcome back!  It’s time for a new RETRO REVIEW and this week I’m stretching the review over two separate comic titles.  First up is Tales of Suspense #80, then secondly Tales to Astonish #82.  Well to be completely honest, I’m only looking at half of each of those comics.  As most of you know, the two Tales books were split books.  Suspense featured Iron Man in half and Captain America in the other half.  Astonish starred the Sub-Mariner in half and the Hulk was featured in the other half.  I’ll be looking at the Iron Man story in Suspense and the Sub-Mariner story in Astonish.

If you’re interested in the Captain America story from that issue of Tales of Suspense, then please check out my RETRO REVIEW, that you can find here: https://gobacktothepast.com/retro-review-tales-of-suspense-79-81/.

The first part of this two part story that crosses over between the two comics takes place in Tales of Suspense # 80, the Iron Man story.  The story is entitled; “When Fall The Mighty”.  The cover of this book is pencilled by Jack Kirby with the inks by Don Heck, but as the cover features Captain America, I won’t show it here.

The story is written by Stan Lee, with the pencil artwork supplied by Gene Colan and the inks are by Jack Abel, though he was going under the pseudonym, Gary Michaels, at the time.  The story starts up right where the previous issue ended, with the Sub-Mariner breaking into Iron Man’s lab, well I guess technically it’s Tony Stark’s lab, if you want to split hairs about it.

Iron Man is on the verge of exhaustion from the previous issue’s battle with the Warlord Krang, and then here comes Subby without warning and he attacks Iron Man before Tony can recharge his transistors.  The first five (5) pages of this twelve (12) page story is an all out battle between the Sub-Mariner and the weakened Iron Man.  Needless to say, Iron takes the worst of things.

Right before Iron Man is totally defeated, he tricks Subby into tossing him into another, steel reinforced room, which Iron Man is able to lock before Subby can set upon him again.  Tony quickly works to recharge and Lee gives us a two page flashback to the previous issue, to keep the readers up to date with how the heroes got where they are.

Once Iron Man is recharged he leaves the room only to find the Sub-Mariner gone!  He has gone to find water to replenish his strength and he vows to return and humble Iron Man.  The issue ends here and Stan tells us via a caption that the second half of the story will be found in another comic entirely and on sale now!

Which brings us to Tales to Astonish #82.  Here’s that cover for you: 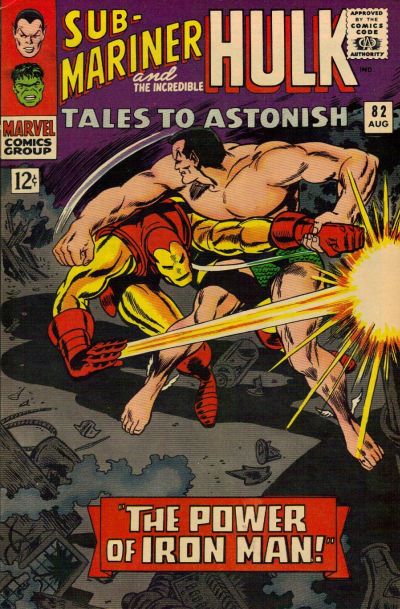 The cover is pencilled by Gene Colan and inked by Dick Ayers.

The story that we are interested in is the Sub-Mariner half of the book and the story is entitled: “The Power Of Iron Man”.  It is plotted by Stan Lee, but the script is by Roy Thomas.  Gene Colan pencilled the first two (2) pages but apparently got sick, so Jack Kirby, had to step in and pencil pages three (3) through twelve (12). Dick Ayers provided the inks for all twelve pages.

This half of the story also kicks off with a bang, as well.  Sub-Mariner has returned to land, after refreshing himself in the water, and Iron Man is completely recharged from the recent battles in his comic.  And things begin with the two heroes, well, one hero and one anti-hero, charging each other.  Colan gets to draw the first two punches as Iron Man lashes out.  From there, Kirby takes over and moves the battle into hyperdrive!  Iron Man uses his repulsors, but Sub-Mariner charges back into the fight enraged!

Over the next nine (9) pages we get to see Iron Man and Subby trade blows, with first one getting the upper hand then the other!  But rather than getting to see who is the ultimate victor, Lee and Thomas has Subby spot Warlord Krang’s ship, so he breaks from the battle to chase Krang and the Lady Dorma.  Iron Man is left to return back to his factory and return to his Tony Stark identity, until Iron Man is needed once again.

What a great issue, and in typical Marvel Comics Style, there is no true resolution as to who won the fight between it’s heroes.  It was really great to get to see Kirby draw the awesome fight between Iron Man and the Sub-Mariner, as well.  I like Colan’s work, but there is just something about Jack Kirby’s artwork that takes it up another notch or two when he let’s it all hang out!

That’s it for this week’s RETRO REVIEW, but please come back next week for a brand spanking new Fabulous Find.  Be seeing  you …