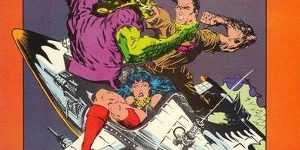 This week, I’m looking at an independent comic book. So digging for something unusual, I’ve unearthed, Tex Benson # 1, published in 1986, from a little known comic book company called, Metro Comics.  Metro Comics seems to be the comic book publishing arm of S.Q. Productions, Inc., owned by Sal Quartuccio.  S.Q. Productions was mostly known for publishing inexpensive prints and portfolios during the 1970s and 80s.

Here is the cover to the first of a four issue mini-series that Metro Comics published in 1986 & ’87: 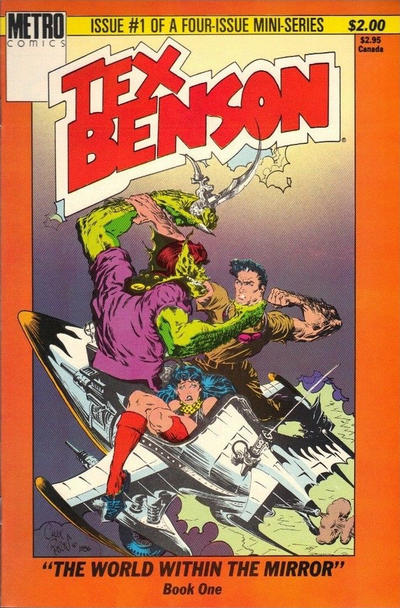 It’s a kind of strange comic book.  Definitely a science fiction, rather than super-hero book.  The whole thing is the brainchild of creator, Chuck Roblin.  He provided both the pencils and inks for the cover above.  He also wrote, pencilled and inked the story within.  I even think he provided the lettering, as well.  The only thing he didn’t do was color the cover, I believe.

Roblin was an unusual talent, to say the least.  He may not be the best technical figure artist, but he more than makes up for it with his enthusiasm.  His panels are crammed to the brim with backgrounds that look like they might have been influenced by Jack Kirby or maybe more likely Wally Wood.  His men are not handsome, but his women are sexy.  Well, he’s trying to make them sexy.

This issue number one (1) is the first of a four part mini-series that Metro published.  The overall title to the storyline is; “The World Within The Mirror”.  The first issue contains the first three (3) chapters of the storyline.

The tale begins on the star cruiser, Avenger, settling into orbit around the planet, Scorpia.  The ship is piloted by Captain Tex Benson, who quickly lands and rushes to visit Princess Azora, who has legally proclaimed that Tex is her fiancee, much to his chagrin.

We, the reader, meet Princess Azora, or as she refers to herself, Zori J, on page three (3).  She is lounging in bed with her sentient pillow (softie) pals, Phoo Phoo and Shylah watching the disc-a-vision.  Don’t ask me to explain them, because I can’t!

Roblin then jumps to another planet, many light years away, where we find Hydra Van Flynt, director of the Hellfire Sanitarium, and the villain of the piece!  We get to see just how rotten she is and witness her use of the dreaded Thought Enhancer.  It seems that Benson had just returned from stopping one of her slaver ships and now she is out for revenge.

Then we’re back on Scorpia and get the lowdown on Zori J and Tex Benson’s relationship.  She wants him for a husband and he doesn’t want anything to do with her.  But since she the Princess, she’s used to getting what she wants.

As this first issue ends, we see Benson fleeing the Princess, but ultimately being caught.  Also we see Hydra Van Flynt put here plan for revenge against Benson into place and she takes off from her planet to put her plan in motion.  So the first issue, of the four issue mini-series ends with this cliffhanger.  But the basic plotline of the hero, Tex Benson, finding himself between two luscious gals, who are out to get him is firmly put in place, with space as the backdrop.

Metro Comics only managed to published ten (10) comics.  I think I own seven (7) of them.  The four (4) issues of Tex Benson and three (3) issues of Wild Things.  So they didn’t last long at all.

But Tex Benson resurfaced in 1990, when 3-D Zone published a second four (4) issue run.  Again the whole thing was produced by Chuck Roblin.  I’m not sure of any other comics he had published, but if you know of any, please let me know.

Thanks, as always, for taking the time to read my posts.  I hope you learned something you didn’t know with this one!  I’ll be back next week with a new Fabulous Find and again in two weeks for another RETRO REVIEW.  Stay warm this winter and I’ll be seeing  you …