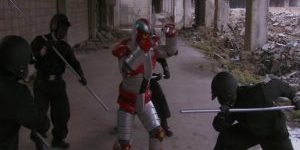 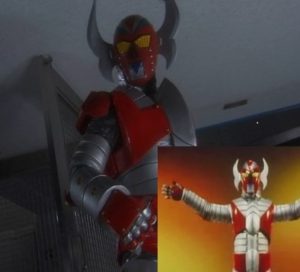 The criminal syndicate known as Sigma is out to conquer the world and only Japanese secret policeman Yutaka Diamon stands in their way.  With the help of his robot partner/motorcycle/kind-of sibling Zaborgar, he beats them…but falls in love with Sigma’s lead female enforcer before she is tragically destroyed. Many years later, he’ll have find it within himself to be a hero once more in order to save the daughter he never knew. 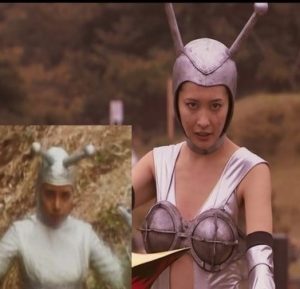 The film is directed by Noboru Iguchi and based on the 1974 toku series Denjin Zaborge. While everything in the film has a basis in the original series (see the pictures for comparisons, courtesy of the film’s end credits), it’s filtered through a lens that is equal part the high camp style of Batman: The Movie and Flash Gordon and whatever the hell is wrong with Iguchi*. It ends up a very, very strange movie…but it works.

*Some of Iguchi’s films: RoboGeisha, Mutant Girl Squad, the “F is for Fart” segment of the ABCs of Death, and Zombie Ass: The Toilet of the Dead.

This movie…is hard to classify. It is so weird by American standards that it’s almost an artsy foreign feature, but at the end of the day it seems more the Japanese equivalent of Seth Rogen’s Green Hornet than anything else. I wouldn’t actually recommend it to the uninitiated, but the film certainly is worth at least one viewing. 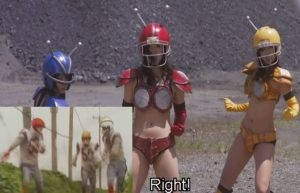 ….how did he get “sexy girls” from “football player robots”?