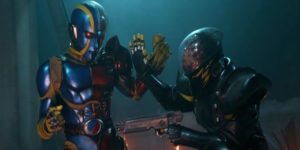 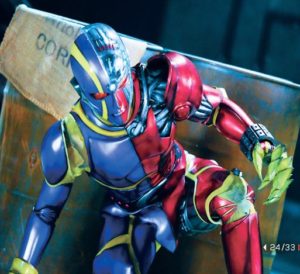 Welcome to Tokusatsu Gesundheit, where Shotaro Ishinomori is as respected as Stan The Man. Today’s subject is the gritty movie reboot of one of his classic creations, 2014’s Kikaider Reboot.

Newly orphaned siblings Mitsuko and Masaru Kohmyoji are attacked by the government agency that employed their late father – the ominously named Project: DARK – and are rescued by a mysterious android named Jiro AKA Kikaider. Jiro was created by their father complete with an artificial conscience and he’s on a mission to protect them – and an research-laden microchip hidden in Masaru’s body – from their father’s corrupt colleagues. 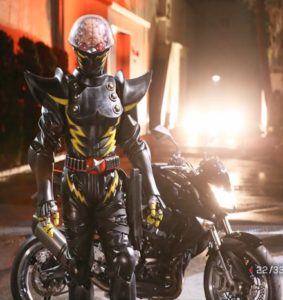 Kikaider’s nemesis, Hakaider, who starred in his own movie in the 90’s.

Android Kikaider was created by Ishinomori in 1972, running for 43 episodes and spawning a second season/sequel series entitled Kikaider 01. It has since been adapted as a manga, a 13 episode anime TV series, a four part anime OVA, and an anime OVA crossover with fellow Ishinomori creation Inazuman. It’s fairly popular in Japan.

It’s apparently HUGE in Hawaii. The original Kikaider aired, with English subtitles, in Hawaii roughly concurrent with its Japanese airing and alongside other shows such as Kamen Rider V3 and the aforementioned Inazuman. A Honolulu-based translation company, JN Productions, has a side venture named “Generation Kikaida” (using an outdated Romanization) that subtitles and sells DVD sets of the aforementioned titles as well as this film. They also have a store, with Japanese import collectibles relating to the shows, at their office in Hawaii.

Who wants to go with me? What stores buy movie collectables near me?

The film is a solid super hero movie, though with the less-impressive-than-American special effects evident in most Japanese superhero films. It tells a compelling story, features good action sequences, and leaves room for a sequel while still finishing its tale. It’s definitely worth a look, and the fact that the DVD would come straight from dedicated fans in America’s tropical paradise should be a bonus. 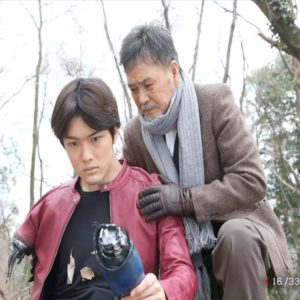 NEXT WEEK: We continue to watch “big” budget Japanese superhero movies with Gatchaman.